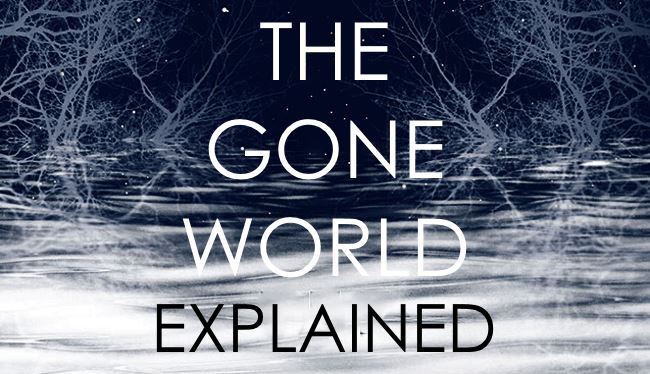 The Gone World is a 2018 book written by Tom Sweterlitsch. It’s a Science Fiction novel that deals with both time travel and multiple timelines. The lead character, Shannon Moss, is part of a Criminal Investigative Service who is assigned to solve a murder. A NAVY officer’s family has been butchered, and his daughter is missing. Shannon uses time travel to try and save the life of that young girl, but as we all know, when you travel through time, shit happens. Here’s the plot summary and The Gone World ending explained.

Heads Up – The Gone World spoilers ahead. 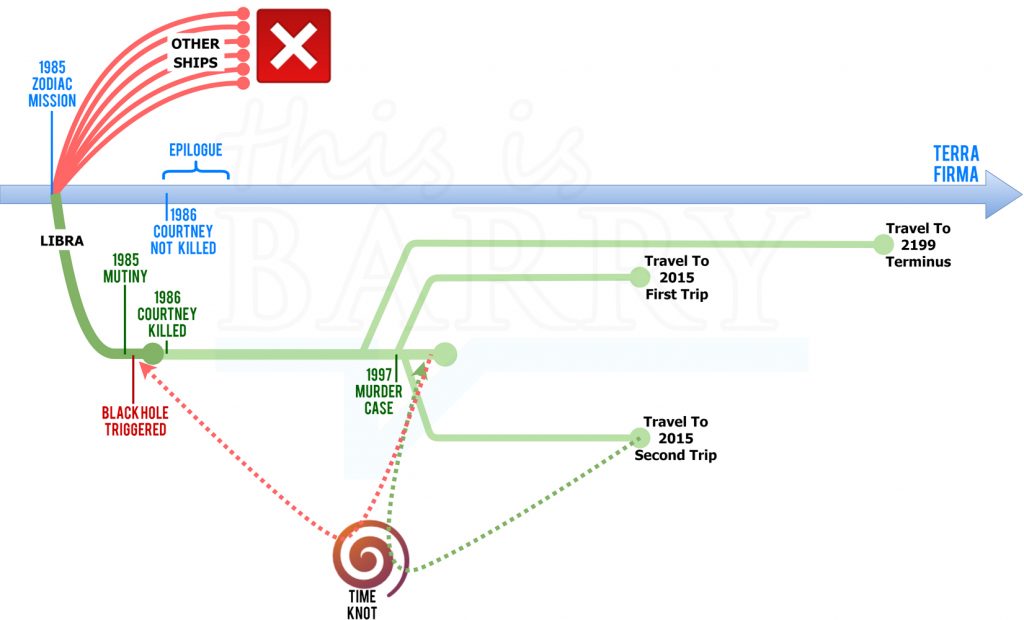 The Terminus is an event in the future, which is marked as the end of the world. Small particles termed as QTN (Quantum Tunneling Nanoparticles) enters every living person and drives them crazy and it kills all life. It’s a white hole event that brings everything to catastrophic end. Based on some estimates, the Terminus is marked to be about 200 years into the future. But the date keeps advancing as the story proceeds.

Let’s understand how time travel and its consequences work in this book. When a traveler goes forward in time, (s)he lands up in an IFT. Now, what is an IFT? Well, it’s a timeline that is born as a result of traveling forward in time. But this timeline, like the Schrodinger cat, both exists and doesn’t exist at the same time. Let me elaborate. As long as the time traveler stays in the future, that timeline or the IFT will exist. Soon as the time traveler returns or dies, the IFT, or timeline, will cease to exist. Events on this IFT are only possibilities. This means that the Original Timeline, called the Terra Firma, will not necessarily go through the same events of the IFT.

The Gone World: Butterfly in a bell jar

This concept is that in case someone on the IFT gets to know that there is a time traveler, that person realizes that their entire reality is only an IFT. And that soon as the traveler heads back, their reality will collapse. To ensure that doesn’t happen, that person might capture the time traveler and keep him/her alive to preserve the IFT. Time travelers need to ensure that they don’t get themselves into this scenario.

The Gone World: Esperance, Libra, and the Mutiny

In 1985, Libra was one of 12 ships part of the Zodiac Mission that was commissioned to travel into the future. Unfortunately for Libra, they found themselves in the vicinity of a planet called Esperance that was being consumed by the Terminus. The officers on the ship were – Patric Mursult, Karl Hyldekrugger, Elizabeth Remarque, and a few others. Nicole Onyongo is a person from a far future that joined the ship and its crew, abandoning her own IFT.

After realizing that the Terminus is latched on to Libra, Remarque suggests that they should all head to a far future and commit mass suicide. That way they don’t go back to Earth, they don’t take the Terminus back with them, no one gets to know about Esperance, and Earth will be safe. While one part of the crew is okay with this, Karl, along with his supporters, kills Remarque and everyone in favour of the suicide. They do this merely because they don’t want to die. Libra gets caught in a time knot on Earth after this. This time knot brings together multiple IFTs and times together at one place. The crew of Libra moves on and lives under the radar while Earth thinks Libra just disappeared.

In 1986, Shannon is a young girl living her peaceful life, hanging out with her close friend Courtney. One day Courtney is murdered by a mugger for her money. Shannon is broken by this and decides to join the Criminal Investigative Service.

Shannon and the Terminus

Over the years, Shannon becomes fluent with time travel. But in one of her trips to the year 2199, this Shannon is infected with QTPs, and she dies. This is how the book opens. Thanks to the time knot created by Libra, the rescue team saves another Shannon and brings her back. However, she loses her leg because of the QTP infection. This Shannon is who we will follow through the rest of the plot.

Years later, in 1997, Shannon is assigned a case where Patric Mursult’s family has been slaughtered and his daughter is missing. By the way, Patric’s family was killed because he decides to go to the authorities with the truth about Libra and the mutiny. Karl doesn’t like this, and he has Patric and his family killed. Unable to find any clues leading to Patric’s daughter, Shannon is sent forward in time to understand from past news as to what happened to the girl.

Shannon arrives in 2015 and lives in that IFT for many months. She befriends Nicole who eventually tells Shannon about Libra and the mutiny. Shannon also meets with Nestor, who was assigned to the Patric case in 1997. She has a romantic encounter with him. After finding out where Patric’s daughter’s body was found, Shannon returns to 1997.

The Terminus is much closer

On getting back to 1997, Shannon is told that the Terminus is now estimated to occur in a couple of decade’s time. Now, this is because of Shannon getting information that enables NSC to get to Libra. No one knows why Terminus is closer, but they do know that whoever has been involved with any case having to do with the crew of Libra are being killed. Unknown to them, Karl is the one behind these murders.

Now, remember, the in the previous trip to 2015, Shannon went to one IFT. In her second trip, she arrives in a different IFT. In this IFT, Nestor is working with Karl. Shannon doesn’t realize this and gets caught and handed over to Karl. Just as he is about to kill Shannon, she announces that she’s from the past and killing her will make the 2015 IFT disappear. Karl drags her through the time knot to Libra. Shannon passes the field where she sees a dead version of herself being consumed by QTPs. This dead Shannon is the initial Shannon we are introduced to in 2199. Karl also tells Shannon that the reason the Terminus is getting closer is that the NSC is too greedy and once they find out about Esperance, they will head to that planet. Hence Karl is killing anybody who gets to know about Libra and Esperance. Inside Libra, Karl locks up Shannon like a butterfly in a bell jar.

On the Libra and Nicole

We don’t know the date, but Shannon is at a time when the mutiny is happening on Libra. Shannon meets a very young Nicole and asks for help but gets none. Moments later, much older version of Nicole shows up to help Shannon claiming that they had met days before. Now, remember that Libra is caught in the center of the time knot thanks to the time-travel engine on board leading to multiple IFTs. Older Nicole, like the crew of the Libra, can navigate the time-knot to get to the ship. Shannon gets free and passes through the time knot to get back to her time.

Here’s where things go ape shit crazy. We have lost count of the number of IFTs that Shannon has passed through to get to 1997. Even though she doesn’t take her time machine back to 1997, she has somehow returned precisely to where she left from.

When Shannon gets back, she tells people about Karl and how NCS will be responsible for the Terminus. As expected, in a couple of days, a crew that headed to Esperance brings back the Terminus. The world begins to end. Shannon enters the time knot and finds her way back to Libra, at a time when the mutiny was happening.

Shannon finally realizes that since the time Libra first traveled to the future in 1985, everything that has happened with the Terminus is inside an IFT (which child IFTs). The entire story we’ve been witnessing has been an IFT. Which means that if the Libra crew died during the time of the mutiny, this IFT and all the child IFTs leading to the Terminus being brought back would disappear. Shannon learns of a black hole that Elizabeth Remarque was trying to set off on the Libra to kill everyone. Shannon gets to the device and triggers that black hole wiping out Libra and everyone on it. In this process she erases her IFT and everything that goes with it.

With Libra being wiped, the actual Terra Firma, the Original Timeline, proceeds with the only information that Libra simply disappeared. Nobody, including Shannon from the Terra Firma, knows anything that happened in the IFTs. Basically, every chapter before the epilogue in the book… never happened. Let that sink in. So, it’s a year after Libra took off from Earth and was eventually consumed by a black hole, Shannon is a young girl, and it is the year 1986. This is the Terra Firma, or so we are made to believe.

Unlike the IFT, though Courtney was mugged and slashed, she didn’t die. As a result, Shannon never joined the Criminal Investigative Service or became a time traveler. That said, time travel has still been invented, and eventually, shit will hit the roof. Shannon does notice strange footsteps on the snow around a tree, and this understandably could be an anomaly created by a time knot. But we aren’t told more. This feels a lot like Source Code. Also, Shannon has been dating Courtney’s brother and is now pregnant. The book ends with a naive Shannon thinking about how he would propose to her, and how they would live happily ever after.

The epilogue shows a sharp contrast in the personalities between the Shannon we have known, and this young girl. This is because she has not yet been through the terrible things that mold her into the woman she will become. While in this Original Timeline she may not encounter the Terminus, she is still going to face a world of issues if Courtney’s brother abandons Shannon and her unborn child.

Initially, the announcement on the Gone World Movie was that the Neill Blomkamp would be directing it. Right now, that declaration has been reverted. Considering the kind of storytelling and visuals this film is going to have, it’s going to need a director who is highly skilled with Science Fiction. It would make for a great movie, and hopefully, the right team will work on this.