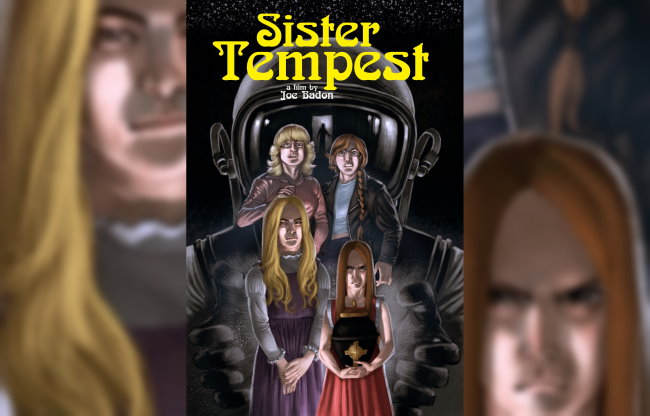 Sister Tempest, the 2020 film by Joe Badon, is a mix of so many things, it’s hard to describe in a paragraph. The movie deep dives into the mind of Anne, a troubled woman whose estranged sister has gone missing. It’s a visually spectacular journey of Anne’s tumble down the rabbit hole seeking the truth (yes, I stole that line from Morpheus).

Where To Watch Sister Tempest

The filmmakers are currently touring Film Festivals, and you can go to the film’s website below to see the upcoming tour dates:
https://sistertempest.blogspot.com/

I had a conversation with the director, Joe Badon, about this intriguing film and here’s what he had to say.

This Is Barry: Hi Joe, thanks for doing this interview. Sister Tempest is one heck of an artistic psychedelic mindjob, and I’m still processing many of the subtler details. It’s fantastic to have a movie replay in your mind for a few days after having watched it. Congratulations on putting together something so remarkable. So, how did it all happen? How did you conceive the story and the visual concept?

Joe: Thank you so much! When I made The God Inside My Ear, I was kind of trying to make a “palatable” and “marketable” film (if you can believe that lol). After I made it, I was totally happy with it but I wanted to make something that was really just for me and really from my soul. Something deeply personal.

And Sister Tempest is what came out, ha!

But, even though it has a lot of personal meaning, most of the story and style elements come from various films that I love. The original idea for the plot was inspired by Robert Altman’s Three Women with a healthy dose of The Twilight Zone. I wrote the (very) basic outline for the story a few years ago and then put it on the shelf.

Then I watched The Monkees’ Head for the first time about 2 years ago and that movie floored me. It was then that I decided that I wanted to make a film that had that same energy and chaos but with a stricter narrative to follow.

A lot of the visual and style elements were cherry picked from my love of a bunch of wildly different films. I kept telling the cast and crew that I wanted this movie to be a “cinematic mixtape” with contrasting genres and styles all layered on top of and rubbing up against one another. So I was referencing everything from Holy Mountain and Dada Experimentalism to Barbarella and The Evil Brain From Outer Space.

This Is Barry: Wow, that’s quite the mash-up! How many hats did you wear in the making of Sister Tempest apart from writer and director?

Joe: So many hats! LOL I did Storyboards, Concept Art, Set Design, Costume Design, Props, Line Producing, Casting and Location Scouting. Me and my wife, Tonya, did the wardrobe. I helped A LOT with set construction and costuming. There were one or two days I was even boom op and gaffer. It was wild.

But I definitely could not have done it without everyone’s involvement! And everyone worked on it like it was their baby which made working on set so very special.

This Is Barry: Kali Russell is brilliant in the film. A lot of heavy lifting there. How did you find each other?

Joe: Through actor Linnea Gregg. Linnea knew I was looking for the lead actor and she messaged Kali. And Kali auditioned and NAILED it!

This Is Barry: Linnea Gregg, who played Elizia in The God Inside My Ear, takes on a more menacing role in Sister Tempest. Curious to know, did you already know that the character Ginger would be a singer or is that something you decided to add because Linnea has a great voice?

Joe: Linnea was always singing on set on The God Inside My Ear so I knew she could sing. Also, I knew her emotional range from the last film so I basically wrote that part just for her.

This Is Barry: Linnea was brilliant; the swing in her character was chilling! Would you like to talk about the metaphor associated with the name Ginger Breadman, or would it be too spoilery?

Joe: A gingerbread man is basically an homunculus in bakery form. I guess that’s as non-spoilery as I can be, lol.

This Is Barry: LOL, moving on then. The visual presentation in Sister Tempest is most intriguing. It’s never just one scene but always a layered collage of inter-spliced footages animated and otherwise. I loved it! My favourite scene in this regard would be the argument between the sisters. How did you conceive this idea?

Joe: The idea for intersplicing old footage was inspired by the film LIKE ME (2017).

Before we started editing, I showed Joseph Estrade, the editor, two films: LIKE ME and The Monkees’ Head. If you take those two movies and put them in a blender and set the blender to ‘puree’ then you’ll basically get the editing style for this film.

But I am fascinated with the idea of layering scenes. A lot of that was inspired by my love of experimental music, particularly John Zorn and Sufjan Stevens.

John Zorn’s work with his band Naked City was inspirational because his compositions would be constantly genre hopping (from Jazz to Death Metal to Country to Classical, etc…) and I wanted to represent that same idea in film form.

As for Sufjan Stevens, his album Age of Adz shows a layering of Pop and Noise and Folk and Techno. He was taking all these contrasting elements and stacking them on top of one another. I was fascinated by that and wanted to do something similar cinematically.

This Is Barry: The sound production in the film is incredible. The ups and downs are so unpredictable. Was this done to mirror the state of Anne’s state of mind?

Joe: In the end, I guess it was BUT a lot of my creative process comes more from instinct than intent.

Really, I was mainly just trying to make every facet of the film constantly contrasting, constantly changing, constantly off balance – From Sound Design to Editing to Acting to Dialogue to Plot Structure, etc… because, instinctively, that’s how I felt the overall tone should be.

And, in the end, this does completely reflect Anne’s shattered mental state.

This Is Barry: Apart from the actual eggs, are there other easter eggs in the film? Things to look out for when watching the Sister’s Tempest a second time.

Joe: There’s lots of little easter eggs in the film! Early on in the film, there’s lots of flash forwards and allusions to future events that I think most viewers won’t catch the first time around. For example, the opening voiceover at the very beginning of the film happens again towards the end of the film and you might not notice it on the first viewing. Also, lots of the public domain footage and old cartoons relate in some way to the themes in the film that you might not see until you’ve watched it a few times. There’s also lots of spiritual symbolism that I hope speaks to people the more times that they watch it.

This Is Barry: I loved the subtle placements. My favourite was the books by the side of the bed which put a lot of things in perspective. So, what’s your next project, and what is it going to be about?

Joe: I have a few scripts I’m about to start pitching around for funding. One is a Mini-Series that I would describe as 2001 meets The Wolfman meets Holy Mountain.

Another film I’m pitching is like a weird Flowers in the Attic.

Fingers crossed that somebody will wanna give me money to allow me to make more of this shit, lol!