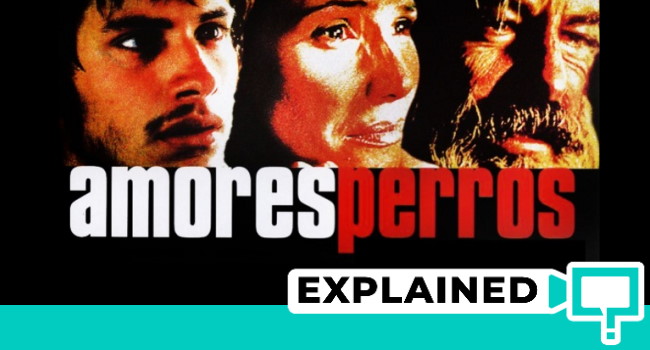 This is a Mexican film directed by Alejandro González Iñárritu. The plot brings together the lives of three sets of people because of one accident. In India, Mani Ratnam directed Ayutha Ezhuthu / Yuva which was also based on a similar premise. However, the stories have nothing to do with each other as such. Title of the movie translates to “Love’s a bitch”. Here’s the explanation of the film Amores Perros.

Octavio lives with his mother, brother Ramiro and his brother’s wife Susana. They are a poor family. Ramiro is employed in a supermarket but commits robbery of small stores to make a few extra bucks. He cheats on his wife with a co-worker at the supermarket. Octavio loves Susana and wants her to run away with him. She says no at first but is eventually shown to agree with the plan. Cofi is Octavio’s dog. One of the instances Cofi is loose, he wanders into an area near a dog fight. Jarocho, the villain of the story per say, happens to have won a dog fight and sees Cofi. He thinks he will have some fun unleashing his winning dog on Cofi. However, Cofi destroys his dog. Jarocho is pissed off (for his own stupidity) and goes over to Octavio and demands for money. Octavio realizes Cofi’s strength and starts making loads of money at dog fights. Jarocho’s dogs constantly get killed by Cofi. Octavio and Susana are shown to regularly make-out and part of the winnings are stashed in to their “run away” savings. Susana, however, is never sold into the concept of leaving Ramiro and running away. She needs sexual release and Octavio means nothing more to her.

Ramiro finds out about Octavio winning at the dog fights and demands a part of the winnings. He threatens to kill Cofi otherwise. Octavio uses his dog fight connections and get Ramiro beaten up pretty bad. Octavio thinks that he is at the top of his game but Susana and Ramiro decide to leave. Susana takes all of the “run away” savings and leaves. This pisses off Octavio, quite obviously. Jarocho comes back with a high stake private dog fight challenge and Octavio agrees. The fight starts Cofi begins to win but Jarocho shoots Cofi. That was his plan all along, to kill Octavio’s winning dog and put an end to the streak. In retaliation, Octavio stabs Jarocho and makes a run for it. Does Jarocho die? We don’t know, we are not shown. Octavio and his friend Jorge are chased by Jarocho’s men. This is the opening sequence. Cofi is bleeding out but is not dead. Octavio cuts a red light and smashes into another car. While Octavio ends up being badly hurt, Jorge dies.

Days later, Octavio is recovering. Ramiro decides to loot a bank. Unfortunately for him, a cop is in the bank and the cop’s partner enters and shoots Ramiro. A funeral is held for Ramiro. Octavio doesn’t care for his dead brother but he does confront Susana for running away with their money. Octavio still feels he has a shot with Susana. She tells him that it was never “their” plan but only “his” plan. Octavio tells Susana to meet him at the bus stop where they will run away to Ciudad Juárez. But she doesn’t show. Octavio gives up and doesn’t enter the bus either.

The car that Octavio smashes into belongs to a model Valeria. Let’s take a quick rewind into her story. Valeria is having an affair with Daniel who is a successful magazine editor. He’s also married with two kids. He leaves his family and moves in with Valeria and her dog Richie. There is not much of an event leading to the accident. Valeria happens to be driving to meet her client and as she gets her green signal, she begins to move her car and Octavio smashes into her. She just gets unlucky.

Valeria’s leg is broken severely and she’s admitted in the hospital. She eventually comes home in a wheelchair with her leg casted in external support. She needs to take rest and heal but is losing out on her current modelling contracts thanks to her situation. She initially seems to take things in a positive light living with Daniel. One day, her dog Richie enters an open floor board and doesn’t surface back. While Richie means a lot to Valeria, it doesn’t mean anything to Daniel. The two of them periodically hear Richie’s whining under the floor. They try calling out to the dog but they aren’t able to locate it. A combination of Valeria’s situation and her missing dog makes her get frustrated. She gets off her wheel chair to lie down and look for her dog. She further injures her leg.

One night the two of them hear Richie’s whining again and they break out into a fight. Valeria feels Daniel is not doing enough to save her dog. Daniel doesn’t want to rip up the entire flooring for the sake of the dog. Daniel leaves in the morning for work. Valeria has locked herself into her room and has fainted. Her rashness causes too much damage to her legs and the doctor is forced to amputate it. Daniel gets back home and repents not finding Richie earlier. He follows the whining, breaks open the floor and locates the dog. Valeria loses her leg and her modelling life as a result. Daniel is shown to repent leaving his wife.

Let me start with how this story is connected to the accident. The lead of this story is the guy who looks like a hermit beggar. He is actually El Chivo – the goat, a skilful hitman. One of his hits gets interrupted by the accident. Soon after the accident, Chivo sees Cofi badly wounded, he takes him and exits the scene of the accident. Here’s a quick rewind into Chivo’s past. He was once a normal person, a school teacher. But soon gets swayed and joins the on-going guerrilla movements. He participates in various terrorist activities, gets imprisoned for 20 years. He abandons his wife and 2 year old girl for the sake of the guerrilla movements. His wife tells her daughter a lie that her father is dead, not arrested. 20 years later, he gets out of jail and with the help of a corrupt police officer – Leonardo, he becomes El Chivo and takes up a full time career in hitmanery.

Note : This Leonardo is the same one who is at the bank and results in Ramiro getting shot dead. There is no correlation though, just coincidence.

El Chivo looks and lives like a beggar. He lives with a lot of dogs and loves them a lot. Jarocho tries to first unleash his winning dog on El Chivo’s dogs before stumbling onto a lost Cofi. El Chivo pulls out his machete and Jarocho backs off. Chivo takes up a few hit jobs on the side. Once such job is for a businessman who wants his partner dead. It is during this hit attempt that the accident happens and El Chivo gets interrupted.

Chivo attends to Cofi’s bullet wound and nurses him back to health. Little does he know who Cofi is. He’s a dog whose only interaction with other dogs has involved killing them. Quite naturally Cofi kills off all of Chivo’s other dogs one fine summer afternoon. Chivo is angered and wants to kill Cofi but forgives him. Chivo captures his hit target, he also captures his client, ties them up and leaves a gun between them to resolve their differences. We aren’t shown what happens to them. The point is – El Chivo doesn’t care anymore.

Chivo grooms himself and goes over to his daughter’s place and breaks in. He leaves her cash and a message saying who he is and what happened to him 20 years ago. He walks away to start his new life with Cofi, who he has now named – Blackie.

Ending Explained: Commonalities in the Stories

Apart from the fact that an accident brings together three groups of people from different walks of life, each of the stories have their central element based on dogs. Yeah, dogs. Pun in the title.

Octavio’s greed for money and lust for his sister-in-law is fuelled by the money he’s making in the dog fights with Cofi. Octavio sees Cofi killing many dogs and is aware that it could be Cofi’s fate one day. But he doesn’t care. He is focused more on the money. That greed gets him into trouble with Jarocho which eventually leads to the accident.

After the accident, Cofi is with El Chivo. Had it been any other dog, it wouldn’t have changed Chivo’s life. But Cofi turns out to be a killer and kills all the other dogs. While initially Chivo is overcome with rage and wants to kill Cofi, he realizes that he too is a killer and murders people for money. The pain he feels when he loses his dogs makes him realize the pain he has caused to several others. He, as a result, doesn’t kill his target. He leaves it to his client and target to make their own decision.

While Valeria and Daniel are not connected to Cofi in any which way, they do have a dog in their life – Richie. If you take Richie out of the equation then Valeria would have perhaps not strained herself and may have even healed fully. Daniel and Valeria may have fought for other reasons but she wouldn’t have lost her leg like that. It’ true that Daniel may have been in that relationship only because of Valeria’s physical appearance, but the incident with Richie causes her to lose her leg and this adds a massive strain to their relationship. Daniel is shown calling his ex-wife but doesn’t say anything. That shows him repenting leaving her. Hey, I’m not blaming the dog, just saying what happened.