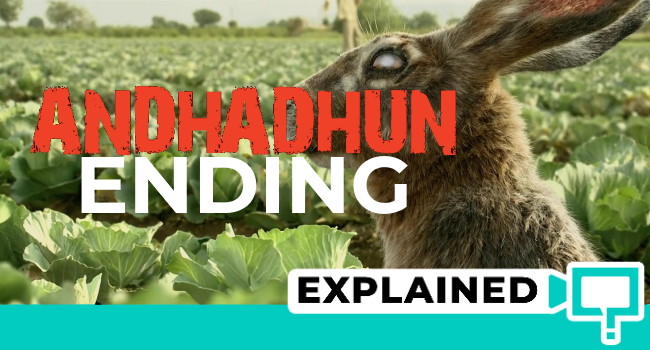 Here’s evidence to understand what really happened at the ending of Andhadhun, the directorial masterpiece by Sriram Raghavan. If you want the entire plot synopsis, go here – Andhadhun Plot: Things You Might Have Missed. Here’s the truth about what Akash did in the end. This is the Andhadhun ending explained, spoilers ahead. You can watch the film here.

Some Facts we know from Andhadhun

Akash is not all good. He’s someone who fakes having a handicap for fringe benefits. But that said, he does get entangled in an unfortunate turn of events for no fault of his. And as a result, has his eyesight taken from him.

Simi is shown to be evil. She is ready to kill anyone to save herself. She’s not bothered that her husband was killed because of her affair. She does not hesitate one bit to kill her nosey neighbour. She’s almost beating Akash to death. She almost stabs the doctor to death.

The police have stated that Simi has committed suicide and the media has built a solid story around it too. So no one’s going to be looking for Simi. Even if Manohar were alive, he’d just be happy if Simi disappeared.

Dr. Swami was saved by Akash, so he grants him two options:

The last scene – the can

In the end, we also know that Akash is not blind, thanks to that can shot. For him to have gotten his sight back, he would have needed a donor and an operation. He didn’t have the money for surgery and donors aren’t easy to come by. Even if lady luck smiled on him and someone got him his eyes back, he would have had no reason to hide that information from Sophie. His motive for lying is because of what transpired in that car.

Proof that Akash agreed to the doctor’s proposal

A friend from work, Bhavesh (you can check his food reviews – here) happened to hand me a very crucial piece of info from the film that provides proof to the fact that the doctor and Akash went ahead with their ploy involving Simi. Let’s go back to that scene where they drive away.

Here’s the frame we are shown the first time when we see the film as the narrative. After this, we are taken to two years later. The car does not stop. They drive on.

Here’s the same frame we are shown a second time when we see Akash’s backstory to Sophie as the narrative. The car stops.

It is when they stop that Akash claims Simi overpowered the doctor. But as per the film’s narrative, in reality, they never made the stop. Which means there was no death of the doctor, no hare, no accident, no explosion. That was all only part of Akash’s false story to Sophie.

What they did with Simi was a crime, and his faking blindness helps him cover that up. Akash owns a walking stick which has a hare head. I believe, over time, he’s cooked up the story of the hare that saved him to conceal his crime. Akash is shown to have no one in his life, definitely no friend who could take him to London. Remember when he’s blinded, and Sakku asks him if she should call anyone? He says he has “no one”.

We, as the audience, agree with the doctor. Sophie suggests the same too. It is natural that Akash also agreed with the doctor, and got his eyes operated from the cut of the money that he made, and bailed from the country. He possibly even has Simi’s eyes now. There you go, the Andhadhun ending explained, with proof. Now you can get that good night’s sleep. If you would like to read more about the plot, do check out – Andhadhun Plot: Things You Might Have Missed. 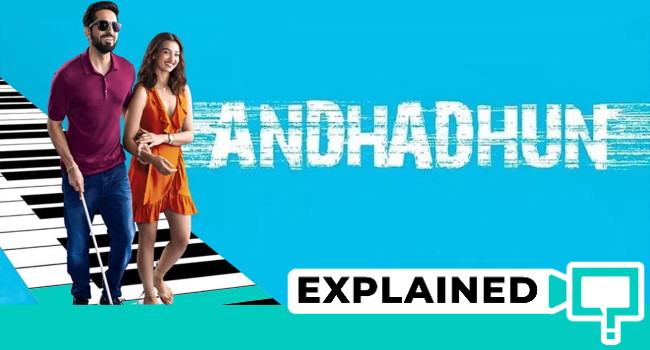 Another interesting Bollywood film, although supernatural, is Stree. Do check it out.