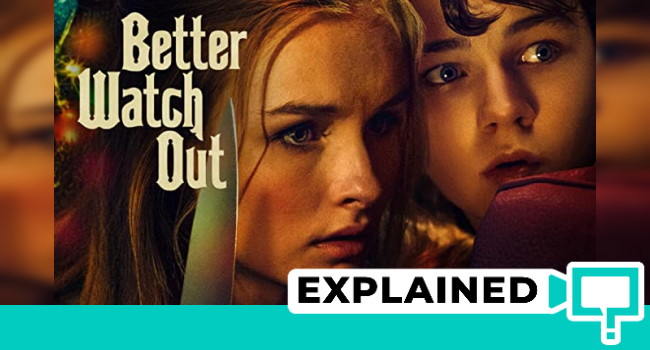 Better Watch Out: A trailer that made you think this was some kind of a funny Home Alone remake unfolds into a movie that is dark and gory. Luke, ultra-horny-evil 12-year-old plans on using “fear” to turn on his 17-year-old “babysitter” Ashley. His friend Garrett and he set up a home invasion plot which fails. The movie swiftly takes a turn to darkness as Luke and Garrett strap Ashley to a chair. When her boyfriend shows up, Luke kills him. You know how that paint canister scene was funny in Home Alone? Well, apparently that move clearly cracks your skull open. When her ex-boyfriend shows up, Luke kills him after taking an apology note which is later used as a suicide note. Luke kills Garrett for kissing Ashley and almost kills Ashley by stabbing her in the neck. He sets up the scene in the house to look like a multi-boyfriend situation gone wrong. He goes back into his room before his parents arrive, pops in his prescription sleeping pills and sleeps off. In the end, we see that Ashley has survived by sticking duct tape to her neck and leaves in an ambulance while giving Luke the finger. Everyone else is left baffled as to what transpired.

You might want to retract that finger Ashley because when it comes to your word versus a 12-year-old’s, guess who the jury will side with. Besides, in a mid-credit scene, Luke tells his mom that he’s concerned about Ashley and wants to pay her a visit in the hospital. The kid is evil.