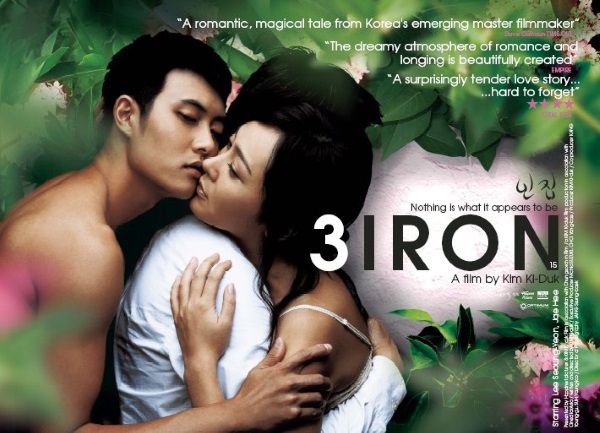 3-Iron (Bin-jip) is a Korean romantic drama. The film has crazy moments, and needs to be watched with a forgiving heart. It is otherwise entertaining. Here’s the film 3-Iron explained.

The story is centered on a lonesome guy Tae-suk who identifies homes where its residents are off on a holiday. He puts fake fliers at all the doors in a block and comes back a little while later to see which of the fliers are still around. He then breaks into one of the houses. Here’s where it gets weird. He doesn’t break into homes to loot it. He simply stays there for the night, perhaps consuming some of the food. He even takes the effort to mend some of the broken things in the houses. Yeah, he’s crazy like that.

One of the houses that he chooses to break into turns out to be not empty. The house belongs to an abusive guy and his wife Sun-hwa. While the guy has not been around, his wife is still in the house. She possibly hasn’t left the home after her last abuse. Tae-suk happily does his routine of living in the house ignorant of the fact that Sun-hwa is quietly watching him (mostly in shock and curiosity). Eventually Tae-suk notices he is not alone and just leaves. Here he witnesses Sun-hwa being hit by her husband. Tae-suk beats up the husband and leaves with Sun-hwa. Obviously, the husband goes to the cops.

Things are fine and eventually, they start getting caught by the residents who come back ahead of their schedule. In one such break in, they notice a dead man. Looks like he’s died of some chronic disease and no one knows yet. The old man lived alone. Usually you would want no part of a situation like this. But instead, the two of them give the old man a burial in the backyard. Eventually the family comes looking for him and find these two. Obviously the two are charged for murder and are arrested.

The autopsy eventually shows cancer and nothing is stolen from the house so they are set free. While Sun-hwa leaves with her husband, he bribes the cops to have a go at beating Tae-suk in revenge. Tae-suk ends up attacking the cop and is finally arrested. Till this point, the movie was strange (because of general characters). After this, it gets a little batshit crazy. Read on.

Tae-suk stays in jail and works on his stealth and mime tactics. As the days go by he learns how to hide himself in his cell such that from the outside it looks like he has escaped. At first it is normal stuff like hanging above the door so the cell looks empty. But then his stealth skills improve so much that he is able to stand behind the cop and move so precisely that the cop has no idea he’s behind him. Eventually the cop does notice an extra shadow and locates Tae-suk. Well, this is the exact tactic that you would find in The Road Runner Show.

Finally Tae-suk is released. He goes straight back to Sun-hwa’s house and with his new found stealth skills, he starts living in the house undetected by the husband. So there are 3 people living in that house now but the husband doesn’t know of .. umm .. Tae-suk sleeping with them. Obviously Sun-hwa knows and even says “I love you” to him but the husband thinks that is for him. When is husband is away on his long trips, the two of them party. The three of them live happily ever after. Well this is one point of view.

The other angle to the story is that Tae-suk is weird and stays in jail doing his monkey business. But his stealth skills never really get so amazing. He just gets caught all the time and eventually is released. This is how the movie shows it too. Tae-suk doesn’t break out of prison. Once he’s out he continues doing this house break-ins and goes on with his life.

Sun-hwa is an abused wife and is not strong enough to stand up to her husband. While she doesn’t get to meet Tae-suk again, she imagines him with her in the house. She finds comfort and peace having him in her thoughts. Everything she tells her imaginary Tae-suk, the husband misunderstands as things being told to him (like the “I love you”). This perhaps has made him less abusive and Sun-hwa has found her own peace in this new life of hers with her husband and her imaginary Tae-suk. This is just contemplation, there is nothing in the film that really proves this theory. It is just another way to look at that ending.

Oh by the way, the films poster also inspired the poster of the Hindi film – Aashiq Banaya Aapne. However, these two movies have nothing in common when it comes to the story-line. 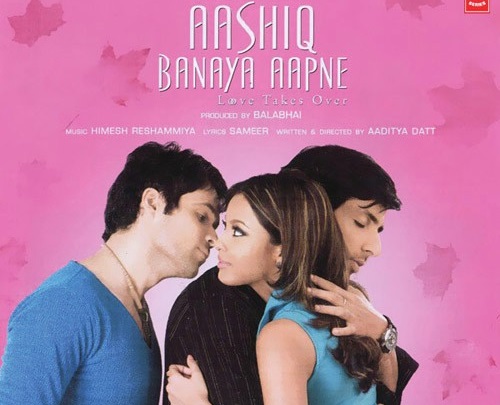