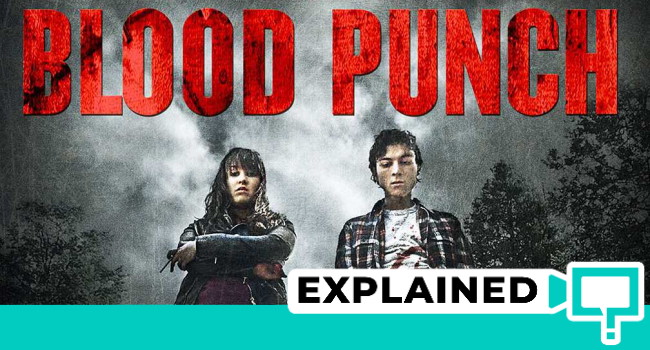 Hi, this is Barry and welcome to my site. The 2014 Blood Punch is an incredible psychological thriller that follows a trio who head to an isolated villa to cook large volumes of Meth. As in all situations with such giant quantities, there is bound to be greed and disagreement, and things tend to not end well. What’s unique about the film is that this situation is spiked with bizarre supernatural circumstances. I can’t say more, do watch this movie if you haven’t already. Here’s the plot and ending of the movie Blood Punch explained.

Significance of the Chacatoy Land and the Meaning of the Blood Punch Curse?

The location the characters are cooking Meth is sacred Chacatoy land. Any who come to this holy land and spill the blood of their fellow man will be cursed to remain within the circle of blood and violence. Chacatoy legend tells us that long ago in a time before time when the sun and the moon were young, a great battle was fought here day and night. The valley filled to the brim with blood. As many men were killed as there are stars in the sky. And when it was over, there was only one warrior left.

The reality is that the great battle was not fought between an army. It was amongst a small group of people who were trapped in a time-loop endlessly killing one another until only one remained. This group was trapped in the loop because they killed one of their own, and finally, the last man standing walked away with no enemies and no friends.

The point of the curse is that if someone in a group kills a fellow-person, the remaining people are cursed in a way they either die or survive with the guilt of everyone else’s murder.

What do Skyler and Russell want from Milton?

Skyler and Russell want Milton to cook Meth for them. They have identified that Milton, who is currently part of the rehab centre, once used to be exceptional at cooking Meth. Skyler seduces Milton and gets him to leave with her and Russell to an isolated place in the woods.

Why are Milton, Skyler and Russell trapped in a time-loop?

This is not shown in the film, but after Milton prepares the Meth, Russell kills him, thereby spilling the blood of their fellow man. This traps the three of them in the time-loop. For many cycles, they keep killing Milton in desperation to break out of the loop. Skyler realizes that Russell is too dumb and is not a likely partner that she can work her way out of the time-loops. So she sides with Milton and kills Russell. The movie shows the loops at this point onward, where Skyler has emptied Russell’s gun, and she eventually shoots him with a crossbow.

Why are there so many dead bodies? Why don’t the bodies reset?

So here’s the thing about the time-loops in this film. Each time the day ends the loop resets everything back to how it was. As long as a person lives to the end of the day, they would heal entirely and retain their memories. But if the person dies, then a new clone begins to loop, and all memories associated with the previous loops are gone. The dead bodies accumulate over the many time-loops. This explains why Milton sees so many deceased versions of himself. This also explains why Russell can’t remember the previous loops because all of his prior loop’s memories die with him when he’s shot by the crossbow. After that, each day he is killed off, which stops him from retaining any new memories. Skyler is the only one who has never died, so she knows all the details right from the first loop.

Trying to sell the Meth and nearly dying!

Milton and Skyler try to get rid of the Meth, get the money and fly away outside the Chacatoy Land. But this ends badly as they find themselves caught in a shoot-out and almost die. That scene where the car’s recording device shows Milton to be lying down, but we see him get up and head to a cave to see the trio meditating is only happening inside Milton’s mind. This is a visual representation of Milton realizing that only one can exit the loop.

What does Milton do with the car-recording device?

In the next loop, Milton and Skyler are happy that they both survived the previous night after the shoot-out and are now fully healed in this new loop. When Milton goes out to the car, he notices the video device has been recording all along through every loop right from the beginning. It doesn’t reset. Milton uses this device to record all the details of the previous loops and states that if he doesn’t remember himself recording, it is because Skyler has probably killed him during the last loop. Milton leaves this device in the bathroom for himself to find in a future cycle.

How long have they been looping?

From the hours shown in the recording device, we see that it has been going on for about 44,279 hours. That’s a little over 5 years! The three of them have been living and killing for 5 years. This detail is essential because, over this time, Milton has fallen in love with Skyler, but she seems to be only looking out for herself.

How does Milton trick Skyler?

After making the video recording, in the next loop, Milton tells Skyler that the only way they can exit the endless looping is when one of them is left alive. Skyler proposes that they could both just live on endlessly. Milton doesn’t believe her. He goes out to kill Russell as usual. But Milton doesn’t shoot him. He only knocks Russell unconscious and fires a shot in the air. Skyler hears the gunshot and gets ready to take out Milton. Now, before they began their looping, Russell tossed one bullet which gets stuck in a decorative piece. Skyler retrieves this bullet and kills Milton. She takes the Meth and sells it. Thanks to the previous shoot out, she goes prepared with grenades to escape safely. But since Russell is not dead, the loop resets, and Skyler finds herself back at the house.

Because Milton died, this “new clone” of Milton remembers nothing from prior loops. When he wakes up, he sees the recording. (It is this recording that we are shown at the beginning of the movie). The video message from himself gets him up to speed with the matters. Remember, Russell has one-day worth memory as he didn’t die in the previous loop. Milton fires an arrow at Skyler, and Russell knocks Milton out.

Now that Milton, Russell and Skyler are all aware of the time-loops, Russell proposes rounds of Russian Roulette to decide who gets to walk away free and wealthy. Unfortunately, he gets a loaded chamber and blows his brains out right at the start. While Milton gets to the gun, he doesn’t want to live anymore. Milton has grown to love Skyler but doesn’t trust her, and feels that the world outside has nothing for him. He shoots himself dead. As the actor Milo Cawthorne mentions in this interview, “I think by the end of the film he’s completely aware of what he wants and makes the ultimate sacrifice for his own needs, instead of other people’s“.

What does the Blood Punch ending mean?

Skyler breaks out of the time-loop sitting by the dead bodies of both Milton and Russell. Riley and Nabiki, the Meth dealers, find her. They decide they are going to take all the Meth and kill her. Remember, Skyler has already broken out of her loop. She knows all the details about the curse and how to break it. When she is killed, it will trigger the start of a brand new curse and a brand new time-loop. Riley and Nabiki will be clueless as to why they are looping. After killing Skyler a couple of times, they will realize they can’t escape. They are bound to eventually check with Skyler if she knows anything about these cycles. At that point, Skyler will have the upper hand and will ultimately be able to kill Riley and Nabiki and exit the curse. She may even get her hands on the money and walk away, although alone and with a heavy heart.