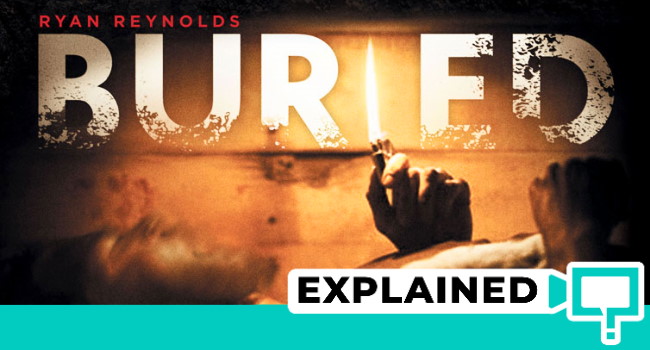 Buried is the tragic story of Paul Conroy (played by Deadpool fame Ryan Reynolds) who wakes up to find himself in a coffin buried under the ground. The entire movie is from the perspective of that coffin with Paul. If you have issues with claustrophobia, I would suggest you take copious breaks to your balcony during the length of this film. The movie is directed by Rodrigo Cortés who also brought us Red Lights. The plot that follows is the struggle Paul goes through to try and free himself, to live. How does he do this? Well, the guys who put him there do want something out of it so they have given Paul a little bit of wiggle space to work something out. The film does have its share of plot holes but does make for a one time watch.

This is a simple story, I’m going to lay it down linearly.

Who is Paul, why him?

Paul is a truck driver, not a soldier, not special ops, just an ordinary truck driver sent to Iraq on driving duty. He’s married and has a son. His wife is not happy with him taking up this assignment in Iraq. But they are short on money so he takes it up anyway. When in Iraq, their group of workers get attacked. Many of them get killed and a few get taken hostage.

Paul is one of the hostages who is put in a coffin and buried. Inside the coffin, he’s left with a bunch of things. A lighter, a phone, some glow sticks, alcohol and a note.

The other hostage is Pamela. Here’s a quick detail you need to know about Paul’s relationship with her. It is suggested that there is a slight romantic/sexual nature to the relationship between Paul and Pamela. We’ll get to that later.

Paul notes that the mobile phone has signal and tries to call for help. He tries his company, his family, 911 and finally FBI. Paul also has one local number in his call history and dials it. His captor picks up the phone and demands that he is paid 5 million by 9 PM. His captor is a desperate local who doesn’t care to distinguish between soldiers and truck drivers. All he knows is that US people are in his soil and have made life miserable for him. He later claims that his family was taken away from him. He tells Paul to arrange for the cash and tells him else he will die buried.

Paul’s calls lead him to talk with Dan Brenner. He seems to be a person responsible for hostage situations and is working out of Iraq. Paul gets a lot of promises from various people stating that they are doing their best to rescue him. But he is also told that there will be no negotiations with the terrorists.

They are unable to trace Paul’s phone. His captor gets him to make a phone video stating the demand for money. Paul initially refuses to make that video. Soon Paul receives a video with Pamela getting shot dead. Looks like there has also been a demand for ransom money for her life. Since the US government has refused to meet the the demand, she is killed and that video is now being circulated. The video is also sent to Paul to scare him into making his video. It works, Paul makes the video asking for ransom money and sends it to his captor. This video soon goes viral.

This is the exact kind of thing that the hostage negotiation team does not want. The more the information spreads, the harder it gets to contain the situation. Unknowing to Paul, the video adds some pressure on the US government to rescue him. After a silly sequence with a rattle snake and fire, Paul gets back on the phone with Dan. Paul’s losing all hope. Dan tells Paul about a Mark White who was rescued from a similar situation of being buried alive. A pointer here – this is a lie Dan is telling Paul just to give him hope. Mark White was never found.

Paul receives a call from his company’s legal department. His company is shown to be a scumbag firm. Here’s what they do. Alan Davenport (legal team) is the guy talking to Paul. The company has figured a way to wiggle out of the hostage situation and insurance pay outs. Knowing well that Paul is buried alive in a coffin, Alan records Paul’s statement agreeing to the fact that he and has had a romantic/sexual with Pamela. This according to the company is prohibited and that before he was abducted, he was fired from work for the same reason. Since he was fired before the hostage situation, Paul’s family will not be entitled to any benefits coming out of Paul’s death. The company simply protects themselves from any liabilities that Paul’s death is going to bring about. Paul doesn’t fully deny the claims of the romantic relationship which could mean Pamela and he were more than “just friends”. They don’t go further into that.

After this, there is an explosion. F-16s have been sent to bomb the area. His coffin breaks and sand begins to pour in. US military is firing in the area knowing well that there are hostages there. Paul’s captor is most likely dead and he begins to lose all hope of survival, given there is no means of tracking him now.

Suddenly his captor calls and demands for a video of Paul cutting off his finger. Else, Paul is told that his family in the US will be killed. Paul, in his desperation, makes a video of him cutting his finger. What is the purpose of this video? Remember, Paul captor is desperate and angry. He’s not getting what he wants from the US government. Instead, he was bombed. He’s just plain angry and wants to post more videos of the pain he is inflicting on the hostages.

Right after this, Paul has a small hallucination. He imagines that he has been located and they are digging him out. This is a quick flash in his semi-conscious state. In reality, he’s still stuck, buried and is soon going to die of suffocation. Paul is able to talk to his wife and he tells her to stay strong that they are going to find him. He apologizes for taking up the Iraq assignment. Dan tells Paul that they have been able to locate a local who is bringing them to his location. Dan has confidence in his voice. He tells Paul that they will be at his location in under 3 min. You can hear Dan’s voice on the phone instructing people to dig faster. Paul is confused because he’s not able to hear anyone digging above his burial site.

Dan is digging the wrong site. You see, Dan had earlier lied about Mark White, the boy who was buried alive in a similar fashion. Dan lies saying that Mark was saved. In reality, they were never able to locate Mark … until now. The local has mistakenly lead them to the site where Mark was once buried. When they finish digging, Dan is heartbroken to find Mark’s body. Dan tells this to Paul – that they’ve been brought to Mark White. Paul realizes that it’s all over. Dan apologizes to Paul for not being able to rescue him. Paul’s coffin fills with sand, he suffocates and dies.

What was the point of that? The story tells us that many such hostages never end up getting rescued. That the ground team tries it’s best but is not enough. Buried is the tragic tale of one such hostage in his last hours.