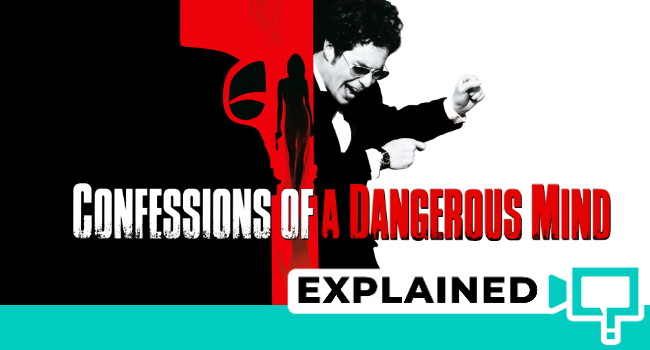 This was another one of those retrospective movie catch up. Confessions Of A Dangerous Mind stars Sam Rockwell (from Moon) playing Chuck Barris who was a popular game show creator and host. Barris is known to give the world its first set of reality shows like The Gong Show, The Dating Game, etc. The events in the movie are based on the real life incidents and claimed real life incidents of Barris’ life. Why claimed you ask? Well, apparently, he claims he was in the CIA assassinating people on the side. The CIA however has denied any such involvement.

The movie, as most real life stories are, is slow and moves from one phase of Barris’ life to another. If you have never followed the real Barris, it becomes difficult to say how the movie is going to end. Or when it is going to end. Some of these movies very randomly send their credits rolling when you are still expecting more movie. This particular movie, however, doesn’t do that. It gets to a slow and steady finish.

The film stars George Clooney (from Batman Returns) as the CIA agent Jim Byrd, who’s also directed the film. Drew Barrymore (from Poison Ivy) plays Penny, the love interest of Barris. A young and pretty Maggie Gyllenhaal (from Dark Kight) has a short appearance as Debbie who is the roommate of Penny and prior date of Barris. There is Julia Roberts as Patricia, another CIA agent.

The film takes you through all the ups and downs in the life of Barris, all his hook-ups, his attempted hook-ups and eventual steady relationship with Debbie. It takes you through his career as a game show creator and eventually a host. The third element of the story is about his stint with the CIA where he’s assassinating people on one side while ideating on game show programs. There are no real surprise elements in the film, a mostly linear timeline form of storytelling. The problem with movies like this is that you tend to watch it while fiddling with your phone and end up missing some key dialogues and then go back and rewatch them. It takes longer to finish the film. If you hit the stop button for whatever reason in-between, then you can never finish the film, ever. I didn’t do any of that. I got through to the end. But would I watch it again if it plays on TV? Nah. It’s okay for a one time watch.

Spoilers ahead. There are three story tracks that happen in parallel…

Barris is multi dating women but doesn’t get to any steady relationship. He happens to hit it off with Debbie but then quickly shifts to Penny. Penny and Barris stay as friends with benefits for a long long time. He initially doesn’t want to marry her. She does though. Later on he realizes she is the one and hooks up with her in the end.

Barris moves to Manhattan to make it big in show business. Initially he has some success in creating a music track. Soon he comes up with the Dating game – the game where a woman is hidden from the men she’s asking questions, based on the answers she gets, she picks a guy and they go on a date. This game works for a while and then is taken off air but they bring it back on later. Then he creates the Newlywed game – a game where newlyweds are asked embarrassing questions. Finally he creates The Gong Show – a show where people come to compete and display their talents and the judges are free to strike a gong to cut off terrible performances (This game was adapted in the 90’s in India too, they should go back to this format even today). The show sees great success and he even hosts the shows at the end.

Track 3 (the portions of his life which could have been just his imagination):

After the Dating game is removed from air, he meets Byrd who enrols him into the CIA and trains him. Barris is sent on missions to kill people. As part of one of the missions he meets Patricia. He’s then caught by KGB and kept a prisoner for a while. He’s released eventually and comes back to create the Gong Show. Byrd indicates to Barris that there is a mole in the organization and that he should watch his back. CIA agents were being killed. Eventually, Barris is tired of all the secret agenting and wants to stop. He says “enough is enough” to Byrd and kills him. Why kill Byrd? That part didn’t make any sense. Perhaps that’s why none of Track 3 actually happened for real. He then locks himself up in a hotel room for weeks. Post this, he cleans up and meets Patricia. He somehow suspects her to be the mole. She offers him a cup of poisoned coffee. He switches the items on the plate to make it look like she’s kept it the other way around. Patricia ends up doing a switch and drinks the poison herself and dies. This was perhaps the best bit in the movie. Barris stops being a CIA agent and gets married.