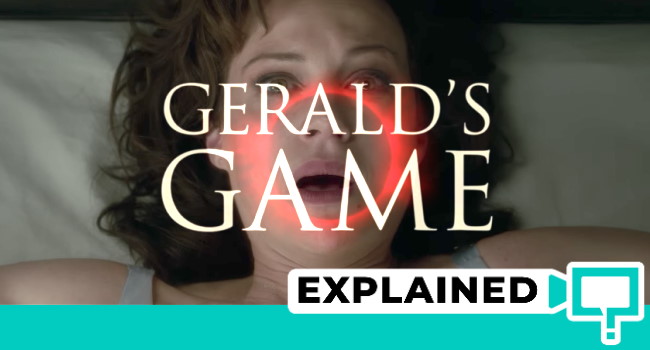 Gerald’s Game is a film directed by Mike Flanagan (also the director of Oculus). It’s based on Stephen King’s book by the same name. Gerald’s Game’s cast includes Carla Gugino, Bruce Greenwood, and Carel Struycken. The plot is centered on Gerald and his wife, Jessie, who plan a weekend in a remote lake house to spice up their sex lives. Gerald firstly gets a refusal for his handcuff idea, and secondly, gets a heart attack and dies, leaving a cuffed Jessie to figure her way out. The film is an interesting take on a sole-survivor and her struggles to make it out alive. Do give it a watch if you haven’t before reading further. Along with other plot-points, here’s Gerald’s Game ending explained. Spoilers ahead!

To watch Gerald’s Game full film go – here. For the book, click below:

No. While it might appear that Jessie’s throwing Gerald off the bed caused his skull to crack and bleed, it is not the reason for his death. As mentioned at the end of Gerald’s Game, the death was due to the heart attack.

The remainder of the movie shows Jessie having conversations with herself which are presented in the form of Gerald and another Jessie. The other element of the film is about Jessie’s childhood and the relationship with her father.

Gerald’s Game: Was the dog real?

Yes, and it’s also mentioned in the original book. The dog is real and is actually in the room with Jessie the whole time. She’s not imagining him. Also, the dog does feed on part of Gerald’s flesh. In the book, however, there is an additional mention of the fact that the abandoned dog is shot by cops in the end.

Gerald’s Game: The Eclipse Scene fully creeps you out!

When Jessie is young and watching an eclipse, her dad asks her to sit on his lap because that arouses him. After that, he proceeds to touch himself fully aware that Jessie knows what he’s doing. He doesn’t stop there, he emotionally manipulates her to keep it a secret from everyone. This one moment scars Jessie forever, and it’s a secret that stays with her for life. Years later, she marries a person much older than her because it’s the only dynamic she’s ever known. Also, Gerald is a lawyer like her father. So not only does she keep it a secret, the agony continues for her because of the way she’s made a choice for her life partner. As a result, she is in an unhappy marriage as a trophy wife.

Based on the most pressing question that I’ve received from people about Gerald’s Game, it seems the element that has gripped people’s heart is the Moonlight Man and the actor who has played it. He was pretty scary, wasn’t he? So let’s first talk about Raymond Andrew Joubert.

In the context of the movie Gerald’s Game, the Moonlight Man represents the “monster under the bed” for Jessie. She’s been tied to the bed and is fading. She believes she’s going to die. We all know that the night is always scarier than the day – naturally because the unknown, unseen elements are more significant. When Jessie first sees the Moonlight Man, she believes he’s just a figment of her imagination, her fear of death. But that is really not the case as told later on in the film.

Is the moonlight man real?

While the concept of the Moonlight Man is inside Jessie’s head, the person she sees by the side of her bed is Raymond. Believing that this was a ghostly apparition, thanks to the way Raymond looked physically, Jessie thinks that it is “Death” who’s come to claim her life. This apparition is what she refers to as the Moonlight Man. 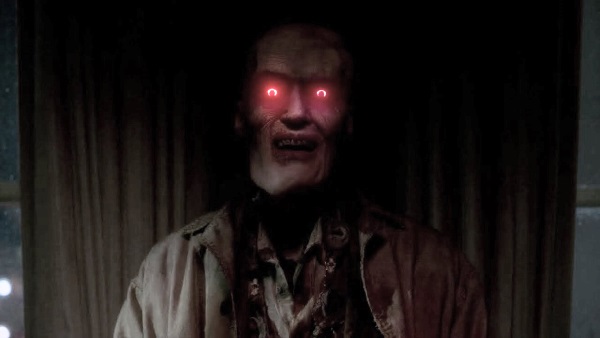 But Raymond Andrew Joubert is real.

He is a crypt creeper who vandalizes graveyards by breaking into mausoleums and stealing jewelry. The news reported that he gouged out eyes and other body parts of corpses. Raymond also has Necrophilia, which means he has sex with dead bodies, but specifically male in his case. Over time he moves on to killing people and chopping off their body parts. Some he eats, some he keeps. Raymond was actually in the house by the side of Jessie but didn’t attack or kill her, perhaps because of Gerald’s dead body which draws his attention. This also explains why there is a large blood footprint by the side of the dog.

Acromegaly is the name of the disease which Raymond Andrew Joubert suffers from – a progressive enlargement of the hands, feet, and face that happens when the pituitary gland goes into warp drive. It causes the forehead to bulge and abnormally long arms that dangle almost to the knees.

Who is Raymond Andrew Joubert real life then you ask?

Carel Struycken is the actor who plays Raymond. He’s a chilled-out dude who most definitely is not a necrophiliac, however, does suffer from acromegaly. He’s 7 feet tall and has an enlarged forehead and has longish arms. He’s done many movies over the years and the most famous roles being Lurch from the Adam’s Family movies. 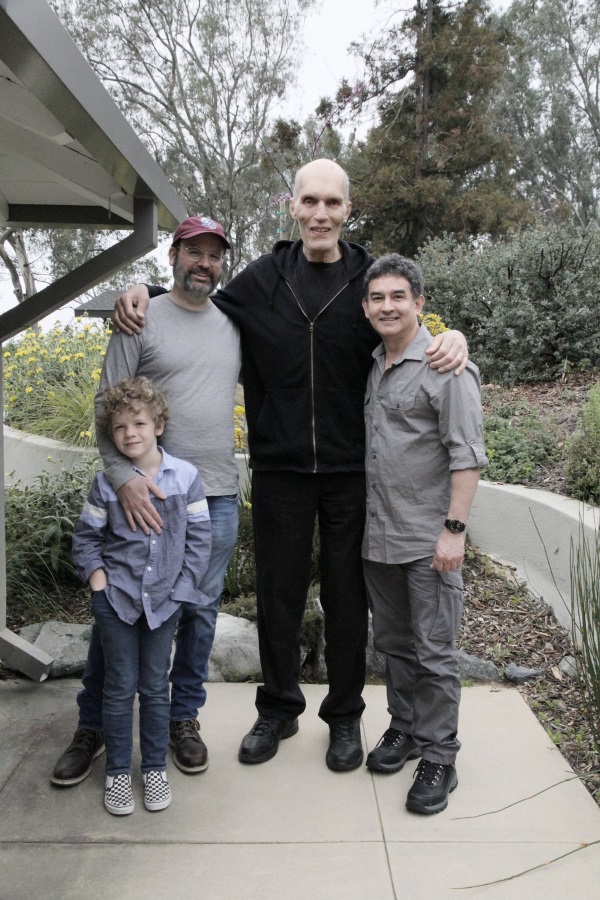 Jessie is able to use pockets of her memories, to eventually cut her hands and slip it out of the handcuffs in an excruciating manner. Jessie doesn’t accept her death lying down in denial. As she is about to leave, Jessie sees Raymond again. Believing that she looking at the apparition, she tells him “You’re not real. You’re only made of moonlight” and hands him her wedding ring as a token to let her pass into the land of the living. But in reality, it’s Raymond getting another piece of jewelry for his collection.

She manages to drive away in the car, but her fatigue makes her lose consciousness and crashes into a tree. A nearby couple rescues her.

Months later she writes a letter to her younger self as a lady who has finally been able to break away from her past. To avoid too many questions from the press, she lies saying she had amnesia and couldn’t recollect anything. But because the cops never recover her wedding ring, she begins to think that the Moonlight Man was real. She’s haunted by his presence every night. Her version of the Moonlight man has red glowing eyes (much like the eclipse). She makes peace with the fact that even though her marriage was not a happy one, Gerald was a good man and not a monster like her father. With the insurance money, Jessie starts a foundation to help young boys and girls like her.

Eventually, one day, she sees a picture of Raymond Andrew Joubert in the newspaper, as a man who’s been arrested for vandalizing graves. She finally gets an explanation for her missing ring, that the person by the side of her bed that night in the lake house was no Moonlight man, but it was Raymond who happened to spare her. She also understands why Gerald’s body was missing its nose and ears. She decides that she’s going for Raymond’s arraignment.

The ending of Gerald’s Game has Jessie realizing that facing off with her monster is the ultimate thing she needs to do to be free of her past. This is she facing her fears. When she sees Raymond, he looks back at her and says “You’re not real. You’re only made of moonlight”. This confirms that it was indeed him in the lake house and that she didn’t see an apparition. That death is not coming to claim his runaway bride. Over time, she has magnified her fears inside her mind – her father, her broken marriage, her Moonlight Man. As she walks up to Raymond, she faces all of her fears and says “You’re so much smaller than I remember”. Jessie acknowledges that she had been allowing her fears to manifest into something that was far larger than what she could handle. But saying this she’s taking back control. We are shown a younger Jessie walking away as the eclipse clears and this metaphorically states that her days are going to be brighter going forward.