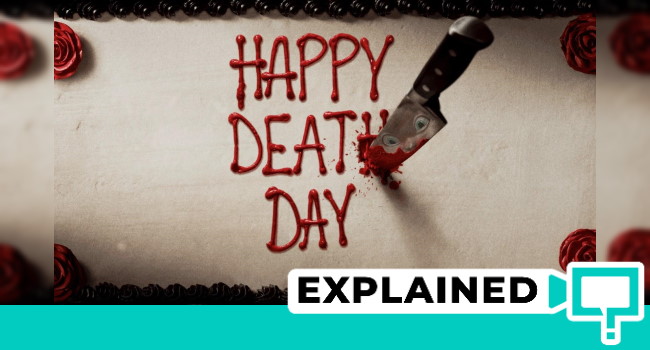 Happy Death Day is basically Scream meets Groundhog Day. The film is directed by Christopher B. Landon and stars Jessica Rothe in the lead role of a person who relives the day of her death in loops. She needs to find out who her killer is to break free. If you liked films like Edge Of Tomorrow, Source Code or Triangle, you’ll like this pleasant brutal comedy. Here’s the film Happy Death Day explained, spoilers ahead.

You can rent or buy Happy Death Day by clicking below:

Theresa or Tree (Jessica) is a b*tch. Ever since the passing of her mother, she’s become an a-hole, even to her dad. That’s how she’s been dealing with her situation. Lori is her roommate. Tree keeps sleeping with Gregory, who is Lori’s guy. Actually, he’s not, he’s a married prof. Lori is a medical student and is also, crazy. She decides the best way to sort out matters with Tree is by killing her. Unfortunately for Lori, Tree’s day loops back to the start every time she tries killing her. Of course, we, the audience, are told that Lori is the one only at the end of the film.

After a wicked night of partying, Tree wakes up in a random dude’s (Carter) dorm room. It’s her birthday. She doesn’t celebrate it anymore because she and her mom shared birth-dates, and her mom’s no more. She gets back to her room. Lori has baked a cake and poisoned it. Let’s go through Tree’s loops…

<other loops we are not shown>