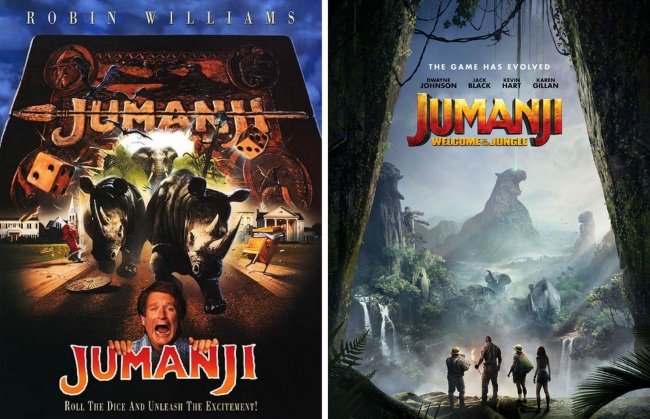 Here’s a quick introduction to the World of Jumanji and its characters. The first Jumanji was made in 1995 starting the phenomenal Robin Williams. What we’ll do now is quickly go through the events of the first film, the alternate timeline it creates, and how that leads on to the 2017 Jumanji (starring The Rock, Jack Black, Kevin Hart, and Karen Gillan). At the end of the article, there is also a small section on a giant plot-hole that the 2017 movie creates. Here’s a plot summary of both films to show how the Jumanji films are connected.

Jumanji is a magical board game that brings to life all of the punishments that players face as they play. Once you start the game, you must complete it to revert the world back to its normalcy. We don’t know how old the game is, or its origins, but we are shown a scene in 1869 where two brothers are trying to get rid of the game by burying it inside a chest. Fast forward to 1969, Alan Parrish, a 12-year-old, finds the game and begins playing it with his friend, Sarah.

Unfortunately, Alan ends up getting a punishment to be kept a prisoner inside the game’s jungle. Sarah freaks out seeing Alan disappear and runs away. Fast forward again to 1995 where Sarah lives a life suffering from a post-traumatic stress disorder after watching Alan vanish, who is still stuck in the game. Alan’s parents have died a couple of years back, and the house has new residents; two kids: Judy and Peter. The two of them find Jumanji and resume playing, and in the process, release Alan who is now a grown man (Robin Williams). The thing about being in this jungle is that you don’t realize the time passing by. Alan comes out believing he’s still a kid and soon realizes it has been 26 years. The three of them locate Sarah and get her to continue to play. Through the game, a world of chaos is released as part of the various punishments. They are finally able to finish the game, and everything reverts back, back to the beginning when Alan and Sarah are kids in 1995. However, they two of them still retain their memories of the entire 26 years of existence. Jumanji remembers too.

Now, a new timeline is born where Alan never gets trapped in the game. Instead, Alan and Sarah throw Jumanji into the river. 26 years pass. Alan and Sarah are married and expecting a baby. They happen to meet Judy and Peter who have no knowledge of Alan, Sarah, or Jumanji because they have never played it in this timeline. The movie ends with the Jumanji washed up on a beach. Though this is the last scene of the film, we’ll need to assume that this event happens in the year 1996, about a year after they throw it into the river.

Jumanji: Welcome To The Jungle

This film continues in the year 1996 from that beach scene where a man finds the Jumanji game which he takes home to his teenage son, Alex. Alex is uninterested in boardgames and shelves it, and hence, overnight, Jumanji transforms into a video game cartridge. Alex hooks up his console and begins to play the game and ends up getting sucked into it.

Jumanji, the video game, needs to be played by 5 characters; each of whom has an avatar, a set of abilities/weaknesses, and 3 lives. The game is based on a simple storyline of a bad guy who has stolen a mystic jewel from Mount Jaguar’s Eye and has cursed the Land of Jumanji. The objective is to return the gem to The Eye and call upon Jumanji to lift the curse.

Alex ends up choosing the avatar of Seaplane, a pilot, and he’s not able to move forward beyond a particular point in the game because he’s a solo player. After losing two of his lives, he decides to take shelter in a jungle house. This jungle is the same place Alan, from the first movie, spends his 26 years and that jungle house was built by him; Jumanji remembers. However, Alan’s only mission as part of the boardgame was to wait in the jungle for someone to bail him out. However, Alex has a mission and yet ends up sitting it out as he doesn’t want to lose his last life too. While he thinks it has been months, years go past in the real world.

20 years after the mysterious disappearance of Alex, we are introduced to four characters who happen to find the game and play: Spencer, Bethany, Fridge, and Martha. They enter the game as Dr. Bravestone, Professor Sheldon, Zoologist Mouse and Ruby Roundhouse respectively. The objective of the game remains the same, they are given the jewel that they need to return to the Jaguar’s Eye. They meet Seaplane and realize that he is the missing Alex. They also tell him that he’s been gone not for months but for 20 years. The five of them team up and finish the game and exit one at a time.

Based on the first movie, what we would expect is that Alex exits in 1996, stashes the game away, and lives his life. This would be the birth of a new timeline, one where he’s not trapped in Jumanji. Eventually, when he meets Spencer, Bethany, Fridge, and Martha 20 years later, they wouldn’t remember him because they’ve never played Jumanji in this timeline. But that’s not what happens, we have an inexplicably skewed timeline here where the four of them and Alex meet and remember having played the game together. Alex is 20 years older. This is fine, and besides, these four have only met Seaplane (Alex’s avatar), they don’t know how he looked in real life.

Let’s go back to the time right after Alex has exited the game. It’s 1996. He needs to now keep that game somewhere which leads to it getting to the detention room where the four of them find it 20 years later. Even if they did find it, they can’t have met Alex (as Seaplane) inside the game because Alex is out in the real world making babies. I believe the film-makers didn’t want to end it the same way the first Jumanji did, so they tried to change it up but just made it plot-holey.