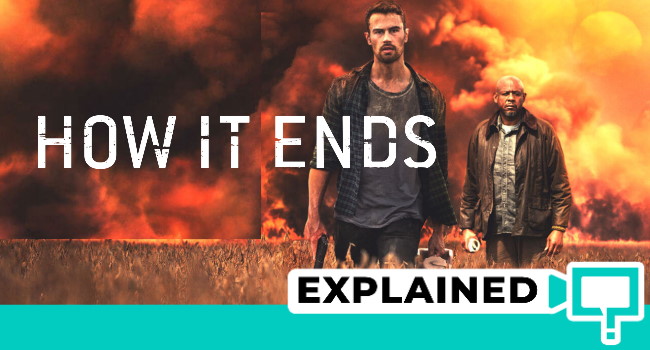 How It Ends tells the story of Will who leaves his pregnant girlfriend (Sam) in Seattle and travels to Chicago to meet her father (Tom) and ask for her hand. While Tom is still annoyed with Will for sinking his boat many years back, and for being poor in general, an end-of-the-world event happens in Seattle – an earthquake combined with a volcanic eruption. There is power loss all the way till Chicago. The majority of the movie shows Tom and Will take a road trip where they bond over being robbed, being in an accident, being mugged, being in an accident, being helped by a woman who eventually leaves them, being rude, being lost, being funny, and being dead. Well, Tom dies from his rib injury. Will makes it to Seattle, to whatever is left of it, climbs to this house and follows a note that Sam has put on the door for him. Will unites with Sam only to annoy the disgruntled neighbour who has saved Sam and was hoping Will would be dead so he could enjoy the end-of-the-world with Sam. The neighbour explains that he is a Software guy who has seen many war games simulation with the exact scenario of explosions and power cuts, that this is a war on America. As any caring neighbour would do, he tries to take Will to the woods and kill him but dies by a bullet from Will’s gun. Another earthquake and volcanic eruption ensue, and Will gets Sam and drives away. They speed away from the hot volcanic fumes and just make it out of harm’s way. The film ends without telling us if the volcanic fumes catch up or they die of hunger or a landslide or somehow survive. Apparently, the filmmakers went with the thought-flow that these catastrophic events will leave you without answers, hence the ending of the film leaves you dangling too.