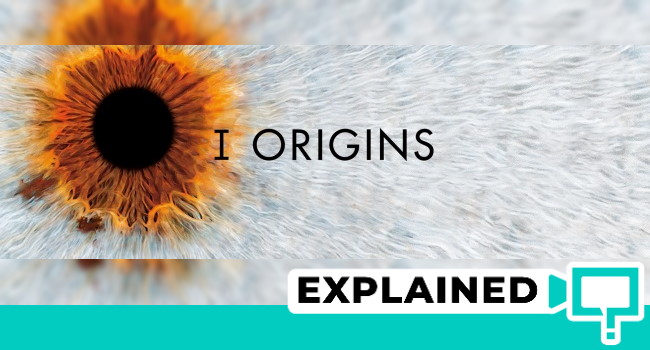 I Origins is one of those films that lets science and the meta-physical world go head to head. The movie stars Michael Pitt (from Murder by Numbers) in the lead role (Ian) of a scientist who is out to get proof for the evolution of Eyes. He is joined in the lab by his scientific partner Karen (played by Brit Marling from Another Earth). Together they are looking to locate species which don’t have sight and through a series of experimentation, are looking to provide it – sight. Here’s the film I Origins explained.

What is special about eyes?

Many religious texts, across the world, rely on the fact that the eyes are so intricate and have no evidence of evolution and therefore calls for a greater power, a maker. The eye in its complexity is known to be the window to our souls. Now this is what the movie is focussing on, the eyes and the significance. You could possibly ask why not fingerprints and their significance. Have you ever heard of the phrase – “Fingerprints are the window to the soul”? No? Well then that’s why. Ian is looking to bust this popular spiritual belief that eyes were made directly by the greater maker – God.

The nerd that Ian is, is looking to take pictures of random people’s eyes. In once such encounter he meets Sofi, a gorgeous girl who is strangely attracted to this lab geek. Let’s just assume that this is the reel-world and therefore this situation is totally possible and move forward. Spoilers ahead.

Ian loses this Sofi and miraculously meets her back in a train and falls in love with her. They plan to get married and try to register. Just as they are waiting for the registration time period of 24 days, Sofi gets severed in half. Yes, in half. Ian and Sofi get stuck in an elevator and as they try to get out, Ian makes it out fully and only half of Sofi does and that results in her, well death.

Sofi is a believer of the spirit world and Ian isn’t. Ian is a man of science and believes in data. Ian and Karen are close to proving that eyes too are a result of evolution. Karen has found a species of worm that has no vision and they plan on giving it vision.

Sofi’s Explanation of the Spiritual World

Her explanation is the worm that Ian has located can’t see. It doesn’t understand light. So it doesn’t believe in light as it has no proof that light exists. Through a set of chemical reaction, Ian is going to mutate the worm to having a basic vision. This way the worm is going to suddenly feel a sense that it never had. The sense of sight. Sofi’s explanation is that humans too may not have a sense for the spiritual world because we are limited to our 5 senses. Her argument is quite sound. Just like the worm can’t see and hence not understand sight. Humans can’t feel the sprits and hence can’t understand the world beyond life. Ian can’t make sense of that so instead he decides to make out with Sofi and gets chemicals into his eyes. Moral – don’t make out in a chemistry lab.

Karen, reaches out to the mourning Ian and gets him back to the lab and get back to the work they are doing. Karen has been able to give a blind worm vision. Ian and Karen celebrate the moment by making out. Ian loves Sofi and is even turned on by her old videos but feels he may have never been with her for too long. Ian and Sofi’s views never went along. Ian eventually gets married to Karen and 7 years go by.

By now they have concrete evidence that eyes too are part of an evolutionary cycle that starts from 0 and goes to a fully mature 12. Those are the steps of evolution.

What is the going on with Ian and Karen’s baby and Paul Edgar Dairy?

Karen and Ian have a baby. The hospital does an iris scan, which is a new mechanism of uniquely identifying a person – based on his/her iris. This is what is currently used in many airports today (I would assume). When they scan their baby, the system throws up a name – Paul Edgar Dairy. The nurse simply brushes it aside as a system error and re-starts the system and puts their baby’s name as a new entry.

Later Ian gets a call from a Dr.Simmons saying that his baby may be showing early signs of autism. Point to note here is Dr.Simmons is lying about the autism here. Dr. Simmons is running her own experiment to understand the relationship between eyes and an afterlife. Yes, this is where the meta-physical is wrestling with science. When Ian’s baby is subject to a series of images, the baby is shown to react/respond to people and things related to Paul Edgar. Who is Paul Edgar? Well he is the person who earlier had the same retinal/iris composition of Ian and Karen’s baby. The theory that Dr.Simmons is running with there is that – if the iris of two people match, then then the second person is likely to be the first person “reborn”. Now why a doctor is researching something like is this beyond me and is not explained in the film either.

The baby is shown to react more positively to people and things connected to Paul Edgar. Ian traces the Dairy back to a Paul Edgar who had died before the birth of Ian’s baby. Ian has enough proof that Dr.Simmons was not checking for autism and can therefore be sued in the court of law. Ian and Karen ignore that fact and get back to their own research instead. 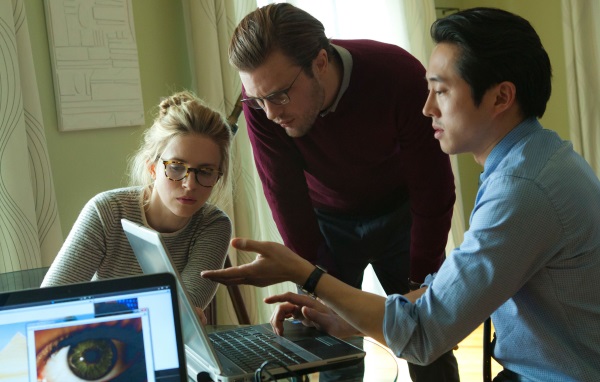 Ending Explained: What is Sofi and the Indian girl’s connection?

Ian goes. He reaches India and with the help of a local contact Priya (Archie Panjabi from Bend It Like Beckham). Unable to find the girl Ian puts up a bill board ad. He eventually locates the girl (her name is Salomina). Karen and Ian run a test on the girl using images to see if her choices match Sofi’s. This test is to see if there is some sort of a genetic memory transfer (at a subliminal level) from Sofi to Salomina. It matches only at about 40%, which is not a great match as such. On his way out, he is about to enter an elevator with Salomina. Salomina freaks out and hugs Ian pleading not take her in there. There are no more dialogues after this.

Back to the last scene, Ian is overwhelmed by the fact that Salomina has an inexplicable fear of elevators, the thing that severed Sofi in half. His silence and his carrying away Salomina could possibly indicate that Ian is accepting this as a spiritual event that trumps his scientific belief. Ian now accepts that Salomina is a reincarnation of Sofi.