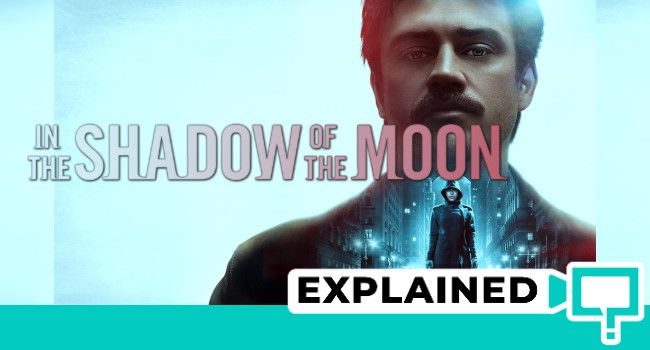 In The Shadow Of The Moon is a 2019 Sci-Fi Thriller directed by Jim Mickle and was released on Netflix. The story is centered on a cop on the hunt for a serial killer who resurfaces mysteriously every decade. The cast includes Boyd Holbrook (from Logan), Cleopatra Coleman, and Michael C. Hall (the original serial killer of serial killers), to name a few. If you’ve watched and understood Predestination, this film should be a breeze. Here is the plot and ending of the film In The Shadow of the Moon explained, spoilers ahead. You can watch the film here.

While usually a plot gets simplified by walking through it linearly, in this film, it would be much better if we walked through it backward. The reason is apparent, the mystical character progresses through time in reverse. 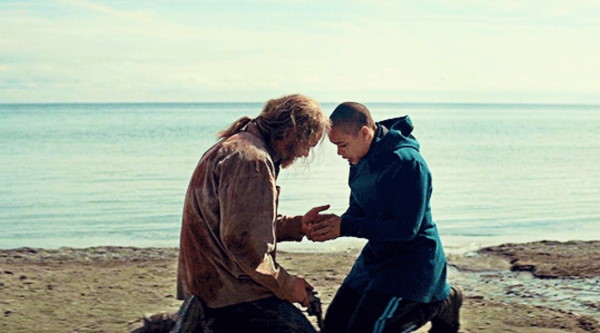 In the Shadow of the Moon: Ending Explained

The mysterious woman, Rya, is Thomas’s granddaughter from the year 2042. She’s from an alternate timeline where a hate-triggered civil war devastated the country. The first attack happened in the year 2024 and escalated from there. Rya travels back in time in intervals of 9 years to kill the key people responsible – first to 2015, then 2006, then 1997, and finally 1988, where she dies accidentally at the hands of Thomas. The result is a new timeline free from war and death. She’s basically the angelic Terminator to the evil John Connors.

How does Rya kill people?

Rya injects the victim with an unstable isotope invented by Dr. Naveen Rao. This chemical can be triggered remotely from the future, from 2042. Rya attacks people at various points in time, but their deaths are triggered by Naveen all at once from 2042, and the world would always remember them as deaths separated by 9 years.

Time Travel: What is the significance of the 9-year interval?

A blood moon is an event of total lunar eclipse where the moon appears blood-red in color. This kind of eclipse occurs once every 9 years. The nature of time travel in this film is such that Rya can jump back from one blood moon to the previous and so on. The movie theorizes a major scientific significance to the blood-moon and some mumbo-jumbo about its gravitational forces reacting with electromagnetic pockets on Earth.

In short – the blood moon powers time travel backward by 9 years, and hence the movie’s name.

In The Shadow Of The Moon: Who is Dr. Naveen Rao?

Dr. Naveen is a scientist studying the blood moon. After years of research, he harnesses this phenomenon to power time travel. He, too, is affected by the Civil War in the timeline Rye is from. He devises the time pod for Rye and also invents the unstable isotope death technic.

In The Shadow Of The Moon: Timeline Diagram

In The Shadow Of The Moon: Plot Synopsis From Thomas’ Perspective

Thomas Lockhart, a police officer, comes across mysterious deaths of three random people whose brains bled out through their noses and mouths. Thomas, his partner, Maddox, and his brother-in-law, Holt, track down the suspect, a young black woman. They try to corner her in a subway station, and Maddox has his ass handed to him. Thomas stabs the woman with her device, and she gets killed by a train. Later a bullet is recovered from her hand and keys to a plane from her pocket. The case goes cold. Meanwhile, Thomas’ wife dies during delivery while giving birth to their daughter, Amy.

Thomas, Maddox, and Holt find themselves chasing down a similar suspect from 9 years ago. Another set of victims have bled their brains out. Dr. Naveen tries to have a word with Thomas about time travel but is unsuccessful in getting the policeman’s attention. Following the key from 1988, Thomas finds himself at an airfield. On confronting the killer there, Maddox gets shot dead. The killer escapes in a plane with Thomas as a hostage. She goes incognito after dumping him at a lakeshore.

Thomas is a worn-out private investigator who has dedicated his life in search of the mysterious woman killer. His daughter is being raised by Holt. Thomas believes that the killer is a time traveler, and Dr. Naveen is somehow connected. Investigating an unreported victim from 1988, Thomas goes to meet the dead man’s wife. The lady gives information about her dead husband being a white nationalist. She mentions that her husband’s ex-wife was also a white nationalist. Thomas steals Holt’s badge and locates the ex’s house only to find her dead. The killer makes a run for it, and Thomas pursues and shoots at her. The bullet hits her hand, but she makes it into the sewers where her pod is ready. She enters and disappears in a poof of science as Thomas watches on.

Thomas has become a complete recluse. All he’s been doing is waiting and preparing for 9 years so that he can catch the killer. He knows that by stopping her from making any further jumps back in time, he can get his life back. Dr. Naveen locates and kidnaps Thomas and tries to explain that this killer is doing the right thing by erasing something terrible in their timeline. He also mentions that the equipment she’s using is what he’s currently designing. Thomas overpowers Dr. Naveen and heads back to the sewer exit.

The killer appears and announces that she is his granddaughter from the future of an alternate timeline, one that was tormented by war. And that it’s Thomas who prepped her in the future for this kill-mission. Thomas is devastated as he realizes he killed his own grandchild in 1988.

Amy gives birth to Thomas’ granddaughter, who he cradles in his arms. Knowing that he can never get his time back with Amy, he devotes his remaining life to his grandkid and lives happily in the newly created timeline where peace would prevail.

In The Shadow Of The Moon: Plot Synopsis From Rya’s Perspective

Rya was born in 2015 and was raised by her loving grandfather, Thomas. In 2024, a man blew up a truck full of homemade explosives. Powered by anger and fear, a war spread across the country and devastated it over the years. Eventually, in 2042, she teams with Dr. Naveen and takes up a mission to travel back in time and kill a specific set of people who were vital to instigating the war.

Rya encounters Thomas waiting to kill her. She tells him that he is her grandfather. She leaves to kill a bunch of people and jumps back by 9 years.

Rya murders more people. Just as she executes the white nationalist woman, she’s chased down by Thomas, who shoots her in the arm. She manages to enter her pod in time and travels back 9 years.

Rya continues to take out more people and gets to an airbase to steal a plane but is tracked down by Thomas and Maddox. Maddox sneaks up on Rya, and she puts a bullet in his head. She escapes holding Thomas hostage. She drops him at the lakefront and enters her pod and leaps back another 9 years.

Rya completes her last set of kills and his trying to get out of town. She knows that time travel for her is a unidirectional trip. There is no going back. Besides, Thomas told her that he killed her in 1988. Thomas and Maddox track her down at a subway. She takes down Maddox, but Thomas strikes her with her own weapon. She falls on to the tracks of an oncoming train and, well … Fatality!

That wraps it up for In The Shadow Of The Moon. How did you feel about the film? Comment with your thoughts below.