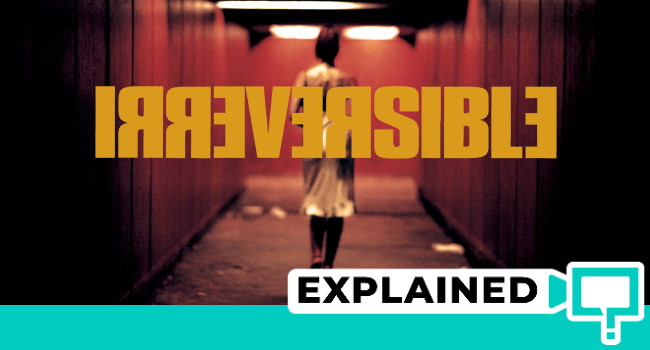 This article is about the French film directed by Gaspar Noé which stars Monica Bellucci, Vincent Cassel, Albert Dupontel and Jo Prestia in the lead roles. The movie runs backwards reminiscent of Nolan’s Memento. But other than that there is nothing similar between these two directors. Here’s the explanation of Irreversible in chronological order of events, spoilers ahead.

I think it makes sense to walk through the plot in the chronological order of events. After that, we can get to why the film was in reverse order.

Alex lives a happy life with Marcus. She enjoys spending time going to the park to read. This is the very last scene of the movie. We’ll get back to this segment again in the end.

Marcus too lives a happy life with Alex but indulges in alcohol and drugs and also, other women. Alex knows about this and is not pleased as she is looking for something more serious.

One morning, Alex dreams of a red tunnel that breaks into two pieces. This is an omen of bad things to come. No, she is no psychic, it could just be a coincidence. Alex is reading a book which also talks about how the future is already set, and the proof of this is prophetic dreams. Well, it’s what she believes in too, and for her luck, she has a vision that could possibly talk about her own disastrous future. Even Marcus mentions he can’t feel his arm (as it goes numb) but eventually he has his arm broken. Alex asks Marcus what if she was pregnant and Marcus replies that it might be a good thing. They get ready for a party that they plan to go to in the evening. Marcus leaves to get some wine and Alex takes a shower. After that, she takes that pregnancy test and realizes that it is positive. Alex smiles with joy and doesn’t tell anyone yet.

In the evening, they meet Pierre, and the three take the metro to the party. On the way, they have an elaborate conversation about how Pierre couldn’t satisfy Alex sexually in the past, and that might have been the reason for Marcus to have stolen Alex. She doesn’t want to talk about it, all she mentions is that Pierre is too intellectual about sex and is never participating during the moment. This sequence is to let us know about the past relationship between the three. This part also shows how Alex is dragged into a conversation unwillingly by the two people she’s supposed to feel safe with. 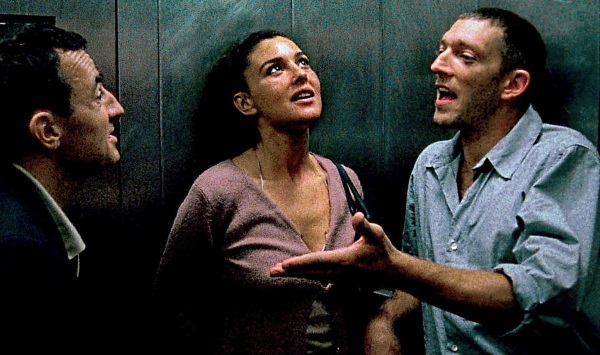 At the party, Marcus is high on drugs and so are other women. He begins to make out with them, but Pierre stops them saying they would all regret it when they sobered up. He stops Marcus from cheating on Alex. Pierre asks Marcus to be with Alex. Marcus is pretty high and is clowning around and flirting with other girls in front of Alex. He also mentions how he’s annoyed with Pierre for being a party-pooper. Alex tries to get Pierre to relax and dances with him. Pierre still regrets not being with her, he still loves her. She goes upstairs to meet other friends. Marcus shows up. Alex gets annoyed that he’s gotten stoned. As she leaves, Pierre meets her and offers to take her back home. She says she’ll be fine and exits on her own. So we have a guy, Pierre, who loved (and loves) Alex but was unable to make love to her because he was too focused on giving her pleasure. Then we have Marcus, who Alex is now with, who is able to sexually satisfies her but is unfaithful.

Alex goes outside and tries to cross the road to get a taxi. A woman asks her to take the underpass instead. She uses the tunnel but runs into Le Tenia (The Tapeworm). Let’s quickly talk about who this guy is. He is a bisexual, gay pimp who indulges in all kinds of sadomasochistic sexual pleasures. He frequents at an underground club called Rectum that has gay men coming to be put through a series of S&M role play. In the tunnel, Le Tenia is beating up Concha, a transsexual prostitute. Soon as he sees Alex, he lets Concha go and grabs Alex. The then holds her at knifepoint and sexually assaults her. All the while we hear him say things like “Who pays for your clothes? Your guy?” “Does that excite you?” “Usually I don’t like that. But this time…”. Le Tenia is punishing Alex for his assumption of what she stands for. A particular class of the society that looks like her, beautiful, well-off, confident. A group he believes looks down on people like him, and treat him like the filth that he is. He doesn’t stop there, Le Tenia then kicks and punches Alex and bludgeons her face to the ground while screaming “You think you can do anything because you’re beautiful, huh?”. He blames her beauty, he accuses her kind, for being the trash he is.

Pierre and Marcus eventually step out of the party. Just as Marcus is blaming Pierre for ruining the party, he sees a bludgeoned Alex being taken away on a stretcher. Marcus breaks down into tears and gets to know that she was assaulted and now she is in a coma.

After the cops take Pierre’s and Marcus’ contacts, two street thugs, Mourad and Layde, offer to help. They say that Marcus looks wealthy, so if he paid them, they would help find the perpetrator as they know the area better than the cops do. They offer revenge, they say they have discovered a handbag with an id of a Guillermo Nunez, and that it is a start. Marcus hesitates for a bit but then agrees.

As they go looking for Guillermo Nunez, we’re shown that Marcus is still very high. They start interrogating all the streetwalkers for Guillermo. They eventually land upon Concha. Well, Concha, who Le Tenia was beating up when Alex walked into the tunnel, is Guillermo Nunez. Marcus begins hitting her to get to the assaulter. She finally tells them that it was Le Tenia and that they could find him at the Rectum, a gay bar. All the while Pierre is trying to stop Marcus from beating Concha and reminding him that Alex is in some hospital while they are on the streets looking for revenge. He wants to quit and go be with Alex. Marcus doesn’t listen, he pushes on. In his high state, he was ready to gouge the eyes of someone innocent just so that he can avenge Alex. The entire transexual streetwalker group comes running to save Concha. Marcus and Pierre run and enter a cab and escape. They get separated from Mourad and Layde.

Marcus tells the cab driver to take them to the Rectum. The cab driver is unaware and wants them to point it out on a map. Marcus is agitated and calls the driver “slit-eyed”. The driver is Asian and takes offense to this. He asks the two to get out of his cab. Marcus instead pulls the driver out, beats him up, pepper sprays his eyes, and drives away in the taxi.

They go around asking for the gay bar. Pierre says he’s had it and wants to drive away. Marcus bashes the windscreen and windows of the taxi and asks Pierre to follow him. 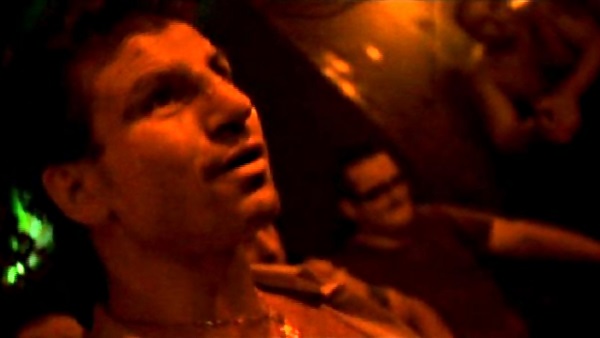 They eventually find the bar. We are shown, in a visually headache-inducing red coloured sequence, the kind of S&M gay activities that happen inside the club. Marcus finally identifies one guy who seems to know Le Tenia. Marcus beats that guy up till he points out who Le Tenia is. There are two guys. Marcus tries to find out which one of them is the perpetrator he’s looking for. Just then one of the two guys walks away. Though this is ‘not’ Le Tenia, Marcus assumes it is him and gets into a fist fight with him. Le Tenia is the other guy who’s just standing and watching. Marcus gets his hand broken and is about to be sexually assaulted, by the other guy. Pierre shows up with a fire extinguisher and bashes the guy’s face in. We are then shown Pierre bashing that face in repeatedly till it looks like baked blood orange that has imploded. Pierre, too, is consumed by revenge. All this while, Le Tenia watches on with a certain joy on his face. He’s admiring all the violence. All that effort and they get the wrong guy.

Marcus is taken away on a stretcher. Pierre is arrested for murder. Mourad and Layde are pissed off that they aren’t getting paid. And if the police question Pierre, they know that they’ll get pulled into this. They shout and curse at Marcus and Pierre.

Just as this commotion is going on, in a nearby place, two guys are talking in a room. One of them is the character Butcher from Gaspar Noé’s earlier film called Seul Contre Tous (I Stand Alone). Butcher explains how he spent time in jail because he had sex with his daughter and how Time Ruins Everything. This is the first scene in the film.

This is something we hear right at the beginning of the movie and see right at the end. The line talks about that you never know how things will turn. That the passage of time eventually brings misery by pain, suffering or death. This is the dart opposite of “each day comes with a possibility of a miracle”.

Why is the movie played to us in reverse?

Well, each of the actions we see in each of the scenes is irreversible. And every step leads to something that can’t be changed. We’re first shown a murder which we evaluate at face-value as something that is terrible. We don’t know at that point that this was an act of revenge. As the film proceeds, we soon understand that it is an act to avenge someone. Then we learn that it was because of Alex who was brutally assaulted. The film starts with an ending where the perpetrator escapes, Marcus and Pierre are taken in. The mid of the movie shows an assault that changes everyone lives. As the film carries forward, we are told the more peaceful, cheerful times. As we see these scenes, we already know the dreadful fate of the trio. Just like in the book that Alex is reading, we already know that their future is set in stone. That it is irreversible. All will be lost. And the final piece that hits us is that Alex was pregnant.

I’m not sure why all the strobe flickering at the end but that scene, too, ends with “Time Ruins Everything”. It does for the trio. The film is a tragedy which ends on a happy note because of its non-linear storytelling. 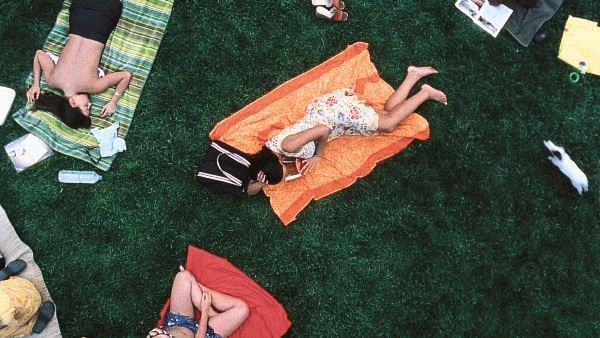 Do drop in your comments on granular points that I may have missed here.