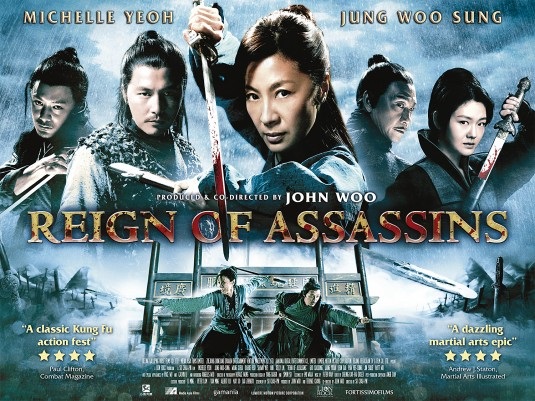 This article is about the Chinese movie Jian yu or Reign of Assassins. This 2010 film was directed by Su Chao-pin and John Woo. The film stars Michelle Yeoh and Jung Woo-sung in the lead roles. It is a period film set in China during the Ming Dynasty. The movie is fast paced and is nonlinear with surprise elements thrown in. The fight choreography is quite majestic with innovative swordplay. Great film, go watch, come back. Here’s the film Reign of Assassins explained, spoilers ahead.

Let’s go through the story in a linear format. Helps makes things clear. First, there was the Indian Buddhist monk – Bodhi. It is believed that his mummified remains have supernatural powers. That one could master kung fu and rule the martial arts universe. The remains are in two halves. One of the halves is in possession with Prime Minister Zhang and his son Renfeng. A group of assassins called the Dark Stone gang, want the remains.

The gang consists of the following

They raid the minister’s residence and kill the minister. Drizzle flees with the remains. I think she has a moment of clarity on how evil the Dead Stone are. On the way out she meets Renfeng who is still alive. She has no choice but to give him a quick painless death. She stabs him in his heart. An important thing to know here is Renfeng has this condition called Situs Inversus, which means his heart is on the right, not left. He doesn’t die but is just unconscious.

At this moment, Drizzle encounters a person by the name Wisdom. As one would expect, he’s quite wise. Drizzle, having the need to lay low, goes into hiding at Wisdom’s bachelor pad. She also falls in love with him. She is pursued by many to attain the remains and fights them off. Wisdom doesn’t agree with Drizzle’s murderous ways and declares he is going to turn into a Monk and pray for her. Drizzle, after having spent three months with Wisdom, is quite pissed to hear this. She threatens to kill everyone at Wisdom’s temple and they break into a fight. Wisdom demonstrates how there are 4 weaknesses in her technique. After this he allows Drizzle to kill him. Drizzle gives up her assassin ways, hides the remains of Bodhi, and gets her face changed. She changes her name to Zeng Jing (Michelle Yeoh). Zeng Jing lives her life as a cloth merchant.

Renfeng gains consciousness. He changes his face and identity. He dawns a new name Jiang Ah-sheng. He wants to avenge his father’s death. He follows Drizzle closely. He knows of her changed identity and face. He’s living his life as a courier guy. While the movie shows Jiang Ah-sheng and Zeng Jing fall in love and get married, this is actually a carefully planned move that Renfeng is making on Drizzle. We, as viewers, don’t know this yet. He wants to get to the Dark Stone Assassins and kill all of them. He starts off by killing Fatty Chen, one of the members. While we only see Fatty Chen dead, we’re not shown who’s done it.

Meanwhile, Wheel King recruits a new assassin. Her name is Turquoise Leaf. She’s shown to have murdered her husband and in-laws because he was impotent. She’s thrown in jail and is sentenced to be executed. Wheel King uses tortoise powder to fake her death and gets her out.

Wheel King is living his life under the cover of a messenger.

Wheel King is back

On a day when Jiang and Zeng are at the bank, a group of robbers attack. To protect Jiang Ah-sheng, Zeng Jing is forced to display her martial arts skills. Jiang doesn’t seem to care (we know why though), he says that the past shall remain the past. The Dark Stone gang gets word of this attack and based on the fighting styles Wheel King identifies that Zeng Jing is actually Drizzle. They give her a visit. Zeng Jing agrees to give them the remains of Bodhi and help them find the other half too. In return, she wants to be left alone to live peacefully with her husband.

The Black Stone gang finds the other half of the remains. It is with the Kongdong Sect. Turquoise can’t get over the fact that Zeng Jing (Drizzle) has decided to get married to a good for nothing messenger. Turquoise attempts to seduce Jiang but he simply calls out to the neighbours saying there is a mad lady in the house. Turquoise flees.

Now when it comes to taking the remains, the Magician wants to drop Wheel King. He wants the remains for himself. He asks for the other Dark Stone folks to join him and defeat the Wheel King. The Magician begins to fight with Wheel King. Turquoise and Lei Bin fights Zeng Jing. Wheel King kills the Magician. After that, he uses the 4 flaws to defeat Zeng Jing. She makes a run for it. She reaches home, tells Jiang to leave the city and faints. She’s lost a lot of blood.

Turquoise and Lei Bin come to the house to finish the job. Jiang reveals that he is actually Renfeng. The three begin to fight. Lei Bin is fatally wounded, he goes back home and dies. Turquoise escapes.

Jiang meets Wheel King and challenges him to a duel at night at the Yunhe Temple. He also discloses that he’s the one who killed Fatty Chen. Wheel King understands who Jiang really is.

Growing it back with Bodhi

Turquoise tries wheedling her way to get all the Kung Fu training from Wheel King. But in the process, she realizes that he’s a Eunuch. Wheel King believes that Bodhi’s remains will help grow back his organ. Turquoise mocks him and tries to leave. Wheel King decides to kill her by burying her alive.

Meanwhile, Jiang confronts Zeng Jing and tells her everything. But he does seem to love her and is unable to bring himself to kill her. He asks her to leave. Wheel King heads to the temple to confront Jiang. But he sees that Jiang is lying dead. Obviously, Jiang is not dead. Zeng Jing has used tortoises powder on him to make him appear dead. She wants him to witness herself avenge his family by giving her life if she needs to. Zeng Jing and Wheel King begin fighting. Zeng Jing uses her learnings from her earlier fight with Wisdom and kills Wheel King. She collapses too. When Jiang awakens, he approaches Zeng Jing expecting her to be dead. But she’s still alive. Jiang forgives Zeng Jing for her past evilness and carries her away. Zeng Jing says “After we get home, draw up the divorce papers”. Jiang replies “Don’t be silly. We have years ahead of us”.