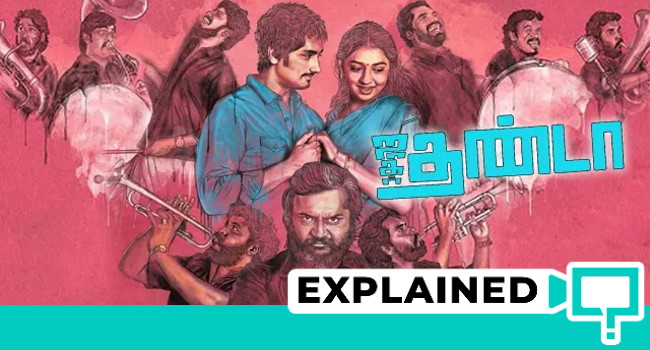 Ha ha ha. Jigarthanda is a fun movie. Director Karthik Subbaraj (of Pizza fame) has also written the script for this himself. There aren’t too many dark humour films around in the Tamil film industry. This one carves itself a great spot in the list of tight and well executed flicks. There is no unnecessary drama around love and loathing, no overacting and is not an hour longer than it should have been (like many films today are). It’s simple and makes sure you are kept laughing throughout. Here’s the Tamil film Jigarthanda explained.

The movie starts off with a guy in a bar being shot, we’ll come to this in the end. The story is about an upcoming film director Karthik (Siddharth from Boys) who’s struggling with his short films. At a reality show he’s dissed by a veteran movie maker (Nassar from Jeans) and simultaneously supported by another producer Sundar (Naren). Hoping for a break Karthik takes his script to Sundar the following day. Sundar explains how the script has too many factors around the way of society and such films might have to take too much flack. He suggests Karthik should return with a plot for a film based on a rowdy (gangster, if you’re not from the south of India) coming up to power in the underworld.

Karthik has a quick heart to heart with his uncle, who is a journalist, and decides to go to Madurai to follow a real life rowdy – Assault Sethu. Assault in Tamil doesn’t mean to attack. It means to be casual about something. Sethu executes his badassery very casually. Casually killing his foes, casually rounding up the journalist who writes about him, tying him up and burning him alive, etc. Karthik lands up at his friends place Oorani, almost against Oorani’s will – nothing that a bottle of Jack Daniels can’t fix. Karthik finds more about Sethu’s past and his current underground business.

Kayal (Lakshmi Menon, who was still in school while shooting for this film) is a chick whose mom is Sethu’s cook. She shows attraction for Karthik. Karthik figures he can get info out of her regarding Sethu. That doesn’t go too well, she only falls more for Karthik and he doesn’t get any info out of her regarding Sethu. Post a hilarious bathroom shoot out sequence, a cop informs Sethu that there is talks about him higher up, there could be a chance of him being encounter killed by cops. The right hand men exchange notes and begin to suspect Oorani and Karthik.

Sounder, an upcoming thug in the Sethu gang, is sent to keep an eye on Oorani and Karthik. The three of them end up hanging out. They bug Sounder’s phone once they realize there is something going down with the Sethu group at night. Sethu’s gang plans on taking out their opposition leader Sekar. Sounder is revealed to be Sekar’s man playing undercover in Sethu’s group. Sethu’s men are waiting outside and have taken air out of Sekar’s car so there is no getting away. Sounder calls Sekar to warn him about the take down and Sekar escapes in an ambulance. Sounder arrives with Sethu and gang and tries to act all upset that Sekar has escaped. Little does Sounder know that this is all a set up. Sethu had always suspected Sounder to be a snitch. This was their elaborate scheme to trap Sounder. Sethu kills Sounder. Sekar is caught and brought back and killed too. Oorani and Karthik hear all this through the bugged microphone. Sethu’s gang locates the microphone and subsequently the two of them. 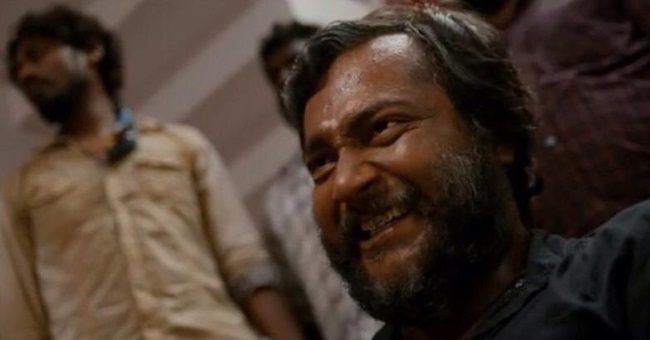 On beating the crap out of Karthik and Oorani they reveal that they aren’t cops. Karthik announces that he is a director and was aiming to make a film on Sethu. Sethu is impressed by the general idea and embraces them and begins helping them out with details of his life. In this time Karthik has totally ignored Kayal and she confronts him. Karthik admits that he was using her and apologizes. She leaves angrily. Just as Karthik prepares to head back to Chennai, Sethu calls him for one last party. Kayal is at the party and in her anger suggests that Sethu himself should act in this film. She does this to put Karthik in trouble and into trouble he gets. Sethu now wants to be the hero of this film. Karthik tried to make a run for it but get caught in a jiffy. Sethu even nabs Sundar, the producer, and gets them to commit to the film.

Given that Sethu and the gang are terrible actors, they are obviously unable to deliver dialogues. Karthik brings in Muthu to coach them with their acting skills. These sequence of events are quite hilarious. Muthu decides that the rest of the gang sucks but Sethu can act enough to commence filming. The shooting apparently heads nowhere. Kayal meets Karthik to let him know that she still loves him and that she’s sorry for what has happened. Karthik gets back at her by telling Sethu that Kayal has feelings for him. Sethu decides to finish the film and get married to Kayal.

Eventually the wrap up the filming. There is a bit of back and forth happening in the storyline here. Let me lay it down sequentially. What Karthik has planned to do with all the footage is to create a comic film. Obviously no one knows this, not even the audience. Karthik dubs over alternate dialogues on Sethu’s voice and uses all the shots from Sethu’s crying training to create an alternate story. Not knowing this, Sethu and gang are busy promoting the film with their thugness and force people into buying tickets. They force all theatres to run just this film. Karthik gives Sundar a preliminary viewing and Sundar is very impressed (this is shown later). The film is shown to be released under the name of A Kumar. Sethu assumes that A stands for Assault.

Kayal and Karthik meet and Karthik says he will not be able to go up against Sethu and win her, but wants to and they part. When the film A Kumar releases, it is revealed that the A stands for Azhuguni (crybaby) and not Assault. The film opens as an incredibly funny film which basically shows Sethu to be a pathetic crybaby that achieves everything in life by crying. Obviously, Sethu is furious because he started his thug life because he was once laughed at during a drama where he played draupadi and now everyone in Tamil Nadu is laughing at him. He wants Karthik’s head on a skewer. Karthik and the entire production crew run away and disappear in fear of dying by skewering.

As Sethu’s hunt for Karthik continues, he encounters people who come up to him and commend him for his acting. He attends the funeral of a big gang leader and notices that the fear for the gang leader never meant respect. Once a feared man dies, people mostly celebrate his passing away. Sethu runs into Sounder’s wife and kid who are also his apparent fans. Sounder’s wife doesn’t know that it was Sethu who splattered Sounder’s brains all over the floor. Even Sethu’s mother who has not been talking to him because of his evil ways for over 12 years, asks him for water after seeing his film (no idea how it’s on TV already though). Basically people start losing fear for Sethu. While this initially affects him, he realizes that people start developing a sense of respect for him as an actor (not knowing that he sucks at acting). He finally enters a theatre which is showing his movie and witnesses people applauding and loves it.

Karthik, unable to get back with his life, reaches out to his uncle and tells him that all the video footage of Sethu and the gang admitting to their crimes is with him. His uncle tells him that this evidence would be enough to gets the cops to encounter kill Sethu and his merry men. So off Karthik and Oorani go with the evidence (and a gun for safety given by his uncle) to the cops but runs into Sethu and party. They give Karthik the same kerosine treatment. Karthik slowly reaches for his gun. Just as the scene turns out to be a mexican stand-off, Sethu forgives Karthik and spares him. Karthik pulls out the gun and fires shots at the ground to let know that he too spares Sethu. They part ways. Time passes and Sethu’s thugs now pair with Karthik who uses thug force to get people to act in his films, he’s taken up the role of the badass and is now married to Kayal. Sethu is shown to continue his luck with acting and is happily in love with Sounder’s wife and kid. The first scene of the film comes back here, while it appears to be an encounter killing of Sethu, it’s only a scene being shot.