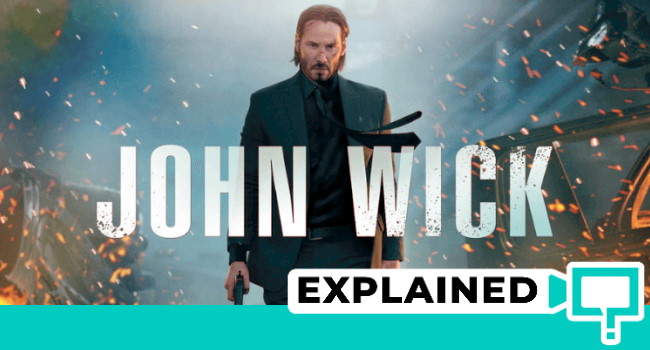 What plot you ask? Correct, I’m just messing around. There is really nothing much to explain. It’s more of a fun walk through. Here’s the film John Wick’s plot-holes explained.

Neo has just lost his wife to cancer and has grown a beard. He’s also called John Wick in this movie (However he holds the same expressions from the Matrix. Also, seems to have forgotten all his Jujitsu knowledge).

His wife leaves him a puppy. An aww-cute-little-puppy-wuppy. She plans this puppy as her replacement in death. So as far as John Wick is concerned this is his dead wife. Wick takes the puppy out for a drive and at a fuel station we meet our first 3 people of interest. The villains. Russian mob with Iosef as their leader. Iosef wants Wick’s car. Wick says no – “not this bitch” in Russian. 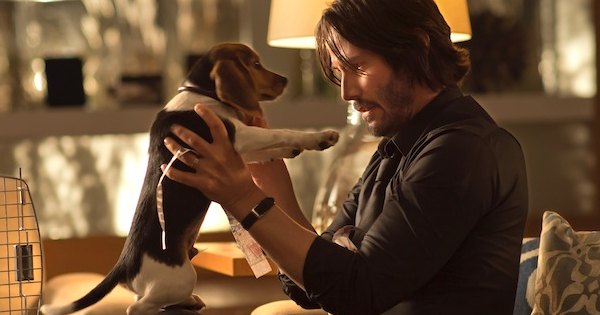 Typically if you are a Russian in America and an American replies to you in Russian, you would check out who the possible American could be. After all, Russian is not the national language of America. Instead what do the 3 Russians do? They land up at Wick’s place at night beat him up, steal his car and … wait for it… kill his puppy. Yep, that’s what they do.

They take the car and try to get it mod-ed by the car modifier – Aureilo. Aureilo beats up Iosef for being an Iosef and doing Iosef like things to Wick. Wick meets with Aureilo to find out who Iosef was. Turns out that Iosef is the idiot son of a Russian mob head – Viggo. Viggo gets to find out from Aureilo about what his smart-ass son has done to Wick.

What we get to know now is that Wick is a big bad-ass called the Boogeyman. He’s basically f*#ked up the opposition all by himself to get Viggo where he is today. However Wick retired from his bad-assery to take care of his dying wife. He’s not been in the scene for 5 years.

Let’s review the situation – Iosef just messed up the puppy of the retired Boogeyman, the puppy which was the replacement of his wife who died of cancer, for . Plot established! Iosef will die a gruesome death at the hands of Wick and so will anyone who comes in Wick’s way.

Viggo calls Wick and tries to change his mind. Doesn’t work. Viggo sends assassins to Wick’s house to take him out. Wick f*#ks them all up. Calls the cleaning service to take out the bodies. Viggo puts $2mil bounty on Wick and gives the job to Marcus, John’s friend and mentor. So you know where Iosef is getting his brains from. 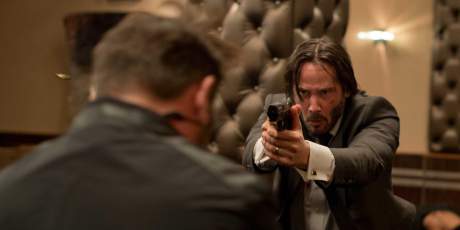 Wick moves out to this cool hotel which is a sweet set up for assassins to stay and perform assassinations outside of the hotel. Viggo now doubles the bounty in desperation. Wick’s chilling out at the exclusive club at the Continental trying to get more info on the location of Iosef. You also see this chick-who-played-wonderwoman at the club winking and saying hi to Wick. Bartender chick is cozying up with Wick. Basically everyone likes/loves Wick. The owner of Continental slyly gives Wick the location of Iosef. He’s at his papa’s club making out with multiple ladies in a pool. Wick lands up there and takes out 2 dozen men but Iosef escapes.

From here on Wick gets his ass handed to him multiple times – by the guard at the club, the chick-who-played-wonderwoman at Continental, guards at the Church and Viggo at a later time. As the law of the villains go – they never kill Wick when they have the chance. Marcus, too, babysits Wick with his awesome sniper rifle. Thanks to the good fortune, great luck, great baby sitting and retardedness of the mob leader and assassins, Wick finds and kills Iosef.

After this, Marcus is killed by Viggo, chick-who-played-wonderwoman is killed by the owner of Continental, more henchmen are killed by Wick. Then the customary fist to fist fight happens between Wick and Viggo. Viggo cheats, of course, by pulling out a knife. The knife finds its way to Wicks abdomen and then to Viggo’s neck. Viggo dies, Wick picks up a new dog and walks off into the sunset.

Ok FINE, there was no plot, I get it. But for the awesome way in which John Wick was introduced, he needn’t have been saved by every character in the movie who was not the villain. The gun fire scenes were nicely done, but people, this is the guy who played Neo! They could have thrown in some better hand to hand combat for Pete’s sake. The movie started at such a high note and died to an average action flick at the end. The movie should have ideally taken the course that Equalizer did.