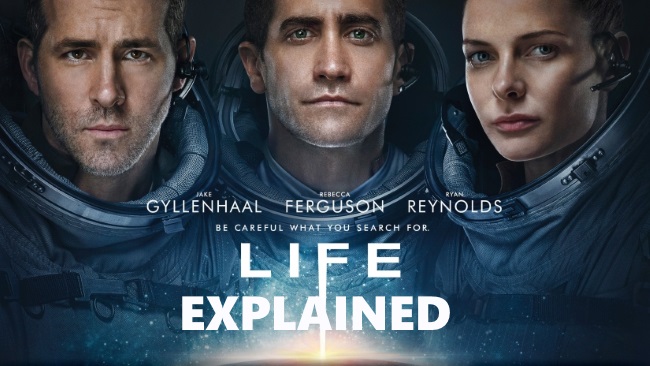 Life is brought to us by director Jorge Daniel Espinosa. The film is about a crew on a space station which is conducting research on Mars’ soil. The movie stars Jake Gyllenhaal, Rebecca Ferguson, Ryan Reynolds, Hiroyuki Sanada, Ariyon Bakare and Olga Dihovichnaya. This is a rare film of Jake’s where you don’t have to put in many hours to understand the movie’s plot. It’s rather straightforward except for a few bits. There was a rumour that the film is a prequel to a movie about Venom (Spiderman). Well, no it’s not. Ryan Reynolds is now Deadpool so his contract wouldn’t allow him to feature in a Venom’s prequel. This is the film Life explained.

What is the crew up to?

Well, they are on a mission to collect and analyze soil from Mars. They suspect that they may have found life.

What happens in the beginning, what are they trying to catch?

One of the pods that contains the soil sample is out loose. So Roy heads out and uses a clamp to catch the pod floating by. This part is not very significant but if they missed catching the pod, there would be no story. Because in the pod, is Martian soil and in the soil is a single cell of Martian origin.

The single cell seems to be dead. But when Hugh changes the atmospheric settings to match ancient Earth, the organism is revived from its dormant state. The organism begins to grow and is now multicellular. Hugh notices that each of the cells, unlike human cells – is all muscle, all brain, and all eye. In humans, different types of cells come together to form eyes, muscles and the brain. For the alien, the cells are kind of supercells. I know I’m trying to justify the explanation in the film. But honestly, I have no idea what the concept of this all brawn and brain thing is. But hey, it’s fiction. America names the alien Calvin. The organism grows rapidly. However, there is an accident in the lab that messes up the atmospheric conditions. Calvin goes dormant. Hugh, the smartass, uses electricity to try and resuscitate Calvin. Calvin gets pissed and breaks the electricity wand and as a bonus, breaks Hugh’s hand too. Hugh faints. Calvin uses the broken wand to rip out of containment unit. Calvin then consumes a friendly neighbourhood lab rat and grows in size.

Roy enters to save Hugh. He gets Hugh out but gets trapped with Calvin. Roy tries to flame-throw Calvin but fire doesn’t seem to affect it. Calvin retaliates by entering Roy’s mouth and ripping him from inside out. Calvin exits Roy and has become even bigger. The still active flame thrower triggers a fire alarm and air vents open up. Calvin escapes from one of the air vents.

The ship loses connectivity to Earth. Sho sends out an SOS call which reaches Earth unknown to the crew. Katerina decides to step out and have a look at the antenna. She realizes that the coolant has been consumed by Calvin as food. This has caused the comm failure as well. Calvin attacks her as she tries to reenter. Her suit is damaged and coolant from her suit enters her head chamber. She realizes that the rest of the crew would be put in danger and hence decides to drown and die outside. But Calvin makes its way to the thrusters to enter.

How is Calvin able to breathe outside the ship? Doesn’t it need oxygen?

Well, Calvin is shown to be desperate, it’s trying to get to the oxygen in Katerina’s suit. After she dies, Calvin is desperate to enter the space station from the Thrusters. Calvin is a lot bigger that it was in the containment unit. Hence it’s able to last a while longer without oxygen. Okay, then how about the pressure? Isn’t it vacuum in space? Alright, fine, this bit makes no sense at all.

So why is Calvin on a killing spree?

It’s primal instinct. It is a carbon-based lifeform, it needs to survive, it needs food. Humans are food. Humans have also pissed it off. So it’s merely reacting to protect itself.

Sho tries to turn on the thrusters as Calvin tries to enter them. He runs low on fuel doing this. Calvin is unharmed. Apart from this, all the thrusting has caused the space station to begin entering Earth’s orbit. They can’t have Calvin entering Earth. So they save the remaining fuel to correct the course out of the Earth’s orbit and Calvin reenters the ship.

What’s up with Hugh and how is Calvin on his leg?

As the crew plans to cut off atmosphere from the rest of the station except their own, Calvin has already made it to their module. Unknown to the crew, Calvin latches on to Hugh’s legs. Hugh can’t feel this because he’s paraplegic. Oh yeah, did I forget to mention that? Hugh can’t feel his legs. He goes into cardiac arrest. Let’s take a minute and see what Hugh is up to here. Hugh has some crazy affinity with Calvin. He sees Calvin approach while the others are taping up the place. He doesn’t say anything. He actually allows Calvin to latch on to his leg. He then goes on to talk about how the nature of life is through destruction. How Calvin doesn’t hate them but has to kill them for its own survival. He then touches his leg and then begins to lose consciousness. Then he says “I’m sorry”. Hugh’s helping Calvin here. He’s lost it and the crew doesn’t realize this. As they use a defibrillator on Hugh, they notice Calvin emerging from the leg. They make a run for it. David and Miranda make it into a module and Sho shuts himself into a sleep capsule. Calvin has eaten a part of Hugh along with his tracker. So now they are able to track Calvin’s location. Hugh dies.

What’s that thing about the firewall?

David and Miranda use Hugh’s dead body to lure it into a module. Remember that SOS call that reached Earth? Well, Miranda had planned earlier that in case the crew loses control of the space station, Earth should just send a spacecraft to push the space station into deep space. So the incoming spacecraft is doing just that.

It locks-on and begins to push. Sho thinks that rescue has arrived and makes his way to the spacecraft and manually opens the latch. Calvin attacks. David and Miranda try to save Sho but they can’t. The manual hatch opening sends the capsule spinning onto the space station damaging it severely. The temperature and oxygen begin to drop rapidly.

David and Miranda are in a module and Calvin in the other. As they prepare to die, they realize all the pushing has caused the space station to drop into Earth’s orbit again. Calvin could survive the reentry, and Earth is doomed. David has one last idea. He recollects two escape pods that are configured to autopilot back to Earth. He tells Miranda to get into one pod and make it to Earth. He decides to lure Calvin with the oxygen glowing thingy things into the other pod. He plans to override the autopilot and fly into deep space with Calvin onboard.

David lures Calvin into his pod and Miranda enters hers. Miranda has a navigation failure and begins to go off course from Earth. It is her pod that begins to float into deep space not David’s. David tries to pilot his pod into deep space but Calvin immobilizes him. David is unable to control the ship and it enters the Earth’s orbit. It lands safely in Vietnam. Two fishermen come to check the pod out. While the audience is made to think that Miranda is the one who enters Earth, we are shown that is actually David’s pod with Calvin. Surprisingly, David is alive and Calvin has spread out like a web over David.

Why has Calvin kept David alive?

Well, it could be because the reentry drastically changed the atmospheric conditions in the pod which may have caused Calvin to go dormant. Alternatively, Calvin plans to use David as bait to get out of the pod. Either way, the film ends with multiple boats coming to the pod to rescue David as he screams for them to not to. They manage to open the Pod. The film ends. Earth is doomed unless there is a sequel.