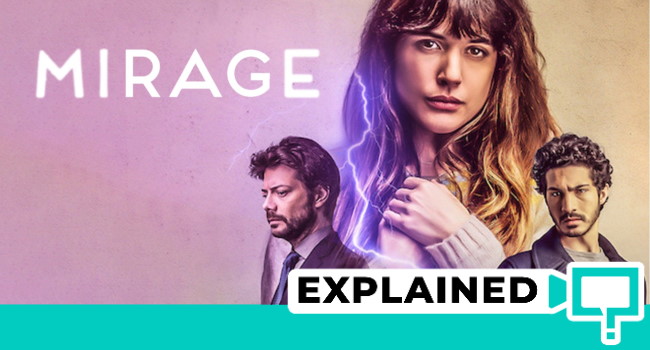 Mirage (on Netflix) or Durante la Tormenta is a 2018 Spanish film written and directed by the incredibly talented Oriol Paulo. The cast includes Adriana Ugarte, Chino Darín, Javier Gutiérrez Álvarez, Álvaro Morte, and Nora Navas. Oriol’s previous movie was Contratiempo (The Invisible Guest), and he started off in feature films as a writer for Los Ojos de Julia (Julia’s Eyes). If you haven’t seen his prior work, you must, he’s terrific. Durante La Tormenta is a Science-Fiction Murder-Mystery film, and beyond that, I really can’t give any further details without handing out spoilers. Here is the plot summary and Durante La Tormenta (Mirage) movie explained, spoilers ahead. You can watch the film here. 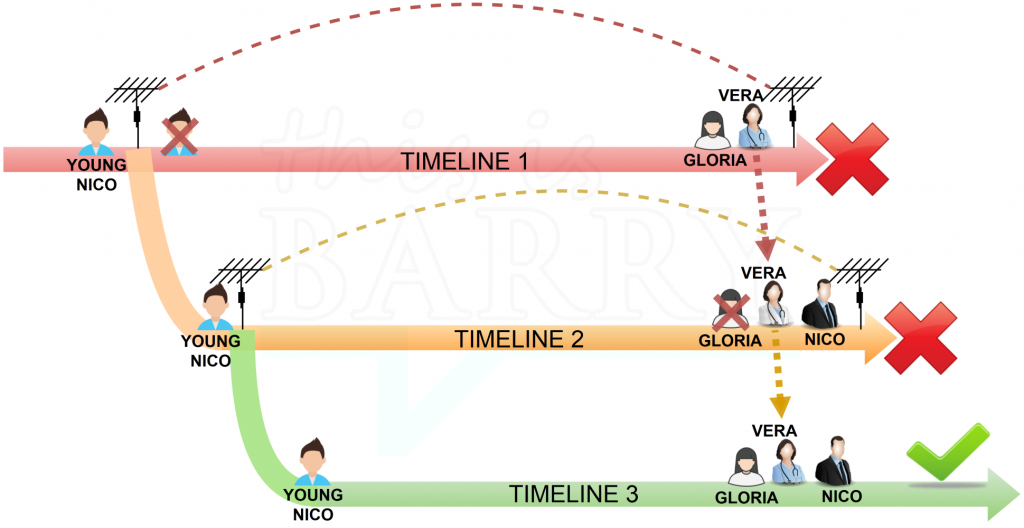 The premise of the film is pretty apparent, the Butterfly Effect, which means if you make one small change to an event in the past, it cascades into a substantial turn of events in the future. Mirage has totally three timelines created because of conversations between a person in the future and the past. The timeline diagram below will give you an overview of the entire movie.

The Murder: Angel, Clara, and Weiss

Clara Medina has been having an affair with Angel Prieto. When Angel’s wife, Weiss, walks in on them, it leads to a hustle, and Clara stabs Weiss by mistake. This information is only revealed in the film towards the end, and we’re misled to believe that Angel is the murderer. Clara’s brother is informed, and he plans to send Clara to Germany (where Weiss is from) and have her operate on Weiss’ bank accounts. While Angel, a butcher by profession, would chop up Weiss, put her in a suitcase, and bury her under his butcher-house. The story to the world would be that Weiss left Angel and went back to her ex-boyfriend in Germany. But this plan is disrupted. 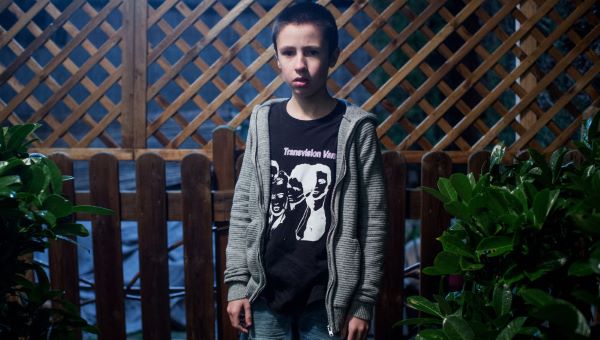 The Mirage movie begins in Timeline 1, in 1989, which follows a young boy by the name Nico. On a stormy night, Nico’s video recording is interrupted by noises from the house across the road. Nico crosses over to go investigate and sees Miss Weiss lying dead. He sees Angel with a bloody knife and makes a run for it and gets killed by a speeding car. Angel is arrested, and he confesses to the murder and states that he was planning to bury his wife under his butcher-house.

Aitor, Clara’s son and a close friend of Nico, grows up with his mother, who has been living with the guilt of murder. Years later, Aitor happens to meet Vera on a train, and one day she loses her balance and falls on Aitor. The two become friends, and eventually, Aitor introduces Vera to his buddy David and the two fall in love and get married. David leaves his girlfriend to be with Vera, and Vera quits her preparation to become a neuro-surgeon when she gives birth to their child, Gloria.

Vera, David, and Gloria move to their new home

Years pass. In 2014 Vera, David, and Gloria move into the house Nico once lived. Another electrical storm identical to 1989 ensues. Vera and David find Nico’s old TV and camera and plug it in to view the recordings. Later at dinner, Aitor states that the kid in the video was his old friend Nico who was killed by a passing car. 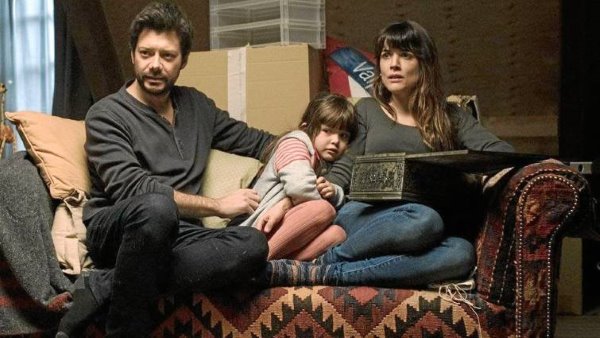 The Television: The Storm: Vera and Nico

In the night, Vera notices that the television is on. The electrical storm has somehow connected the TV from 1989 to 2014. Vera converses with Nico realizing that he is moments from his death. She tries to stop Nico from going outside. Vera delays Nico from crossing over to the neighbour’s place, and the car that would have killed him passes by harmlessly. This communication creates a new timeline.

Once inside the house, Nico hides under a bed and watches Angel chop up and leave with Weiss in a suitcase. He also finds Clara’s watch and takes it with him. Nico informs his mother and then the cops. But he’s a young kid, and along with the murder, he mentions the woman from the future on the TV warning him. The police obviously assume that Nico is making up the story to cover up his breaking in and stealing Angel’s watch. Over time, Nico realizes that the only way he can lead a regular life is if he tells the world that the lady from the TV was a lie. Angel, Clara, and Aitor move in together.

When Nico had talked to Vera over the television, he had noticed a railway station board that Vera claims to have stolen. Over the years, Nico visits the station hoping that one day he will run into Vera again. And finally, one day, he does. Nico enters the train to sit across Vera (instead of Aitor). When Vera loses her balance, she falls on Nico and not Aitor. Nico and Vera fall in love, and two get married. They don’t have a child, so Vera goes on to become a neuro-surgeon. In Timeline 2, Vera doesn’t meet David until he lands up as a patient who she operates on. She shares no other relationship with David, who is married to his girlfriend.

Vera wakes up lost and confused

Eventually, in 2014, the electrical storm reappears, and something bizarre happens. The consciousness of Vera from Timeline 1 gets written on to Vera from Timeline 2 (refer to the diagram). Overnight Vera forgets Neco and instead has memories of David and Gloria. She believes she’s a nurse and not a doctor. When she goes to the school looking for Gloria, none of the teachers recognize her. Nico aids Vera by taking on the case of her missing child. He understands quite well that she’s forgotten her current life because of the storm and the Timeline disruption. 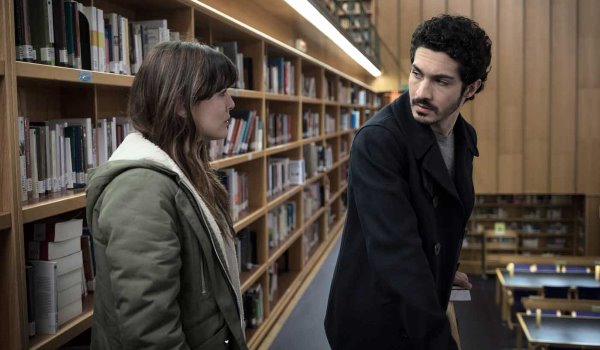 The Suitcase under the butcher-house

Vera reaches out to Aitor, but he doesn’t believe her because they have never met in Timeline 2. Vera notices that Angel is not convicted in Timeline 2, but she remembers his confession from Timeline 1. She tells Nico about the location under the butcher house, and the authorities dig up a suitcase with cut-up human bones. Nico sends Vera to a hotel room where she finds out that David is cheating on his wife with one of the nurses. Nico does this to let Vera know that the man she got married to in Timeline 1 wouldn’t have been true to her. Angel and Clara are taken in for questioning where Nico reveals that he was the kid who once testified against Angel. Once the tests on the bones come back, he will have the proof to lock Angel and Clara away.

Nico meets Vera and explains what has happened in Timeline 2. And that it is just a matter of time when Vera will remember everything and they could go back to their lives as husband and wife. Though Vera doesn’t care for David anymore, she still can’t let go of Gloria’s memories. Vera asks Nico to reach out to his past and create a new pathway where he doesn’t grow up with an obsession for her. After this, she commits suicide by falling off the balcony. Before the storm ends, Nico is forced to set up the TV and talk to himself from 1989.

We aren’t shown what the conversation between the Nicos is, but he gives himself enough instruction so that he never runs into Vera. In this new Timeline 3, Nico grows old to be an inspector just like Timeline 2. Vera has not yet met Nico, and she’s married to David and their child Gloria exists. While Vera thinks she is back in Timeline 1, this is soon proven wrong because Angel is not in prison but is living with Clara and Aitor. Timeline 3 is a mix of Timeline 1 and Timeline 2. Vera also confirms that David has been sleeping with the nurse in this new timeline. She now has the combined memories of both Timeline 1 and 2.

Before her memory dissolves away, Vera quickly informs the authorities about the body under the butcher-house. Understandably, Nico takes an interest in the case and arrives at the location and meets Vera. Though not recognizing her initially, Nico smiles at Vera as he realizes that she’s the woman from his television in 1989. We can assume that the two of them get together, and Angel is sent to jail.