Netflix’s DARK, the time-travel saga, gets confusing for primarily three reasons – the flow of events, the individual’s paths through time, and the character’s family tree. In this article, let’s focus on just the key people and how they are related; let’s understand the child-parent relationship. Once this happens, you are 1/3rd your way to fully understand the series. This is Barry, welcome to my site and here is the Netflix DARK Family Tree explained in detail, all the critical characters, spoilers ahead. You can watch Netflix DARK – here.

You’ll find this other link helpful in understanding the Netflix Series DARK:

Here are links to the key elements of this article:

It’s essential to know about the two time-paradoxes that Netflix DARK Family Tree hinges on.

A Predestination Paradox is created because of time-travel where an event in the future predestines an event in the past.
E.g. A man who lost his family in an accident, travels back in time to stop it, only to be the one to cause the accident in the first place.

As you will see in the Netflix DARK Family Tree diagram, a whole set of characters are bootstrapped in the Knotted Worlds. For example, most of the Nielsen Family (other than Jana) don’t exist in the Origin World. The same goes for Elisabeth and Charlotte in the Doppler Family, Noah, Jonas and The Unknown. 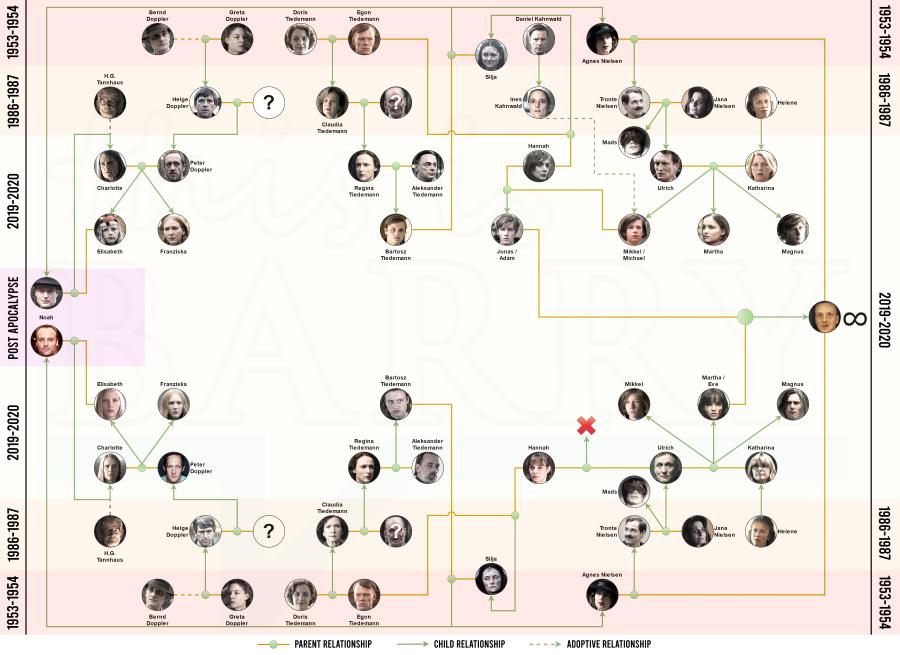 Let’s talk about the most pressing questions before we go down to each character.

How do we know that The Unknown is Tronte’s father, and in both worlds?

The Unknown meets and hands over Tronte a bracelet saying that was his mothers (S03E04). He also says “I knew your mother. But that was a long time ago. You take after her, your eyes. I chose your name back then.”. A while after, Jana asks Tronte if he thinks that man in the morning was his dad.

Later, in the same episode, Doris meets Egon at the police station to talk about Agnes, “Her husband was a man of God. She said he died. I don’t know why, but I got the impression that wasn’t true”. Following this, Doris meets a man of God at the church, The Unknown.

This establishes to a great extent that The Unknown is Tronte’s father. But remember, The Unknown is one man born from Jonas and Martha. He is the result of two worlds. But there are two Agnes and two Tronte. Which then means that the same man, The Unknown, has to be the mate of Agnes and father of Tronte in both Adam’s and Eve’s worlds.

Why is Regina’s father not surely Bernd Doppler?

Yes, I’m aware that the official site lists Bernd Doppler as the father. But the minimum I expect from any piece of cinema is that we get all the answers from the movie or series alone. No one would like it if a ton of questions remained unclear in a film and the maker said, “hey, do read the book for answers”. So considering what we see in the series, we have:

What the series does not show is any chemistry between Claudia and Bernd which suggests a romantic angle. They are always talking business in the scenes they appear together.

Greta is aware that Helge is not Bernd’s child. It’s likely that he too is aware of this else Helge wouldn’t have a menial job in his own father’s Power Plant. This means Bernd that does not have a successor to take his vision forward. Claudia, too, has distanced herself from Egon over the many years.

Considering this, Bernd could either be in a romantic relationship with Claudia, or he could play the role of an adoptive father to Claudia. There is no hard evidence that suggests one or the other. Even that photograph could represent daughter, mother and adoptive father. Which is why I’ve left this as a “question mark with Bernd’s photo” in the family tree diagram.

Finally, it does not matter who Regina’s father is. As long as he is one who has not been bootstrapped in Adam’s and Eve’s world, it could be anyone and it wouldn’t affect the plot one bit.

Let’s go through each of the critical characters in the Netflix DARK Family Tree and their relationship details in each of the three worlds – Adam’s World, Eve’s World and The Origin World. The ones marked in this colour are characters who have been bootstrapped and exist only in the Knotted World(s).

H.G. Tannhaus comes from a line of people who were once part of a secret society called the Sic Mundus who are obsessed with the notion of time travel.
Parent of Marek Tannhaus, Father-in-law to Sonja Tannhaus, Grandfather to a baby by the name Charlotte. Adoptive Grandfather to Charlotte Doppler. Remember, the two Charlottes are entirely different people.
Adam’s World: Is the maker of the Time Machine and writer of the Book, A Journey Through Time.
Eve’s World: We’re not sure if he invents the Time Machine, or writes the book here. This part seems to be a plot hole.
Origin World: In one timeline, he invents a time machine and destroys his world, trying to bring back his dead son and family. In the final timeline, his son and family is alive and he doesn’t tinker with time.

Child of Egon Tiedemann and Doris Tiedemann
Parent of Regina Tiedemann (possibly with Bernd Doppler). Mother-in-law of Aleksander Tiedemann.
Adam’s World: Inherits Power Plant from Bernd. Mentors and takes on Aleksander as a protege. Affair with Tronte. Eventually kills Egon.
Eve’s World:  Same as Adam’s World excepting she is killed by Claudia from Adam’s World and doesn’t kill Egon.
Origin World: There is no Power-Plant to inherit. Never meets Aleksander or Tronte.

Child of Regina Tiedemann and Aleksander Tiedemann.
Parent of Agnes Nielsen and Hanno Tauber (Noah) (with Silja).
Adam’s World: Marries Silja Kahnwald in the 1800s. Eventually killed by his young son, Noah.
Eve’s World: Gets a confession from his father, Aleksander, that he’s a murderer. Marries Silja Nielsen possibly in the 1800s. Possibly killed by his son, Noah.
Origin World: Does not exist.

Child of Sebastian Krüger
Parent of Jonas Kahnwald (with Michael Kahnwald / Mikkel Nielsen). And Silja (with Ulrich Nielsen)
Adam’s World: Married to Michael / Mikkel. Affair with Ulrich. Affair with Egon in the past. Gives birth to Silja Kahnwald in the past.
Eve’s World: Married to Ulrich. Is pregnant but possibly has a miscarriage. Ends up being saved from the apocalypse by an older Egon Tiedemann. Possibly meets younger Egon Tiedeman in the past to have Silja.
Origin World: Neither meets Mikkel / Michael, Ulrich, or Egon. Married to Torben Wöller and is pregnant with their child who she decides to name Jonas. Remember, this Jonas is entirely different from Jonas Kahnwald.

Child of Helene Albers and Hermann Albers
Parent of Magnus Nielsen, Martha Nielsen, Mikkel Nielsen (with Ulrich Nielsen)
Adam’s World: Loses Mikkel to time-travel and realizes he grew up as Michael Kahnwald. Dies at the hands of her mother, Helene, in the past, while trying to save an Old Ulrich.
Eve’s World:  Divorced. Doesn’t time-travel or run into a younger Helene. Lives with her three kids. Doesn’t lose Mikkel.
Origin World: Unmarried. No Kids.

Child of Agnes Nielsen and The Unknown
Parent of Mads Nielsen and Ulrich Nielsen
Adam’s World: Affair with Claudia. Learns of the Origin World from Old Claudia and follows her instruction to kill the ailing Regina Tiedemann.
Eve’s World: Possibly the same as Adam’s World.
Origin World: Does not exist.

Parent of Mads Nielsen and Ulrich Nielsen
Adam’s World: Grows old unwilling to believe her son Mads Nielsen was dead. Blames Tronte for the fact that he was with Claudia the night Mads disappeared.
Eve’s World: Same as Adam’s World.
Origin World: Exists but is not connected to the remaining families.

Child of Ulrich Nielsen and Katharina Nielsen
Parent of Jonas Kahnwald (with Hannah Kahnwald)
Adam’s World: Goes back in time and is raised as Michael Kahnwald by Ines Kahnwald. Married to Hannah. Kills himself to keep the time-loop intact.
Eve’s World: Grows up as Mikkel Nielson, does not travel back in time.
Origin World: Does not exist.

Child of Ulrich Nielsen and Katharina Nielsen.
Parent of The Unknown (with Jonas Kahnwald).
Adam’s World: Has feelings for Jonas. Killed by Adam.
Eve’s World: Thanks to Quantum Entanglement, there are three Marthas and Jonas. The 1st Jonas becomes Adam. The 1st Martha brings the 2nd Jonas to her world to ensure her younger self mates with him to give birth to The Unknown. The 1st Martha follows Adam’s path and eventually dies at his hand. This 2nd Jonas is killed by a 2nd Martha who goes on to become Eve. Finally, the 3rd Martha joins the 3rd Jonas to destroy both Knotted Worlds.
Origin World: Does not exist.

Child of Silja Tiedemann and Bartosz Tiedemann
Parent of Charlotte Doppler (with Elisabeth Doppler)
Adam’s World: Is the right-hand man to Adam. Young Noah is guided by his older self. Kills his father, Bartosz, as a young boy under the instructions of Adam. Travels to the post-apocalyptic future and eventually marries Elisabeth. Is betrayed by Adam when baby Charlotte is stolen, but continues doing his deeds to keep the time-loop consistent. Eventually killed by his sister, Agnes.
Eve’s World: Follows Eve. Eventually marries Elisabeth and fathers Charlotte.
Origin World: Does not exist.

Possible Parent of Helge Doppler and Regina Tiedemann
Adam’s World: Director of the Power Plant. Possible relationship with Claudia and names her his successor at the Plant. The Unknown finally kills him.
Eve’s World: Possibly the same as Adam’s World.
Origin World: He exists, but there is no Power Plant; hence he’s not the director. He seems to be closely associated with Claudia and Regina.

Parent of Helge Doppler (possibly not with Bernd Doppler)
Adam’s World: Considers Helge to be born of sin. While she regrets this when young Helge goes missing (because of Ulrich) for almost 6 months, she goes back to her cold ways with her son. Greta confides in Noah to help Helge recover.
Eve’s World: Helge doesn’t go missing as Ulrich never arrives in her time.
Origin World: Possibly the same as Eve’s World. She never meets Noah.

Child of Charlotte Doppler and Peter Doppler
Parent of Charlotte Doppler (with Hanno Tauber (Noah))
Adam’s World: After Peter‘s death in the post-apocalyptic world, Elisabeth is with Noah. They have a baby, Charlotte. Her daughter is also her mother. After her baby is stolen, Elisabeth becomes the leader of a clan seeking Paradise. A future Elisabeth and adult Charlotte take baby Charlotte, go to the past, and hand her to H.G. Tannhaus, who becomes the baby’s adoptive grandfather.
Eve’s World: Possibly the same as Adam’s World.
Origin World: Does not exist.

And there you have it! Those are all the crucial characters and how they are interconnected in the Netflix DARK Family Tree. Do let me know your thoughts in the comments below.