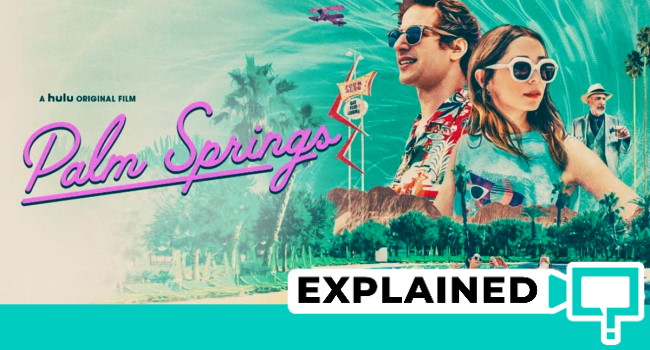 Palm Springs is a romantic, infinite time-loop film directed by Max Barbakow that wastes no time in setting the context. It assumes that you have already watched enough time-loop movies like Groundhog Day, Source Code, Edge Of Tomorrow, Happy Death Day and so on. Palm Springs’ cast has Andy Samberg and Cristin Milioti in the leading roles. It’s a sweet and straightforward film, and this article will be a short one. Here’s the plot and ending of the 2020 film Palm Springs explained.

Why are people time-looping in Palm Springs?

There is a mysterious cave beside the venue of the wedding which has a wormhole that traps any person who enters it into an infinite time-loop. For some unexplained reason, the loop resets when the person either sleeps or dies. I guess we can say the reset is triggered when there is low or no brain activity. The other thing that can reset the loop is when one re-enters the cave. Also, the cycle resets to the first point in the day when one woke up.

How long has Nyles been time-looping?

Well, we don’t know, but unlike other time-loop films, it’s not been days. It appears to be years, a lifetime even. Nyles is merely an outline of the person he once used to be. He’s now a cynical person thanks to what the looping has done to him. There is no escape, and the one person he wakes up next to is cheating on him. He’s been putting up with his situation for decades and now no longer cares about anything or anybody. 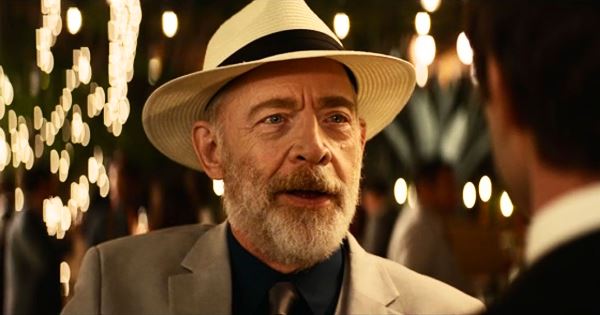 Who’s Roy and what’s his story?

Roy is one of the guests at the wedding that Nyles happens to meet in one of his loops. The two smoke too many mushrooms and head to the cave. Nyles is unable to stop Roy from entering the cave, and this results in him also being trapped in his own infinite-loop. Roy blames Nyles for not having warned him about the eternal time trap, so he exacts revenge by killing Nyles in a variety of painful ways. However, Roy drove to the wedding from Irvine; hence Roy’s loops always have him waking up in Irvine. So he only drives over to kill Nyles occasionally, when he’s really in a bad mood.

Who’s Sarah and what’s her story?

Sarah is the sister of the bride and detests the idea of marriages and has been in a failed one herself. Nyles has slept with most men and women in the wedding party. Sarah is one such person he has wooed and taken to bed thousands of times. The film shows us a loop where Nyles blows people away with his speech and is using prior knowledge of the dance party to coordinate his way towards Sarah. Just as they begin making out beside the cave, Roy shoots an arrow at Nyles. Sarah follows a severely wounded Nyles into the cave and is imprisoned in the never-ending loops. Sarah is cheating with her sister’s husband-to-be and endlessly wakes up by his side on the day of her sister’s wedding. She is desperate to break out of the loop because of this and can’t stand to face the horrible person that she is.

Nyles and Sarah grow close. While Nyles falls in love, Sarah feels that their relationship is superficial because they’re stuck together. Had it not been for this fantastical mishap, the two would have never even remotely considered each other. Now that Niles has found someone to loop with, he prefers to spend eternity with her. Sleeping with Nyles further amplifies Sarah’s need to exit. 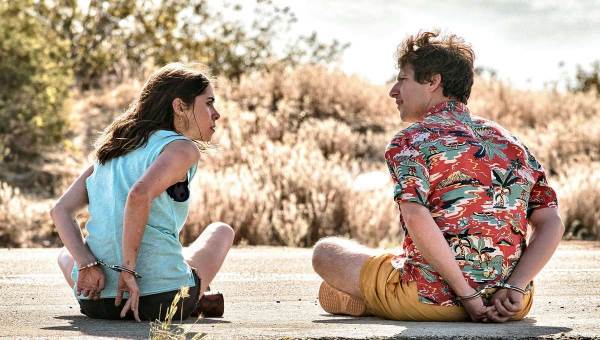 After tricking Roy and crushing his legs against a car, Nyles and Sarah fight and, in the heat of the moment, Nyles spills the beans that he slept with Sarah thousands of times before she began looping. Unable to deal with Nyles’ untruthfulness, Sarah keeps her distance from Nyles. Remember, Sarah wakes up with the husband-to-be, and not in her own room. Also, because she wakes up earlier than Nyles, she’s long gone from the venue before Nyles’ loop begins.

How does Sarah find out how to break the loop?

Well, believe it or not, Sarah decides to learn Quantum Physics. Yes. She spends years in her loops studying and understanding Quantum Mechanics with help from tutors over the internet. A little over the top but Sarah is only learning enough to understand the jargon so that she can experiment a little to understand the nature of the loops. In her research, Sarah finds out that there is a finite time when a person stays in the cave’s wormhole before being reset. At this point, an explosion could throw the looper out.

Sarah finds herself a goat which she first sends into the cave to start it looping. This enables her to track and locate the goat each day to confirm that it is indeed in loops. She then straps C-4 onto the unsuspecting goat and sends it into the cave again and blows it up. The following day, the goat is not in its usual spot. In subsequent loops, she’s unable to find it and concludes that the goat is free and hence doesn’t reset where she usually finds it.

As rightfully pointed out in the comments, just like Nyles returns to the loop, the blown-up goat should have ideally returned to its spot. The goat disappearing doesn’t make sense as Nyles doesn’t disappear, Roy finds him in the end. What does disappear is Nyles’ aggregated memories; his memories exit the loop. This would apply to the goat too.

The correct order of events should have been this:

To Exit Or Not To Exit?

Sarah returns to Nyles one morning to tell him that she has figured a way out. Nyles is not too excited about this because he’s scared of what lies on the other side. For all they know, they may wake up 20 – 30 years later or probably even die. Nyles finds this to be a terrible trade-off considering the two of them could loop happily ever after. Sarah is clear, she does not want to live a lie, and furthermore, doesn’t want to wake up cheating with the man who is to wed her own sister later in the day.

Nyles finally realizes that he is absolutely in love with Sarah and would go to the extent of risking death besides her. The two of them enter the cave and blow themselves up. Nyles and Sarah chill at their usual spot, the pool of a house whose residents are out on a day trip. For all the while they’ve been looping it was the 9th of November. The ending of Palm Springs shows us that it is now the 10th of November and the family is back. Both Sarah and Nyles have broken free from their loops and get to move ahead with their lives, together.

Before Sarah and Nyles set off to blow themselves up, Sarah leaves a message for Roy explaining the exit plan. Once Nyles and Sarah break from their loops, their collective memories exit with them too. At the end of Palm Springs when Roy meets Nyles, it is the 9th of November. Remember, Roy is still looping. This Nyles Roy meets no longer carries the collective memories of all the loops. This Nyles is meeting Roy for the very first time and hence doesn’t recognize him. This is proof for Roy that he too can break out of his loop by blowing himself up, and he does, it’s just not shown in the film.

What’s up with the Dinosaurs in end of Palm Springs?

The first time Nyles and Sarah see the dinosaurs, they are both high as a kite and are most likely sharing a hallucination. They’re happily tripping. However, the final scene pans away to show the audience three dinosaurs walking past the landscape at a distance. I’d peg the final visuals to be a metaphoric representation of how unreal breaking out of the loop must feel like. The initial appearance of the extinct creatures was hallucinatory. Sarah and Nyles have been looping for what appears to be a lifetime. Now that they have escaped, their actual yesterday and the life they lived up to the point of the looping would feel as fuzzy and imaginary as the hazy dinosaurs we are shown in the ending of Palm Springs.

Who’s the old lady? What’s up with her?

The old lady is Sarah’s grandmother. Of all the wedding guests, she’s the only one who converses with the looping couple. In the beginning, she tells this to Nyles:

Dear, I have been to more weddings in my life than you can imagine. You might be surprised. And I have to say that your speech is the best wedding speech I’ve ever heard.

and in the end, just before Sarah plans her exit from the loop, she has this to say:

We’ll this is purely speculation, but I believe the old lady is also looping, and she’s not planning to leave. She seems content living this cheerful day over and over again. Nana is perhaps hinting that of all the speeches Nyles has given in the various loops, that particular one was the best. In the end, nana has also probably noticed that Sarah has been missing from hundreds of loops and is finally back to give a speech that appears to be a final goodbye. Nana possibly guesses that Sarah has found a way to exit and wishes her good luck. 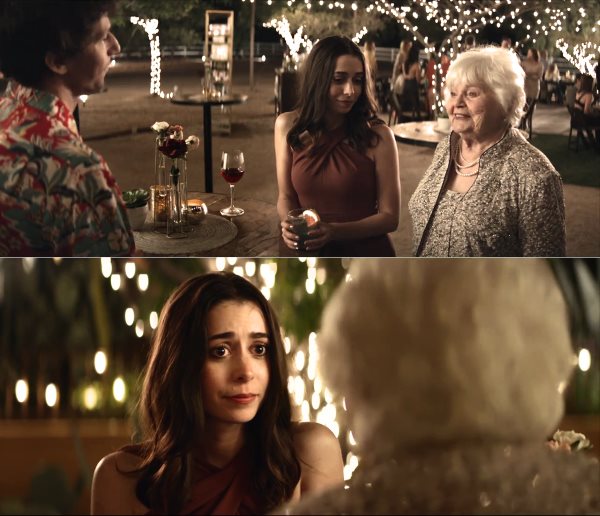 Is nana an older version of Sarah?

Hell no! Nana being an older Sarah is an impossible theory. I think it is a result of watching too much Dark. Remember, the person in the time loop does not age. So if Sarah leaves the loop, and grows old, she would need a time machine to travel back to the date of the wedding. The cave can’t help you go back in time. An old Sarah can’t just find the cave, enter it decades later and miraculously be back at the wedding. She would only end up being in loops on a date many years in the future. So, no, nana is not an older Sarah.