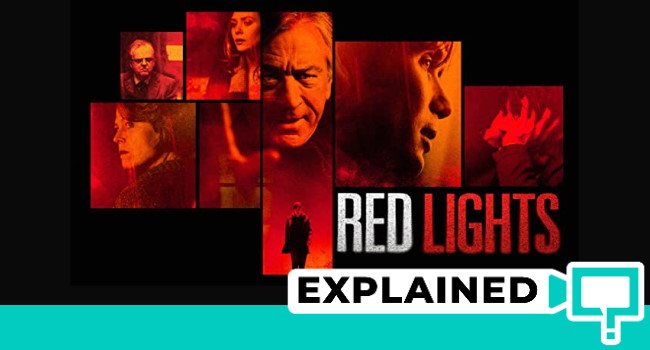 Red Lights is directed by Rodrigo Cortés and stars Cillian Murphy (Scare Crow), Sigourney Weaver (Aliens’ chick) and Robert De Niro (Robert De Niro). This is the first movie of Rodrigo Cortés’ that I’ve watched. He’s only done a hand full of movies so far, another one being – Buried.

The story revolves around Tom (Cillian) and Margaret (Sigourney) who go around disproving the paranormal nature of paranormal activities. They track, monitor and bring down people who talk to the dead, god-men, and the likes. In comes Silver (Robert), a grand, over-the-top, blind god-man who has been out of the scene for close to 30 years. His last act sees a skeptical reporter, who opposes him, die of a heart attack. After an autopsy, Silver’s name is cleared.

Now it’s time to take on Silver and that defines the remainder of the movie. The ending was … well, alright. It was an interesting angle but felt a little too abrupt. If you haven’t watched the movie, you shouldn’t read further as there are spoilers.

Margaret has once faced Silver and he uses her comatose son against her and owns her publicly. Tom now wants to take on Silver. Margaret warns Tom not to. Tom doesn’t listen. He tries to bug Silver’s show to listen into radio frequencies to suggest that Silver is merely putting on an act. However, his attempts are foiled by electrical surges that destroy his equipment and leave him wounded.

Margaret dies of a heart problem she’s been suffering from. Is this related to Silver? No, he’s just a conman. Tom continues to pursue his quest to expose Silver. Tom’s subjected to a series of paranormal activities. Tom doesn’t believe the paranormal part but assumes Silver is behind it.

Silver Put To The Test

Silver agrees to come in for a series of science experiments to prove to the world that he’s beyond science. The tests are unable to prove that Silver was using a trick. However, two of the students under Tom observe the videos of the tests to notice a fraud. The test involves putting Silver and another guy in two rooms. The guy thinks of a number and Silver presses the correct number. This happens with high accuracy. They notice that Silver’s watch and the other guy’s watch are timed to precision. They figure that the location in which the seconds hand is is a code between the two of them to decide which number needs to be selected.

However, Silver has a touch dial watch so that he can feel it to tell the time but through the experiment, Silver never touches his watch. This leads them to the second revelation that Silver doesn’t need to touch the watch as he’s not blind.

Tom lands up at Silver’s show and observes him. In the restroom, he gets attacked and beaten to a pulp. Tom still picks himself up and marches into the show and confronts Silver. As he nears Silver, the whole places starts to fall apart and lights start to fuse. While we think Silver is doing this, Tom flips a coin at Silver which he catches, revealing to the audience that he may not be blind. At the same time, Silver starts screaming out to Tom – “How did you do that?”. Tom simply walks away.

In a monologue, Tom then discloses that he possesses paranormal powers, perhaps psychokinetic. It was Tom all along who was causing the strange events to happen around him. He wasn’t aware but now is.

The ending would have made a little more sense if they stepped into how Tom realizes that he had special powers. He just randomly walks up to Silver and starts busting things up with his thoughts. He does take down Silver with his little coin trick but would something like that be enough to declare Silver fake?