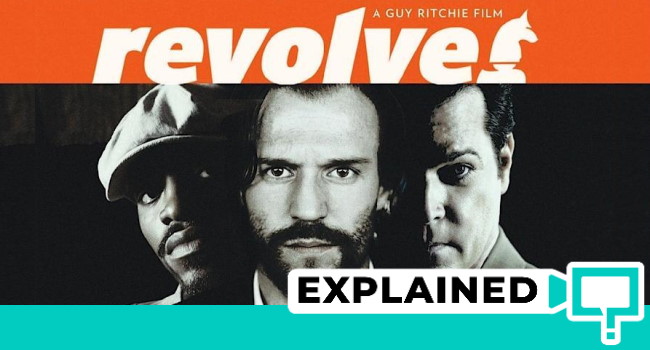 Revolver is a 2005 film by Guy Ritchie, which is a one-time-only Psychological Thriller from the director. While you have to deal with a lot of non-linear storytelling in Ritchie’s films, this one is a mind-bender with plenty going on. The Revolver cast includes Jason Statham, Ray Liotta, Vincent Pastore, André Benjamin, and Mark Strong in central roles. The story is centered on a gambler released from prison who’s looking for revenge. Here’s the plot and ending of the movie Revolver explained.

What is the movie Revolver about?

The central theme in the film is “Ego”. Ego is a person’s sense of self-esteem or self-importance. It is also part of the mind that mediates between the conscious and the unconscious and is responsible for a sense of personal identity. While the second part of the definition of Ego is essential for everyone, the first part only does more bad than good. In the movie Revolver, their Ego is each one’s arch enemy.

When Egos are at war, people are known for doing things that they later regret. The Revolver movie professes that in a game of con, there is an opponent and a victim. And your own Ego is your opponent, and you become the victim. The film addresses the Ego as a different individual that cons you into believing that he is you. But in reality, your true self is better off without the Ego.

If you are humble nothing will touch you, neither praise nor disgrace, because you know what you are – Mother Teresa.

The other theme is chess – the aspect of plotting, scheming and conning your opponent to take the bait and lose. Let’s now go through the events of the Revolver plot in chronological order.

Macha is a gang boss who controls illegal gambling across the city. He has a trio, the three Edies, goons, who are his muscle power. Macha loses his card man and is in the lookout for a replacement. Jake Green is a talented gambler. His brother, Billy, is married and has a daughter. The three Edies harass Billy’s family to force Mr. Green to play for Macha. At one of the games, Mr.Green retorts to an opponent’s insults by shooting him in the foot. In the confusion that follows, the money is gone. Mr. Green is eventually arrested. To ensure Macha’s name doesn’t come out, Billy’s family is kept hostage. Billy’s wife, unfortunately, takes a stray bullet and dies.

Mr. Green is sentenced to 14 years, which is cut down to 7 years because he opts for solitary confinement. In the neighbouring cells, he meets two people – one, a con-man, and the other, a chess player. Mr. Green is in the middle of their conversations passed around inside library books like The Mathematics of Quantum Mechanics. 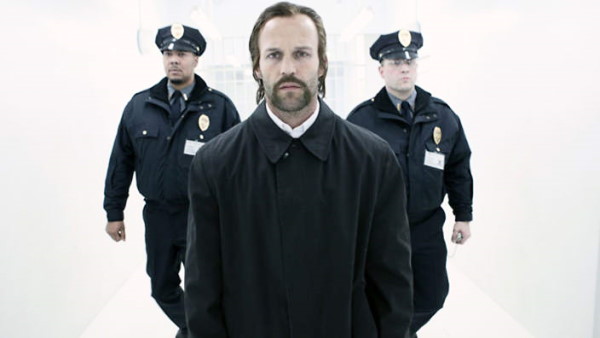 Who are Avi and Zack in Revolver?

In the ending of the movie Revolver, it is revealed that Avi and Zack are the two prisoners in the adjacent cells. Now, I’m going to on a limb here and say that Avi and Zack are figments of Mr. Green’s mind. The solitary confinement gives birth to these two characters. Through his mental conversations, Mr. Green is able to device a rock-solid formula for the process of conning.

The film provides a few hints for this:

Who took Jake’s Money? Who wiped him clean?

While Jake Green narrates that Avi and Zack cleaned him out, he actually cleans himself out to get his revenge on the three Eddies for killing his brother’s wife.

Using the formula that he devised in prison, Mr. Green starts winning big. He becomes rich enough to buy a chain of hotels. After a while, he goes to meet Macha and wins a ton of his money by tossing him for it. Macha is shaken by the lack of fear in Mr. Green. It’s important to note here that Macha, too, is plagued by his own Ego.

Zack meets Mr. Green and hands him a card and says that he can protect him. Soon after, Mr. Green goes unconscious and tumbles down the stairs. The card that Zack gave reads “Take the Elevator”. This is a mental note from Zack because it’s Jake Green’s Ego that doesn’t like Elevators. Jake Green’s mind has already started the process of eliminating his Ego.

Mr. Green wakes up in the hospital, and the doctors tell him they’ll call with the results. When he goes home, Macha’s men attack, and Mr. Green manages to escape because he ducks to pick up a card left on the floor by Zack. After this, Zack shows up and saves Mr. Green and drives him away. Zack is not real, Mr. Green basically shoots his way out of there.

Who is Sorter? What’s up with him?

Sorter is Macha’s hired sharpshooter who is clearly battling his inner demons, his own Ego. It’s revealed that Mr. Green escaped alive because Sorter didn’t have a good feeling about killing him. The card and Zack is just Jake Green’s cerebral drama.

Zack takes Mr. Green to meet Avi, where they tell him that he’s got a deadly medical condition and will die in three days. This is a little trick that Mr. Green has pulled on himself. By letting him believe that he’s going to die, he is trying to sever the love for his money. Though Jake Green is unhealthy, he doesn’t have any fatal condition. I would imagine that the doctors were paid to lie, but they don’t know who’s paid them.

Why are Avi and Zack making Mr. Green give away all his money?

Now, this is the crux of the whole movie. Jake Green says this – “I know nothing hurts more than humiliation and a little money loss.” that’s his ultimate source of pain. In the end, Avi mentions that Mr. Green’s Ego is hiding behind his pain. So if the pain is surfaced, the Ego will show himself. As a first step towards embracing, Mr. Green is going to go through money loss. That is the reason his money is being given to people under the pretext of a Loan Shark business.

Who is Sam Gold in Revolver?

Sam Gold is not real. It is a persona that everyone aspires to become. He’s an all-powerful, feared man who everybody wants to do business with to become wealthier. Specifically, I believe Sam Gold is Mr. Green’s Ego that has been projected as an alias to everybody. It’s a tactic as part of a fantastical con-act.

Macha wants to make more money and has made a drug deal with Lily Walker, who claims to represent Mr. Gold, but even she has never seen him.

Getting even with Macha – what’s up with the cartoons?

Mr. Green first steals the drugs from Macha. When Macha tries to procure more drugs from a Chinese gang, that deal too is interrupted. Mr. Green (with Avi and Zack) steals both the drugs and the money. This is a severe blow to the Egos of the parties involved – Macha and Lord John (the leader of the Chinese gang). The animation in this sequence is to display an exaggerated version of events that happen. It focuses on the reactions of Macha and Lord John to express the extent of their inflated Egos.

Mr. Green soon finds out that his medical reports are clear, and he’s not going to die. That car crash and rewind scene are to show how Mr. Green has averted his death. He goes over to confront Avi and Zack. Macha’s men chase down Mr. Green. One of them carrying a shotgun accidentally blows his own head open with it, ending the chase. When they go to give Macha the news, a waitress who’s from the Chinese gang prepares to shoot Macha. Sorter sees her and fires at her. Knowing she must have an accomplice, he heads down and kills the getaway driver. Sorter then proceeds to eliminate all others from the rival gang and gets confirmation that Mr. Green has been behind everything.

On the terrace of a building with a golden glow sign reading DIAMOND, Avi and Zack meet Mr. Green to let him know that the voice in his head is his Ego’s and not his own. Avi explains that his Ego is the enemy and is hiding behind his pain. And that Mr. Gold is simply the Ego that is driving him towards greed and power. Since no one has seen Mr. Gold, I’d reckon that it’s a cipher created by Mr. Green’s Ego to manipulate and control the various gangs. We’re also given a hint that Avi and Zack are not real as they hear Mr. Green’s thoughts.

Mr. Green takes down his Ego (the lift scene on the 13th floor)

Mr. Green evades security and walks up to a sleeping Macha. According to Mr. Green, humiliation, and a little money-loss are the sources of ultimate pain. Though he has a gun, Mr. Green decides to humiliate himself by begging and groveling for forgiveness from Macha. He exits by taking the lift – where he’ll find his Ego. Throughout this scene, you can see how his Ego is furious that he’s losing control. In the end, Mr. Green conquers his Ego, and a strange sense of peace falls upon him. Macha has Mr. Green at gunpoint. Macha’s Ego is scared because Mr. Green shows no sense of fear at all. Macha breaks down as his Ego is unable to handle the lack of power. He ends up screaming, “Fear me!” and that results in nothing. Mr. Green walks away.

Mr. Green takes Macha’s money and makes substantial donations all over the city under Macha’s name. This soon catches the attention of the media. Lily Walker shows up asking why their deal hasn’t concluded yet. She presents him with a wreath as a warning.

Macha orders his men to take Billy hostage to find the location of Mr. Green. You can see that Sorter is battling his own Ego and when they find Billy’s daughter, Sorter overpowers his Ego and begins to shoot at Macha’s men. Though he’s able to kill most of them, he gets killed by the last survivor. Macha’s goon takes Billy’s daughter over to him.

The ending of the movie Revolver reveals that Avi and Zack were Jack Green’s neighbours in prison. We also get a strong hint that they are not real and are parts of Mr. Green’s mind. Mr. Green takes Macha’s money to get his niece back. Macha’s Ego is in complete shambles and believes that only death awaits him as he has failed Mr. Gold. His Ego decides it is better to die at his own hands than by another. He imagines Mr. Green taunting him to shoot himself, and Macha blows his brains out.

Earlier Avi explains that the only way to make Jake Green face his Ego was to allow him to embrace his pain through humiliation and money loss. This is something that Macha wasn’t able to do. He continued protecting his Ego till the end and ended up making wrong decisions that put his life in threat. Instead of facing the situation, his tainted Ego pushes him to kill himself, and he does.