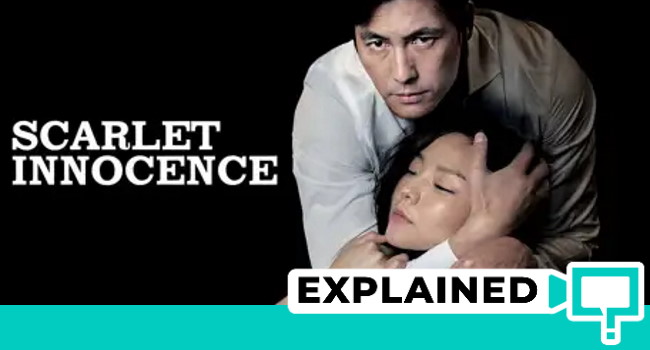 This 2014 Korean Film features Woo-sung Jung (the dude from Athena, the Korean drama) and actress Esom. Yes, that’s a name, in fact, that’s her published full name. She’s a model too. The movie viewers have also been thankful to Han Joo-Yeong for showing up in the film for that short segment. For those snooping around for the name, again, it’s Han Joo-Yeong. Here’s a plot synopsis and explanation of Scarlet Innocence (Madam Bbaengdeok).

This film is about Hak-gyoo (Woo-sung Jung) who is a teacher at a school in Seoul. But due to an affair that he ends up having at the school, he can no longer continue to teach there and temporarily relocates to a small town to teach. Now, has he learnt anything? No, he ignores his depressed wife and kid to go on and indulge in another affair with a girl who joins his class – Deok-i (Esom).

While Hak-gyoo is in it for the fun of it, Deok-i ends up falling in love. After a while of fooling around, the school in Seoul clears Hak-gyoo’s name and he decides to get back to his life. He ditches Deok-i, who is now desperately in love with him.

I’ll get to the sequence of events in a bit. 8 years pass and Hak-gyoo finds himself to be a successful writer but is going blind. Once he’s close to full blindness, a new woman enters his life – Se-jung. She is his neighbour. There is no major mystery to who the girl is, but if you are planning on watching it, spoilers ahead so don’t read further. Go watch it and come back.

When Hak-gyoo ditches Deok-i, she ends up leaving the stove in the kitchen on. She gets dumped and her house catches fire with her deaf mother inside. Yeah, talk about getting the short end of the stick, right? Hak-gyoo returns back home to find that his highly depressed wife is depressed no more, ‘cause she be dead. Yeah, she commits suicide leaving Hak-gyoo and his one daughter Chungee (So-young Park).

Deok-i comes back after all these years as Se-jung to take revenge. She becomes his neighbour. She is even responsible for Hak-gyoo going blind (this is revealed in the end). She ruins him of his eye-sight and his money; she even arranges to get his daughter sold off to a guy who takes her to Japan. Once she’s done all of this, she reveals to Hak-gyoo that she’s none other than Deok-i. Pretty bad-ass eh? Woo-sung Jung has done a good job acting blind; it’s one of the most authentic acts I’ve come across.

Guess what, Chungee’s no soppy li’l kid either. She makes friends with the guys who buy her and comes right back in a few years. She then uncovers the truth about Se-jung and takes her own little revenge. The film ends with Deok-i and Hak-gyoo being forced into an eye operation and her eyes are given to him. The last scene shows Hak-gyoo looking at a blind Deok-i with her eyes. Evil. Everyone learns their lessons in the end.