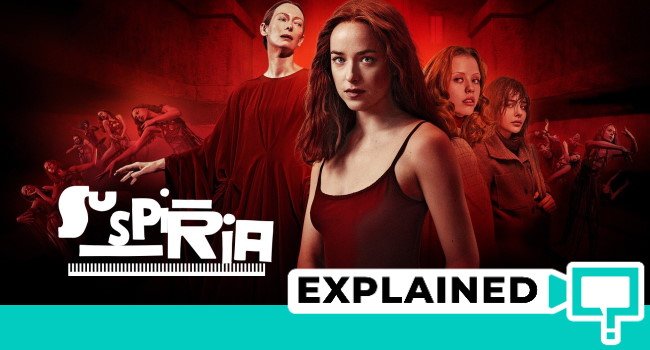 Suspiria is the 2018 remake of the original Italian horror film by the same name made in 1977. Suspiria is directed by Luca Guadagnino and stars Dakota Johnson and the marvelous Tilda Swinton in the lead roles. Tilda pretty much surprises you every time with her versatility, be it as The Ancient One or a Dystopian Maniacal Political Clown. In Susperia, Tilda plays three roles and we’ll get into that below as I do not want to give out any spoilers. This article contains a quick plot synopsis and ending of the film Suspiria explained. Let us also take a look at the difference between the end of the original and the remake.

Suspiria: Meaning Of The Word

Suspiria is the derivative of the word Suspiriorum who is a fictional character, one of three powerful ancient witches and is referred to as Mother Suspiriorum or Mater Suspiriorum. The other two witches are Mater Lachrymarum and Mater Tenebrarum.

Before anything, we need to talk about Tilda’s three roles. She plays Madame Blanc, where she looks close to her usual self. Mother Helena Markos, a hideous old witch. And also Dr. Josef Klemperer an 80-year-old male psychiatrist. The role of the man was even falsely credited as Lutz Ebersdorf. And when asked why did Tilda bother, her response was “for the fun of it”. Ah, we love you, Tilda.

Suspiria 2018’s plot is centered on Susie who auditions at a dance school in Berlin, and gets selected. The film is set in the year 1977. A student by the name Patricia has mysteriously disappeared. We are shown Patricia consulting with Dr. Klemperer stating that the school is actually run by witches. While this is explained later on, the witches imprison Patricia, and feed on her life-force. In short, anyone who tries to expose the school is punished.

Suspiria: Who is Helena Markos?

Markos is the oldest of the witches at the school (the founder) and is the head of the coven. She is looking for a new body to transition to, and Susie has been selected as her next conduit.

Suspiria: Dance Scene: Who is Olga?

Olga, a friend of Patricia, loses her shit and blames the school for Patricia’s disappearance. Well, she probably doesn’t guess that she just accused a bunch of powerful witches. Olga is trapped in a rehearsal room. Susie offers to perform the dance Olga was proficient at. Before she begins, Madame Blac uses her magic to transform Susie’s moves into violent assaults on Olga. In the most gruesome manner, Olga’s body is contorted as though someone was working an Origami swan with her. As if that weren’t enough, the matrons later impale hooks into Olga’s body to drag her away. Ouch. 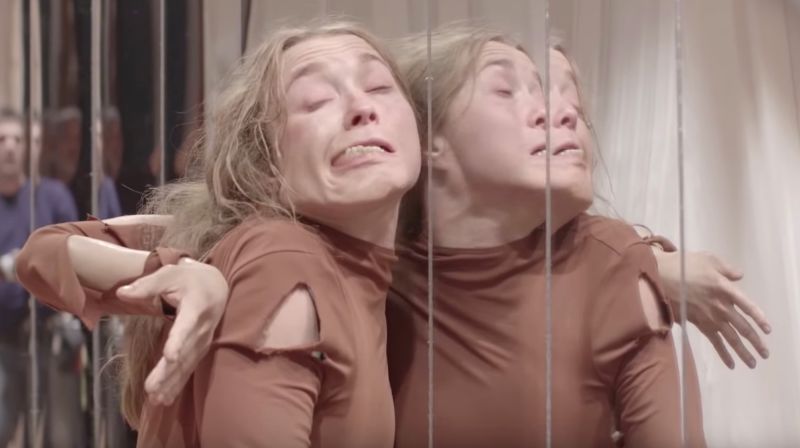 Dr. Klemperer gets suspicious about Patricia’s disappearance and reaches out to Sara, another girl at the dance school, to help him investigate. On the day of the school’s performance of Volk, Sara snoops around and discovers the inner sanctum and eventually locates Patricia who’s alive and withering. Before Sara can escape, the witches alter the floor to break her leg. They heal Sara temporarily and apply mind control on her. Sara shows up and joins the performance only to fall to the floor in pain because of her broken leg.

Upon reaching his home, Dr. Klemperer encounters Anke, his missing wife from the days of the World War. Anke is only a hallucination projected by the witches to draw him back to the school. Dr. Klemperer’s snooping around has gotten him into trouble and now he too shall be sacrificed as part of the upcoming ceremony (where Markos moves into Susie).

Susie is taken to the inner sanctum where she sees that Sara, Olga and Patricia are being prepared for their violent end. She also sees Dr. Klemperer on the floor. The Sabbath is all set to begin where Helena Markos can now transition into Susie. Madame Blanc tries to intervene as she has grown fond of Susie and this angers Markos who then almost decapitates Blanc.

The ending of Suspiria reveals that Susie is Mother Suspiriorum and is infuriated with Markos and her followers. She calls upon Death, which kills Markos and her supporters and releases Sara, Olga, and Patricia from their suffering by offering them death. Susie (Suspiriorum) takes over the school and visits a recovering Dr. Klemperer and tells him the truth about his wife – that she was killed by the Nazis at a concentration camp. Susie also spares him the pain of keeping this memory by inducing a seizure which erases all the horrors he has been witness to.

Suspiria: When did Susie become Suspiriorum?

Well, it’s hard to say. But if I were to take a logical stab at it, I would say many years before Susie landed in Germany from America. Susie is intrinsically drawn towards the school. Over the years, Suspiriorum seems to have begun slow surfacing from within her, and in the end, entirely takes over Susie. Perhaps the last straw was the beheading of Madame Blanc.

The post-credit scene in Suspiria 2018 shows Susie staring away at something and reaching out to it before she leaves the frame. The original 1977 Italian film was one part of a trilogy. The Hollywood remake too could potentially be in three parts.

The critical difference in the original film is that Helena Markos turns out to be Mater Suspiriorum in the end, not Suzy. The school has been planning Suzy’s demise but she happens to kill Markos by stabbing her in the neck with a glass peacock quill. This causes the school to crumble and fall. Suzy escapes as the rest perish along with the school.