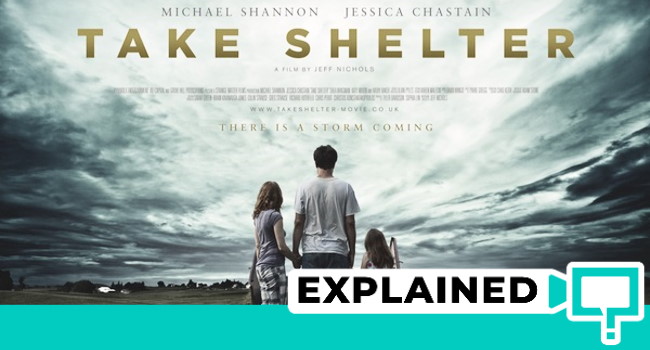 This is director/writer Jeff Nichols’ second film after Shotgun Stories. Michael Shannon (Zod from Man of Steel) has paired with Jeff another time in Take Shelter. He’s a brilliant actor, he really sells the happenings of his mind to you through this film. The movie also stars Jessica Chastain (from Zero Dark Thirty). The movie is about a couple – Curtis (Michael) and Samantha (Jessica) living with their deaf daughter Hannah. Curtis works in construction and the family is struggling to make ends meet. They love their daughter a lot and have been able to get the insurance company to cover an ear operation which can potentially give Hannah her hearing. This is Take Shelter explained.

The problem, however, is that Curtis has been having dreams of a storm which comes with rains of motor oil. The dreams also include him getting attacked by the people he knows and love. These aren’t mere dreams to Curtis because when he wakes up, he wakes up feeling the pain from the dream in real. The film takes you through the struggles of this family as they try to cope with the dreams and the effect it is having on their reality. It is a very well made movie but seems to have fallen into the hidden movie crypt, especially if you are from Asia. Find it and watch it – very intriguing but could feel a tad bit slow.

The movie starts with Curtis witnessing a storm with rain made of motor oil. This is later disclosed to be a dream. He says his bye to his wife and daughter and heads to work. It is otherwise a sunny day. His friend at work is Dewart.

Well they have gone drinking. Perhaps the last time they did this, Dewart got too drunk and his wife blames Curtis for it. Nothing important.

Curtis is clearing the debris. The storm happens again and this makes his dog go crazy. Dog attacks Curtis and he wakes up. The torrential storm is a dream but the pain in his arm lasts the whole day. Later at work, he sees a vision of birds flying around in a strange formation. Dewart doesn’t notice this.

Curtis is driving back with Hanna through another torrential rain. He can barely see. As a result he hits someone. The impact causes him to bust his forehead. A couple of people crack open his car and snatch Hanna.

Curtis wakes up. He builds a dog pen and puts the dog there. He also accesses a storm shelter in his backyard. But it is unusable.

At home, Hanna is looking out into the rain. There is someone outside trying to force their way in. As Curtis gets to a corner with Hanna, furniture in his house begins to float and fall.

This dream is so scary for Curtis that he wets his bed. But Curtis hasn’t told anyone about these dreams yet. He later meets his doc to get medication to help him sleep better. Samantha meets an insurance agent who approves the cost for Hanna’s operation. Curtis and Samantha plan their beach annual vacation. At work Curtis hears thunder when there are no clouds. He vomits. Struggles to breathe. Drives away and stumbles on a container sale.

Curtis visits his mother. His mother was diagnosed with paranoid schizophrenia when she was the age Curtis is now. Clearly Curtis is suspecting his mental condition. He even picks up books from the library about mental illness. Curtis takes a loan to get the storm shelter built. He talks to Dewart to help borrow some equipment from work to set up the storm shelter. Curtis is also trying to get help from free counsellors for his condition. Later, he sees an unreal electric storm when Samantha and Hannah are asleep in the car. He is most likely imagining this one.

Curtis starts work on the shelter. Samantha sees this and gets mad. Obviously, because they have no funds and Curtis is building a shelter by taking a loan.

This time Curtis has a seizure because of his dream and Samantha calls 911. The dream is not shown but Curtis explains it to be about Dewart attacking him with a pickaxe.

Curtis finally tells Samantha about the dreams he has been having and the feeling it has been giving him. He tells her that he needs to build that shelter because he believes his feelings. At work, Curtis requests his boss to shift Dewart to another team. Later Curtis’ brother shows up and tells him to stop building the shelter. He tells Curtis that he’s worried for him and Samantha. Curtis gives away his dog to this brother. Effectively, Curtis is cutting off from everyone who has posed as a threat in his dreams.

It is a stormy evening when Curtis walks to his kitchen. He sees Samantha who is soaking wet and staring hard at him. She looks to reach for a knife, Curtis is nodding his head as if to say – “Please, don’t”.

At breakfast Samantha touches him but retracts his hand in fear. Because Dewart was removed by Curtis, he tells Curtis’ boss about the unlawful borrowing of equipment for the shelter work. Curtis gets fired. Curtis tries to visit his counsellor but she gets transferred. He leaves in disappointment.

Samantha asks if she was in his last dream. Curtis confirms. He asks if she is going to leave him. She says no. She plans to get a job, asks him to get another job and that they cancel their beach vacation. She also urges him to join her at the Lion’s Club dinner. He goes. Dewart is there and confronts Curtis for removing him from the team. The two fight and Curtis has a break down. He screams at people telling them that a storm is coming, a storm that makes people act crazy, and no one is prepared. Clearly making him look like the crazy person.

When Curtis is working on his truck, Hannah goes to the middle of the road. Curtis runs after her. The birds do the funny flying again and swoop at Curtis and Hannah. The next thing he knows it starts raining dead birds. He runs for it. 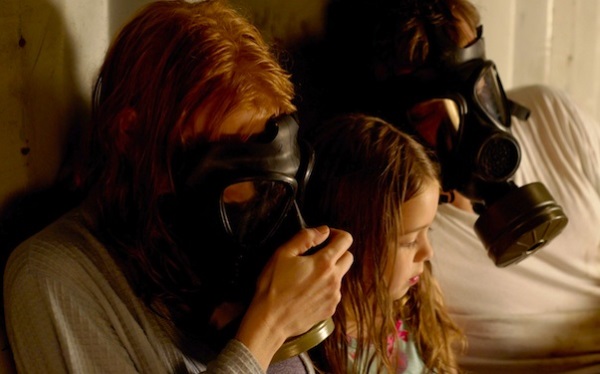 Is there really a storm when they are in the shelter?

Right after the scene above, Samantha wakes up to ringing sirens. Now this is real. The siren is blowing indicating a storm. So the three of them rush to the finished storm shelter. They wear oxygen masks and eventually sleep off. When they wake, Samantha and Hannah have taken off their masks. According to them, the storm has ended. According to Curtis, the storm is still violent and he can hear it and feel it against the door. Samantha asks him to open the door and go out. She tells him that he needs to trust her and face his fear. So he does. He opens the door to a sunny sky. The storm has passed, the neighbours are picking up furniture that has been blown away. So this storm is real, it is not part of his imagination. But the storm is way more powerful in Curtis’ mind while in reality, it’s not that bad.

Samantha and Curtis meet a psychiatrist. The psych tells them that they should plan on doing something normal, like their beach holiday. After which, the psych tells Curtis that he needs to get admitted to get himself treated. This means that he will need to be away from his family to get treatment at a hospital. Curtis agrees.

The last scene involves Curtis, Samantha and Hannah at their beach vacation. Hannah points to the sea and shows the sign for “storm”. Samantha comes outside and sees the sea. The three of them see a devastating storm coming in from the sea. It begins to rain and Samantha feels the rain, she feels the motor oil. She looks at Curtis and says – “Okay”.

The literal interpretation would be that Curtis was right all along. The visions he was seeing were not delusions. The impending storm is real and they are all doomed as he has foreseen in his dreams. This would be a very Night Shyamalan type of ending. The film is not about that. It is primarily about a person who is suffering from a mental illness that is escalating within him. He wants to be there for his family and they want to be there for him.

The second option is that his paranoia has somehow rubbed on to his wife and kid. Now, they too are able to see the storm and feel the oily rain. This explanation is ridiculous. Schizophrenia is not transmitted like a common cold. So this can be ignored.

Let’s recap some of the key things that have happened in the movie so far:

– The storms, with severe tornadoes, appear in Curtis’ dreams alone.
– All his nightmares have the storms and torrential rains.
– Reality does see a storm but it’s not as tremendous as the ones in his dreams.
– Curtis’ mother was diagnosed with paranoid schizophrenia when she was his age.
– Curtis initially fights his situation alone.
– The psychiatrist has confirmed that Curtis needs to get admitted to get treated.
– Samantha shows support by coming up with a plan to fund the shelter and their future.

The third option is that the last scene is not real. It is a dream. Dream 8. Remember, they don’t have the funds to go on that trip. Curtis doesn’t have a job. They need to pay back the loan on the storm shelter. While the psych suggests that they go on their trip, they probably can’t because of their finances. So what does it mean if the last scene is also a dream? It means that the increased size of the storm as compared to the earlier dreams means the mental illness is growing on him – just as the psychiatrist indicates. However, this dream is not violent. In this dream both his wife and kid can see the storm like he can, feel the motor oil like he can. He knows he is not alone. He knows Samantha shows him support. Now, in his dream, he can visualize Samantha seeing the storm and understanding what Curtis is going through. While the illness has gotten worse, he also feels the support he has from his family to fight it. I feel this interpretation adds more mass to the movie than a Shyamalan-ish ending.