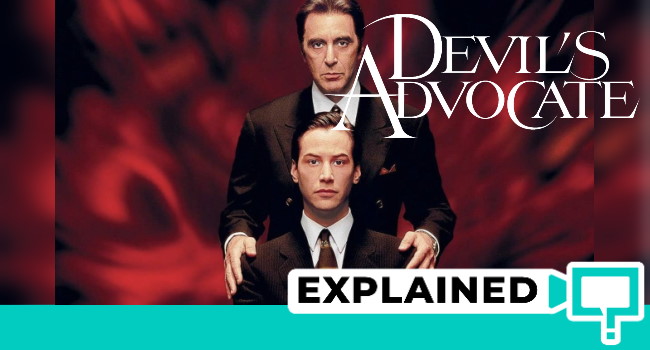 Devil’s Advocate was directed by Taylor Hackford who gave us other films like Proof Of Life and Ray. It stars Keanu Reeves, Al Pacino and Charlize Theron in lead roles. The story is centred around Kevin (Keanu), a defense attorney who has never lost a single case. He’s married to Mary Ann (Charlize). The story focusses on Kevin’s need for “always winning” and “staying on top”. His winning streak causes him to cross paths with John Milton (Al Pacino) who eventually recruits him. The rest of the film deals with the strange happenings in their lives and effects it has on their marriage and Mary Ann’s health. When I say strange, I mean supernatural. I can’t say more at this point without giving out spoilers. If you haven’t watched it, it’s a great catch up film. Go watch! Here’s the film Devil’s Advocate explained.

Right, so this is not a film that has any supernatural events. Nope. Let’s take a quick walk through of the movie. Kevin is a defense attorney who has never lost a case. Winning is everything to him. He indulges in vanity, specifically – excessive pride in his abilities as a lawyer to find loopholes and winning cases. The first case we are shown is Kevin defending a school teacher who is accused of child molestation. Even though Kevin knows his client is guilty, he is more focused on winning the case.

The scene in the bathroom. This is the important scene. Everything that happens in the film after this is Kevin imagining what would happen if he went out and defended his child-molesting client.

Kevin’s vision and the rest of the film:

He gets the girl to say “I didn’t want to be the only one”. But that is just his play and he wins the case as the girl’s credibility is in question. After this, his popularity grows even further. He gets a call to help select a jury for an upcoming case. His choice in the jury members helps win that case. The head of the firm, for which he helps pick the jury, is John Milton. He offers Kevin a big job and a big apartment in Manhattan. Kevin accepts and moves with his wife.

Kevin gets involved in a case defending a billionaire douchebag who is accused of killing his wife, kid and maid. Kevin is excessively involved at work and is unable to give Mary Ann any time. Mary Ann starts seeing demons everywhere. She tries to tell Kevin that she’s not insane. Kevin doesn’t pay heed to it.

Kevin helps the douchebag win the case clearly knowing that he is guilty of murder. Kevin is unable to accept defeat as it hurts his pride – vanity. In spite of John telling Kevin that he will back him, Kevin uses false testimony and wins the case. Mary Ann imagines John attacking her inflicting cut wounds all over her body. She runs to a church. Kevin finds her there and when she explains John attacked her, Kevin loses it because he had been with John all day at court. When Kevin sees the wounds, he admits Mary Ann to a mental institution.

At the institution Mary Ann commits suicide by cutting her throat with a shard of glass. Kevin’s mother tells him that John is his father. Kevin confronts John who admits to everything. He reveals himself to be the devil and has seen evil in Kevin and wants him to father the Antichrist (with his half sister). Kevin chooses free will and shoots himself, kills himself.

Time rewinds back to the bathroom scene. Kevin yelps looking at his reflection. He’s shocked by what he just imagined. Think of this as Kevin getting scared of seeing the “devil” in himself. All that you saw after the bathroom scene is a play out of the metaphor. Kevin realizes that what he’s doing is wrong and chooses to not defend his child-molesting client. Kevin allows himself to lose. But in the end, when the reporter pleads Kevin for an interview, promising to make him a star, Kevin gives in to vanity once again and accepts. The reporter is shown to morph into John and quote “Vanity, Definitely my favorite sin”. John’s character represents one that harnesses evil in people. One who would like to see evil spread. The devil. Even though Kevin throws the case, he still wants to be the star and accepts the interview. Kevin continues to indulge in vanity as it is part of his core nature.