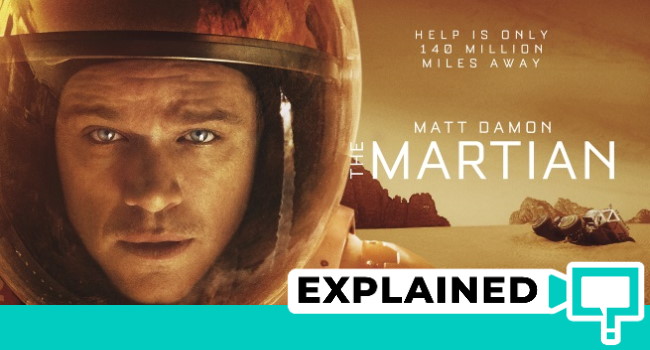 In short, Martian is a good film with no major pitfalls but also nothing that makes you go wow. Matt Damon (Mark) is the Martian by the way, in case the various posters didn’t make it quite clear already. He and his crew are on Mars for research purposes. The crew is captained by Jessica Chastain (Melissa) and other members include Michael Anthony Peña (Martinez, yeah again that name) and Kate Mara (Beth). Due to an unanticipated storm that hits them they are forced to prematurely leave. The crew looses Mark and when they get no response from his comm, they are forced to assume he is dead and they leave. Well, as one can expect, Mark is not dead. He is left alone on Mars with limited food and no communication. The remaining film is about Mark does going forward. Here’ the plot and bits of explanation of the film Martian. 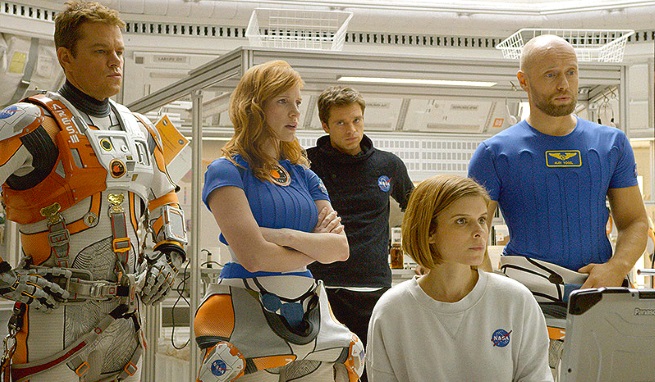 Unlike in Castaway, Matt Damon doesn’t have to carry the whole film independently. There are plenty of characters that come to his rescue, like all of America. The ground staff that brings attempts to save Mark includes the Director of NASA played by Jeff Daniels (Teddy), the Director of media relations for NASA played by Kristen Wiig (Annie) and our favourite mission director played by Sean Bean (Mitch). Since Sean Bean is a ground staff in this one, he doesn’t die. Awww. However, Bean does have a cool moment in the film trying to explain what The Fellowship Of The Ring was about. Very nicely done. The ground staff figure out that Mark is still alive but have no way of informing him that they know.

Mark is a botanist in the team and therefore works a way to try and grow his own food stock in a simulated earth-like environment. The distance to Mars from Earth is 4 years and their original stay was planned for 31 days. Till the next mission’s landing in Mars, Mark has to find a way to keep alive and get a message across that he’s planning on being at the site of the next mission. The film flows smoothly enough to bring all the characters into a crisp climax, scientifically questionable, but crisp.

Should you watch the film? Well, after Gravity, a lot of the films have started representing action sequences in space in a similar fashion. While you should catch it in the big screen, there is nothing new you are going to be offered in the visual section. The story is interesting and not heavy and one sided.

1) Why did the crew think Mark was dead? How did he survive?

Mark gets bashed in the face by the large device flying in the storm. After this they hear nothing on Marks comm. They have no visuals on him either. They assume he is dead as a result. Mark gets stabbed through the comm device and that causes him to lose communication with his crew. The stab doesn’t destroy his suit, it keeps the opening sealed. This keeps the pressure and oxygen from getting instantly depleted from his suit. 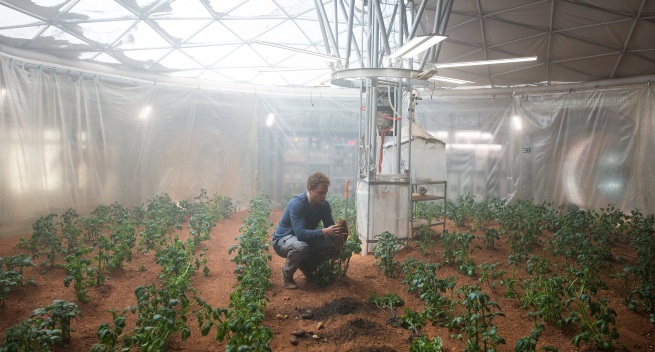 2) How does Mark grow potatoes in Mars?

Mark is on an artificial habitat called the Hab. He uses the soil of Mars in the Hab and adds his own shit to it. Yes, his own shit. This acts as the fertilizer and makes the soil capable of growing crops. Potatoes are the easiest to grow and harvest and also serves as a great source of carbohydrates. Apart from the fertilizer, he needs water to grow stuff. He uses the fuel from the “landing pod” they used to get to Mars for the Aries III project. Water is a byproduct created when fuel is burnt in a controlled environment.

3) How does NASA realize Mark is still alive?

NASA uses the daily imaging of the Hab site of Mars and notice that things are being moved around in a specific pattern. Eg: the solar panels are cleaned up and the rover is moving around. This confirms to them that since the movements at Hab are not random, it has to be Mark. 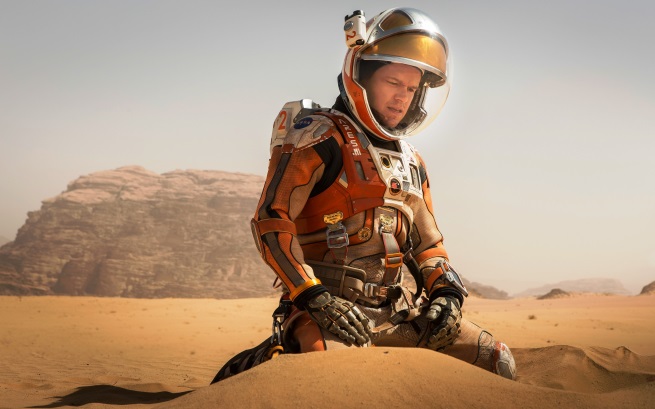 4) How does NASA establish contact with Mark for the first time using the camera?

Based on the rover movements, NASA understands that Mark is planning to travel to the Aries IV site where the next mission is going to be. One of the days NASA notice that Mark is traveling in a new direction. A quick calculation reveals that Mark is on his way to fetch an old pathfinder probe from an earlier mission in 1997. Seeing this NASA quickly prepare to receive the communication from Mark and they do. Given that the only way they can communicate is by moving the pathfinders camera, Mark sets up the initial question as a YES or NO. Once the camera moved to YES, Mark too gets the confirmation that NASA can see him and knows he is alive.

5) What is the hexadecimal style that Mark uses for communication, why not alphabets?

There are 26 alphabets from A to Z. which means that if you put the Alphabets in a circle, each alphabet would be separated by the next one by 360/26 = 13 degrees. This angle is so small it would be very difficult to say which alphabet the camera was facing. If numbers were added to the mix, that would be 0 to 9 making the total to 36 characters and the degree of separation 360/36 = 10 degrees. This would make it impossible to say which character the camera was pointing to. The hexadecimal system has only 16 symbols. Which means 360 / 16 = 22.5 degrees. This is far less clutter and more accurate.

6) What role do the Chinese (CNSA) play in the rescue?

Given that the volume of food that Mark has and can produce, he is going to run out of food. So NASA plan on sending a probe with supplies to Mars so that Mark can survive till the crew of Aries IV arrives. But since they are short on time, Teddy suggests that they skip a few inspections and advance the launch. This causes the probe to explode soon after the launch. Seeing this the Chinese team offer to help by providing their booster technology which is ready to go. They do this from a humanitarian perspective and will also help throw light on their technology capabilities to the world. 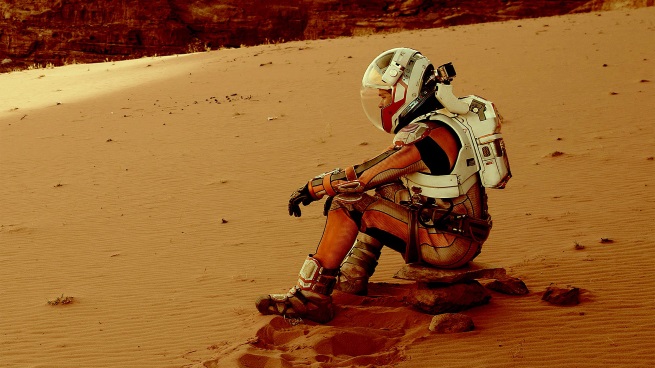 7) What is the whole deal with that Rich Purnell kid and what is his solution?

Rich Purnell is a JPL astrodynamicist who figures a better way to save Mark. The only way to retrieve Mark is on the next Mars trip – Ares IV. Hermes is the ship that the rest of Mark’s crew is on and they are heading back to Earth. Rich suggests that instead of waiting till Ares IV to get to Mars, Hermes can accelerate towards the Earth and use its gravity to slingshot around and head back towards Mars. Instead of sending the supplies to Mars, the supplies can be picked up by Hermes for the crew onboard and go back to Mars to pick up Mark. Slingshot will help save a lot of fuel and Hermes can reach Mars without having to land on Earth.

8) What is the last minute confusion in getting Mark? Why all the acrobatics in space?

While there is sufficient fuel for the Hermes to make the trip back to Mars, they don’t have sufficient fuel to descend down to Mars and take off again. Instead they plan pick up Mark as they fly past. The probe that Mark uses is what was sent for the Aries IV mission as the launch vehicle. Mark removes many of the parts of the launch vehicle (to reduce weight) to get himself all the way to Hermes for the pick up. In spite of removing everything he’s instructed to, Mark can’t get enough altitude. Hermes crew decide to blow open one of their compartments to decelerate and align their path to intercept Mark. Even this is not enough to cross paths with Mark, they are still many meters apart. Mark’s suit is pressurized with air. If he cuts a small slit in the suit around his palm, he can use the thrust of air exiting his suit to navigate himself towards Melissa. This is what Mark refers to as flying around like Iron Man.