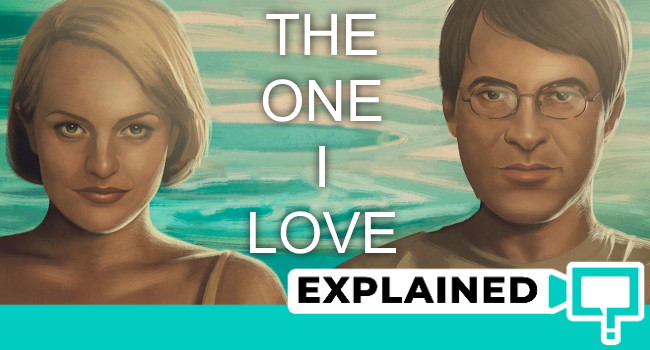 The 2014 movie, The One I Love, is a psychological thriller sprinkled with some fantasy and is directed by Charlie McDowell. It stars Mark Duplass, Elisabeth Moss, and Ted Danson. The plot revolves around a couple having problems with their marriage and seek counseling. The counselor advises them to spend a weekend at a house, and when they do, things go crazy. The film does remind you of another movie by the name Coherence. I can’t say more as this is not a The One I Love review. However, it’s a pretty entertaining movie, do give it a watch if you haven’t already. Here’s The One I Love explained, spoilers ahead. If you are mainly looking to know what happened at the end of the film, go here – The One I Love: Movie Ending Explained

The One I Love: Movie Plot Synopsis 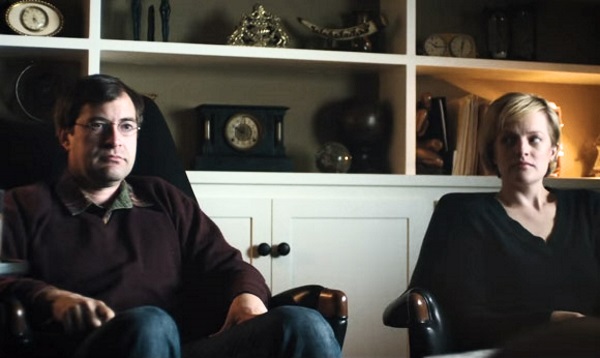 The two of them met at a party and hit it off straight away and eventually get married. But then Ethan ends up cheating on Sophie, and over time, they stop finding happiness in each other. So they end up at a marriage counselor who assess that they are currently incompatible (through the means of an odd random piano note test). Of course, this is part of the therapist’s plan as he intends to send them to his villa where he has prepared the doubles of Ethan and Sophie. Here on, we’re going to call the real couple Real-Ethan and Real-Sophie, and the doubles Ethan’s Double and Sophie’s Double.

The Therapist’s Secret in The One I Love

To understand what exactly the counselor is up to, do check out – this article. In short, the way this therapist deals with troubled couples is to send them off to his enchanted villa. In this villa, his previous subjects have been magically transformed to look like Ethan and Sophie. The end game is that the real Ethan and Sophie will be trapped in his villa while the doubles will exit and live happily. He will then progressively transform Ethan and Sophie to look like his next subjects and keep repeating this cycle.

The Retreat and The Guest House

Real-Ethan and Real-Sophie head out to this villa and have a lovely night of wine and flirting. After that, Real-Sophie heads to the guest house to check it out. Ethan’s Double shows up and makes love to Real-Sophie. She returns to the main home to catch Real-Ethan sleeping. She thinks he is playing a stupid prank on her, of not remembering the sex, and she goes to sleep. Confused, Real-Ethan goes to the guest house to sleep, and Sophie’s Double shows up and sleeps with him on the sofa.

The One I Love: Bacon Breakfast

In the morning, Sophie’s Double prepares Real-Ethan breakfast. Not knowing who he is with, Real-Ethan tries to understand what was that whole sex fight about. Sophie’s Double dodges the conversation with generic answers. She doesn’t know the details of the fight. After that, Real-Ethan is confused about how Sophie is okay with him eating bacon. Real-Sophie hates it.

Real-Ethan leaves, he meets Real-Sophie and brings her back to the guest house and notices that the breakfast and the plates are all gone. Real-Ethan then explains to Real-Sophie that they are caught in some Twilight Zone kind of thing with doppelgangers of each other. They both individually enter the guest house to confirm this.

Run away from the villa or stay on?

Real-Ethan wants to get the hell away from that place, but they go back because Real-Sophie insists. First, Real-Ethan goes in and has a conversation with Sophie’s Double and heads back out. He feels that they should investigate the doubles into understanding more. Real-Sophie doesn’t want that she only wants the experience. Clearly she wants more of Ethan’s Double.

They set up some rules around meeting their doubles – like no intimacy, or spying on each other. They also decide this is going to be an exercise in trust. And that if either of them becomes uncomfortable with this unusual situation, they would both leave. They decide upon 15-minute time slots to be with their doubles.

Planned Individual Meetings in The One I Love

Real-Sophie goes in and begins talking to Ethan’s Double. At once, she’s smitten by him as he tries to coax her into falling in love. He gives her a shoulder massage. She ignores how long she’s been inside, and Real-Ethan gets curious (jealous even) and peeks in. Real-Sophie sees him peeking and leaves the guest house.

They compare notes about how Ethan’s Double looks a little different – the hair, no spectacles, etc. More importantly, Real-Sophie seems to think that Ethan’s Double is the Ethan that she prefers. That night Real-Ethan enters the guest house and leaves his phone on audio record mode and leaves. When he goes back to get it, he can’t find it, Sophie’s Double hands him the phone showing no signs of suspicion. The recordings are just a bunch of static.

Real-Sophie is falling for Ethan’s Double

In subsequent visits to the house, Real-Sophie begins enjoying Ethan’s Double’s company. She asks him why he cheated on her. Ethan’s Double has a nicely crafted answer that Real-Sophie has always wanted to hear.

I have no excuse. Of course I was insecure and of course we were drifting apart at the time and instead of trying to communicate I lashed out and I made a terrible decision, and that’s no excuse. You had every right to abandon me, but you didn’t, and you stuck in there with me and you went to see that stupid therapist that we see, even though we didn’t want to, and you kept going, and you kept trying, and you met me halfway and I was defensive and I’m sorry about that. And I want to say thank you for making those efforts for us, and I promise you I’m going to do my best to meet you there, okay? I promise.

Looks like Ethan’s Double has spent time preparing for that piece. This is enough to get Real-Sophie to entirely fall in love with him.

What are those messages on Ethan’s phone in The One I Love?

Real-Ethan goes through his voice mail. There is one from his friend claiming that Ethan called him at 2AM stating he had forgotten where he lived. The next message is from Ethan’s mother where she claims that their previous conversation was weird. There is a third message from another friend talking about the name of the street Ethan grew up in.

What has likely happened is that Ethan’s Double has taken the numbers from Real-Ethan’s phone and is calling his friends and family to get more information on Real-Ethan to woo Real-Sophie. Remember, Ethan’s Double is someone who’s been transformed to look like Real-Ethan, he doesn’t have his memories.

Ethan tricks Sophie into sleeping with him

By now, Real-Ethan suspects that Real-Sophie is falling in love with his double. He lies saying he going to the store and times his entry into the guest house with Real-Sophie. After that, he impersonates his own double, and the two of them make love. Odd yeah?

Real-Ethan is mad because his wife is cheating on him with his own double. In his anger, he demands to know who Sophie’ Double really is – a robot or a spirit, or something else altogether. She doesn’t give him any details. But what we need to understand here is that Sophie’s double too is bitter for the same reason as Real-Ethan. She is also losing her spouse to Real-Sophie.

Later, Real-Sophie is having some bedtime fun with Ethan’s Double. She notices Real-Ethan’s clothes and tries to ask about them, but Ethan’s Double diverts the conversation. I think that the acquisition of clothes is a mark of the double becoming free. Real-Ethan interrupts them by being asked to be let into the guest house.

While it is true that the marriage was put into strain by Real-Ethan, he’s currently making all the sense in the world. He says that he would never abandon the Real-Sophie for her double. She, on the other hand, cares more for the double knowing well that she’s ditching her real husband. And she’s okay doing that because it is giving her happiness.

The One I Love: Dinner with the Real and the Doubles

Just as Real-Ethan and Real-Sophie are arguing, they enter the main villa and notice that their doubles are waiting for them. After that, the four have the most awkward dinner. Ethan’s Double goes on to explain what is happening is just a cosmic aberration. Well, he’s lying. It’s not a random cosmic event, this is a planned act to steal identities with some voodoo shizz thrown into the mix.

When they are alone in the kitchen, Sophie’s Double snaps at Real-Sophie because of what she has been up to with Ethan’s Double. Ethan’s Double turns Real-Sophie against Real-Ethan by disclosing that he never went to the store; she asks him to leave, and Real-Ethan goes to the guest house.

Real Sophie just turned against Real Ethan, thereby freeing Ethan’s Double. In turn, Real-Ethan is now going to be trapped. Real-Ethan enters the guesthouse and logs into the computer to find voice files and pictures. Realizing that the entire weekend was a set-up, he tries to leave but he can’t. To know more details of what the voice files mean, go here.

Next morning, Sophie’s Double shows up and explains what’s really going on. She says that Ethan’s Double fell in love with Real-Sophie and that was not part of the plan. She goes on to explain that the idea was only to pit Real-Ethan and Real-Sophie against each other so that they would both be trapped. After that, the doubles could leave into the world “as them”. Now, Sophie’s Double prefers to be trapped with Ethan’s Double rather than watching him exit with Real-Sophie. So she helps Real-Ethan leave the guest house.

Ending of The One I Love

Once they are out, they go looking for the therapist and can’t find him. Time passes, and things seem to be going really well between Real-Ethan and Sophie’s Double. He doesn’t know that he’s not with the Real-Sophie until she offers to make him breakfast – “I was thinking maybe eggs and bacon“. The film ends.

Well, it is entirely possible that Real-Ethan did leave with the Real-Sophie and over time, she changed to adapt to his needs. But think about it, their marriage got into trouble because of what Real-Ethan did, because of him cheating. There is no reason for Real-Sophie to take all the effort and change to accommodate for Real-Ethan, she considers herself to be the victim. And besides, it’s a lot darker and ironic that he exited with the wrong Sophie after everything he preached about not leaving the Real spouse behind.