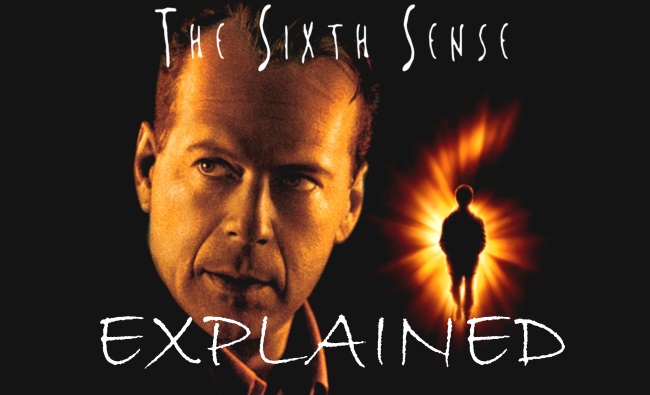 The movie stars Bruce Willis and is the first directorial recognition for M. Night Shyamalan. After all the years, many still seek explanations for this film. Well, here it is, in chronological order – the film Sixth Sense explained, spoilers ahead.

Malcolm Crowe (Bruce) is a child psychologist. One of his patients, Vincent (Donnie Wahlberg .. yes, Mark’s brother), was a kid who saw ghosts. Crowe doesn’t believe him and treats him for a mental disorder. Vexed with life, Vincent shows up years later at Crowe’s place and shoots him, and then kills himself. At this point, Crowe dies. Yes, this is one of the most famous spoilers from that time. I remember some jerk, in our college dorm, printed out “Bruce Willis is a ghost in The Sixth Sense” and pinned it to the notice board. Grrr. Anyway, moving on…

Living on as a ghost

The central theme of the movie is about dead people who are still “on an about” without passing over to their after-life because they have some unfinished business. Some ghosts know they are dead, others don’t even realize it (like Crowe). Some time passes, dead Crowe now exists in his house believing to be alive. His wife can’t see him; as a result, there is never any conversation between them. One of his regrets is not helping Vincent, and the other is not letting his wife know she’s most important to him.

Cole Sear (Haley Joel Osment) is another kid who can see dead people. We aren’t shown how he got talking to Crowe, but they do. One thing is clear though – the ghosts somehow get drawn to people like Cole because of their ability to interact with the deceased. Cole knows Crowe is a ghost but doesn’t tell him that. Crowe believes that Cole is his patient and is treating him. Cole announces to Crowe that he can see dead people. Initially, Crowe doesn’t buy it. On hearing an old recording of Vincent, Crowe notices a weeping man in the background. He realizes that Cole, like Vincent, is telling the truth.

Crowe, ironically, suggests that Cole should confront the ghosts who come to him and try and help them out. One such spirit is a girl by the name Kyra (Mischa Barton). Kyra’s story is that her stepmother had slow-poisoned her to death. But one day, Kyra ends up videotaping the act of poisoning, by mistake. Before she could do anything, she died. Now, dead-Kyra is trying to get her father to see the tape so her sister can be saved from the same fate. Cole locates the tape and shows it to the father, helping Kyra to move on. Over time, Cole becomes more comfortable talking to ghosts and helping them out. He now finds it to be his turn to help Crowe. Cole tells him to speak with his wife when she’s sleeping. It’s evident that Crowe has tried to talk to his wife after he died and she’s walked away (not because she doesn’t care but because she can’t see him). By talking to her when she’s sleeping, well she can’t walk away, can she? Smart kid.

Cole and his mother

He finally comes clean with the fact to his mother and gives her concrete evidence by telling her that his grandmother (her mother) visits him. His mother has been asking the grandmother (at her grave) if she makes her proud, no one else knows this. Cole says that the answer is “every day” and asks his mother what the question was. His mother breaks down and hugs Cole, she now believes him.

Crowe, now satisfied that he has helped Cole, goes back home and finds his wife sleeping on the couch. This wife is sleep talking, she doesn’t feel Crowe presence or anything like that. In her sleep, she says “I miss you, why did you leave me?”. Crowe believing that his wife is talking to him replies saying “I didn’t leave you”. Then his wedding ring falls from her hands. Crowe looks at his hands and notices that he hasn’t been wearing his ring. He remembers everything Cole has been telling him. He remembers dying. Crowe realizes that he stayed behind to help Cole and to tell his wife that she was never “second”. His wife is still sleep talking and says “good night”. Crowe makes his peace and moves on to his after-life.