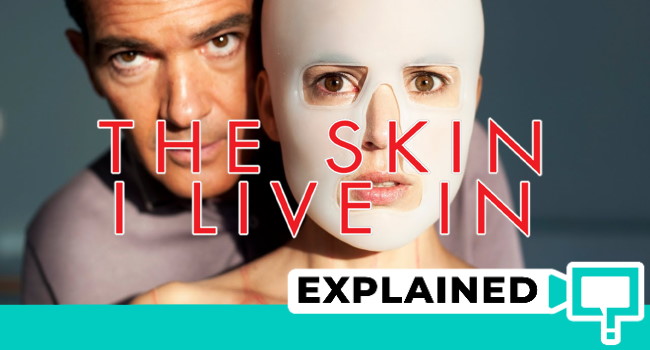 The Skin I Live In (La piel que habito) is a Spanish Psychological Thriller Drama film directed by Pedro Almodóvar. The cast includes Antonio Banderas, Elena Anaya, and Jan Cornet, to name a few. You’d have seen Elena in films like Room In Rome and Wonder Woman. The plot revolves around a mysterious woman who has been kept captive by a brilliant, yet deranged plastic surgeon. Let’s just leave it at that. Here’s the plot and ending of the film The Skin I Live In explained, spoilers ahead.

Before we begin talking about the story of The Skin I Live In or its ending, the only way the plot can work is if Robert is an absolute psychotic mad-scientist with a bizarre fetish for his wife’s body. I can’t see any other way. So let’s go through the sequence of events in chronological order, here’s an illustration for the same.

The Skin I Live In: Sequence Diagram of the Plot 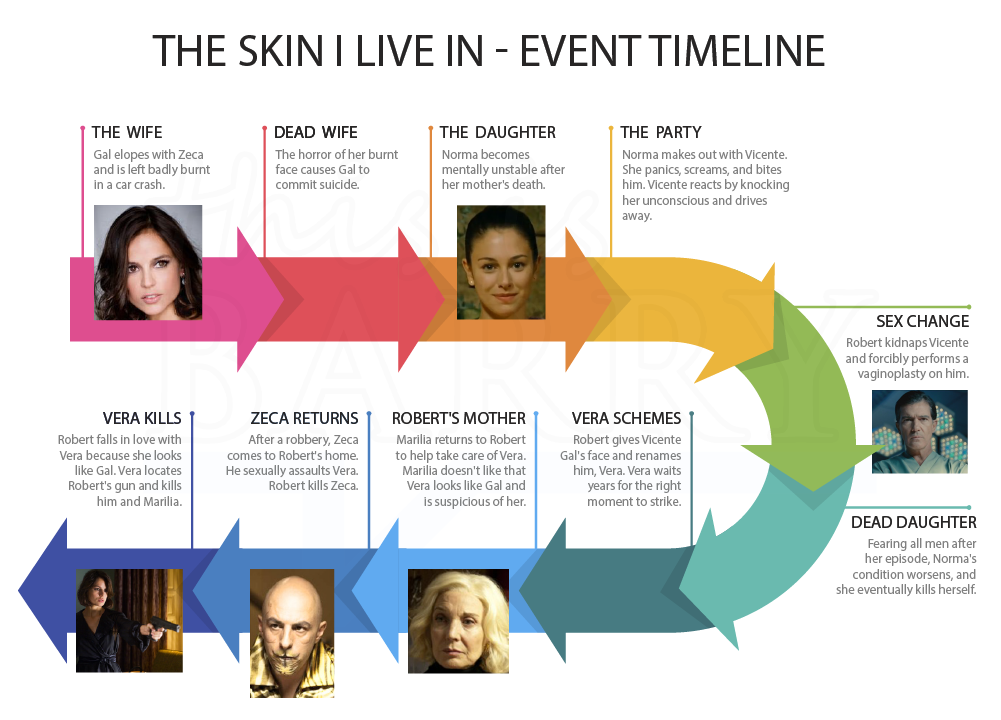 The Skin I Live In: Plot Explained

Marilia is the mother of two kids, Robert and Zeca – by two different men. Neither of them knows that they are half brothers. Zeca grows up to be a drug smuggler and a criminal in general. Robert, on the other hand, grows up to become a brilliant plastic surgeon and is an absolute psychotic mad-scientist who is madly in love with his wife, Gal.

Gal fancies Zeca and runs away with him. Too bad for her, Zeca leaves her burning after a nasty car accident. Robert tries his best to restore Gal back to her original form and takes precautions to remove all the mirrors from their home in the meanwhile. Unfortunately, Gal sees her reflection off a window and flips out. She jumps to her death as her daughter, Norma, watches on.

The Skin I Live In: Norma and Vicente, the incident

Norma becomes mentally unstable and is on multiple drugs that keep her psychosis at bay. Years later, thinking that she’s doing much better, Robert takes Norma along to a friend’s wedding party.

Vicente, a young chap who works with his mother designing clothes, consumes drugs, and lives a carefree life. He also has the hots for his co-worker, Cristina, who is gay. Popping a pill, Vicente heads off to the same party Norma happens to be. 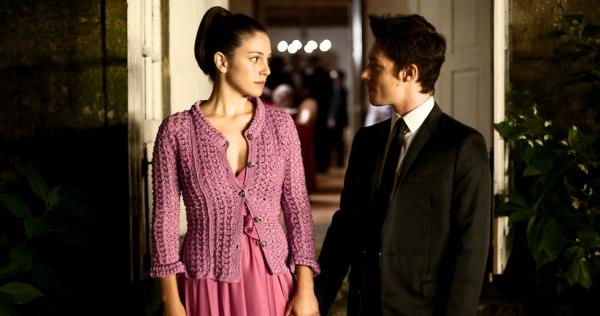 Initially, Norma and Vicente hit it off, and the two make out in the bushes. But then Norma reacts in fear and begins pushing away Vicente. She starts screaming. Fearing that he would be accused of sexual assault, Vicente tries to shut Norma’s mouth with his hands. Further, in fear, she bites his hands and Vicente strikes Norma and knocks her unconscious. High on drugs, and confused by what just transpired, Vicente puts Norma’s clothes back on her and drives away.

Robert goes to the garden looking for his daughter and notices someone on a bike driving away in a hurry. He sees Norma’s shoes and sweater that she threw willingly and assumes she’s been assaulted. To confirm his fears, he finds her lying in the bushes unconscious. Norma wakes up, confusing her father to be her assailant. She is admitted to a mental health facility where she grows worse by the day, unable to be around men.

In the quest for vengeance, Robert locates and kidnaps Vicente. With the help of falsified concent papers, he gets his colleague, Fulgencio, to perform a vaginoplasty on Vicente. Robert keeps Vicente a prisoner and further transforms him into a woman. Meanwhile, Norma’s condition worsens to the point where she commits suicide, just like her mother.

The Skin I Live In: Plot Twist: Vera is born

Years pass, and Robert gives Vicente the face of Gal and decides upon a new name, Vera. While we see Vera resigned to her fate, Vicente is still rooted within and is struggling to hold on to his identity and sanity. Robert is asked by the medical bureau to discontinue his work as it involves transgenetic therapy on humans. Intending to pursue on, Robert terminates all of his house-help, and his mother, Marilia, returns to help with Vera. Marilia knows nothing about Vicente, all she sees is a woman who is captive and looks like Gal. She simply can’t trust Vera, but she helps nevertheless.

Zeca is now a wanted fugitive and seeks shelter in Robert’s home now that his mother works there. Marilia reluctantly agrees to hide him in for a couple of days. Stupid move. Zeca lays his eyes on the live footage of Vera and sees Gal and wants to talk to her. Marilia protests, and Zeca responds by tieing and gagging her and placing her in front of the live footage. 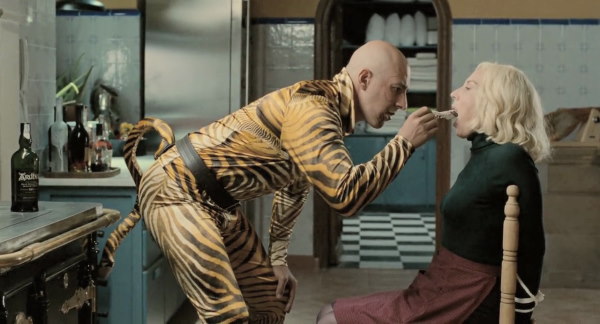 He then proceeds to locate Vera. When he does, she tries to escape but is overpowered and assaulted by Zeca. Understanding the situation, Vera tries to play along and convince Zeca to head outdoors, but it doesn’t work. Eventually, Robert shows up and kills Zeca. Marilia watches on wishing that Robert would kill both Zeca and Vera and bring this deranged medical experiment to an end.

That night Vera sleeps with Robert and wins his trust. He allows her to go shopping with Marilia the next day. Fulgencio later shows up identifying one of the missing people in the papers to be Vicente, who they once operated upon. He accuses Robert of illegally performing medical experiments on Vicente. Vera shows up just about now and to further gain the confidence of Robert lies that she has always been a woman and is in the house by her own choice. Vera notices Robert’s gun and Vicente’s picture in the paper. It appears like her wait is over. 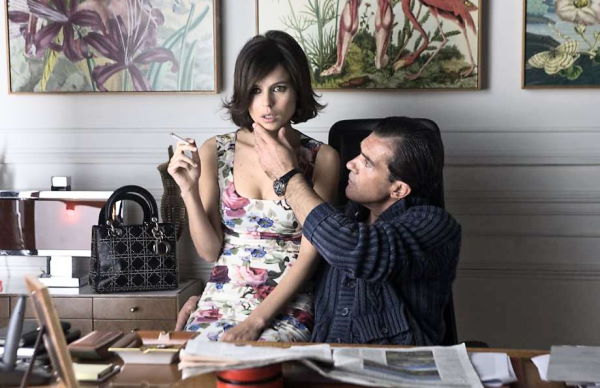 The Skin I Live In: Ending Explained

At night, in the pretext of heading down to get some lubricant, Vera takes Robert’s gun and heads up and kills him. She then hides under the bed. As expected, Marilia shows up, and Vera shoots from under the bed. As she falls to the floor, Marilia sees Vera and says, “I knew it” as this corroborates her suspicions about Vera. Vera goes back home and talks to Cristina and proves to her that (s)he is Vicente by quoting a conversation they had in private. Vera then discloses the same to the mother, and the film ends.

The Skin I Live In: Afterthoughts on the Ending

Vicente was careless and high on drugs when he met Norma. Though he’s a flirtatious man, he didn’t intend to assault Norma. The punishment he received for this was pretty extreme. Robert planned to convert the guy who attacked his daughter into a woman and then sexually assault him eventually? And in the process of the transformation, he used Gal’s face (the face of the woman who left him for another) and fell in love with the man he was trying to punish? Hmm… well, now that Robert is dead, he probably has some time before his afterlife to ponder over his scheme and where things might have gone wrong.

I don’t know if this can be called irony, but now he’s back home with Cristina, who is gay and never wanted to be with Vicente, but he’s now the beautiful Vera, and this could be a very very messed up situation. Oh, and Fulgencio will know to tell the authorities to look for a woman with Gal’s face, so Vera hasn’t really gotten away.

What were your opinions about this incredibly eccentric film? Please do share below.