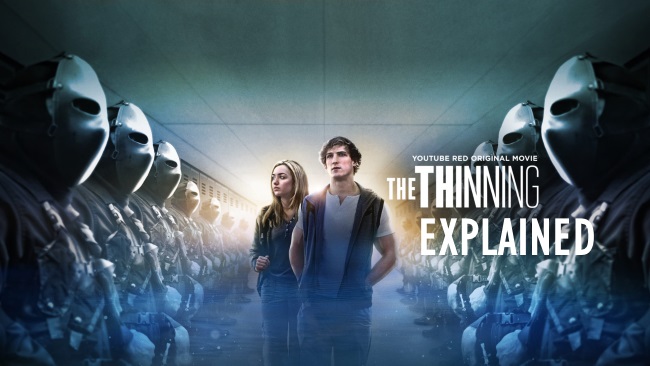 I got multiple requests to do an explanatory article for the movie The Thinning. I’m not quite sure why though. I watched it hoping for a fantastically complicated film, it was quite straightforward and predictable. I’m not going to review the film at this point. But I am going to state this. If you are going to watch the film, then be prepared for the ordinary. The film is in line with the “post-apocalyptic world” genre of films. I believe the genre is getting a little overdone. Even so, now and then, there comes a movie which surprises you. This is not one of them. Here’s the film The Thinning explained, spoilers Ahead.

What Happened to Earth?

Well, global warming. Oceans started rising. Lesser land for people to live in. Way too much population. Countries around the world had to do something about survival. Some of them opted for reasonable measures like having lesser children. Others decided that the old can be put down. In America, specifically in Texas, they decide to go with a test. This is an aptitude test, each year. The end of the test is called the Thinning. Why? Because each time the kids take this test, 5% of them are eliminated. Killed. Know how when you fail a year at school, you simply repeat it? Instead, you are killed off. This reduces the population and keeps only the smart ones. However, they are not actually killed. We’ll get to that in a bit. The Thinning is run by the head of ops – Mason King.

The story is based out of Texas, USA. The governor of Texas is the guy who’s come up with this elaborate scheme. Somehow, he has gotten the population to agree with such a fantastic schooling system. I believe the Governor has enough muscle to make this happen. The main character in the film is this guy who looks like He-Man. His name is Blake. Blake is the son of the Governor. Blake has a girlfriend. Ellie. The other character we are introduced to is Laina. She’s shown to have a younger sister and a dying mother. She needs money for her mother’s treatment. Hence she steals questions and answers from her test and sells it to people via the means of an eyepiece. Laina has a friendzoned friend called Kellan. He knows how to hack into surveillance cameras and periodically releases footage anonymously to the press, for fun.

First things first. The test is authentic but the results are not. Which means – not necessarily the ones who score badly in the test are taken for the Thinning. The rich and the powerful have their kids protected. Even if their kids do badly, another kid is randomly swapped for them. Meaning a person scoring 30% is marked Passed and a person scoring 98% is marked Failed.

The second thing, they are not killed off as part of the Thinning. They are only sedated and taken to an underground basement layer where they stay the rest of their lives and work as slaves. So effectively, the Thinning system takes the 5% population and adds them to their slave labour. Why kill people when you can get them to do free labour? In the underground, they help manufacture the very tablets on which these tests are given on.

So, the story beings with a batch of students giving the test. Blake, Ellie, Laina and Kellan are part of this batch. Ellie fails and is taken to the Thinning. Blake asks his dad to help. His dad, the Governor, refuses. Ellie is taken away and is presumed to be killed. 1 year passes. Blake plans to fail his next test. He makes a video stating that he plans to answer the questions wrongly on purpose and fail. His dad’s men get their hands on this video.

You Shall Not Fail

The test begins. Blake answers questions incorrectly on purpose. But his dad calls Mason and gets him to make a correction. Remember, the score on the test doesn’t decide pass or fail if you are the son of the rich and powerful. Blake passes. However, Laina fails. She knows for sure that she didn’t do badly in the test. Even her teacher, Kendra Birch, doubts the possibility of failing. But Laina’s taken away regardless. Kendra secretly hands Laina her key card. Laina, along with the other failed students, is taken to the Thinning. Just as they are going to inject them, Blake happens to rip out the power cables. The whole building loses power. They wait as an engineer fixes the problem.

The Truth Must Come Out

The students who have passed are all in a separate recreation room. They are held there till the power gets back. In the meanwhile, Laina escapes with the keycard. Blake and she run into each other and work together to get to the server room. Blake’s dad is out giving a speech and announces that he will be running for President. Laina and Blake navigate through ducts. Blake beats up a security personal and impersonates him. He gets to the Thinning area but gets caught.

Laina reaches the server room and with the help of Kellan is able to see surveillance footage of Mason entering the password. She’s able to login to the system and takes a picture of her score, which is 98% yet marked with a fail against it. She sends this pic to Kellan. In the recreation room, one of the kids tries to leave and the guard beats him up. Kellan records a video of this. He sends the video and the score sheet to the press anonymously. The News channel runs the news.

Blake’s dad is under lots of pressure. He takes the only call he can at this point. He asks for the pass-fail results to be corrected and set free the kids who actually scored well. Laina is released as part of this. He also asks Mason to carry out the Thinning on the ones who actually failed. Blake purposely scored badly hence he’s taken in for the Thinning. As the kids are freed and they step out, the ones marked for Thinning are given a shot of the injection. We are made to believe that they are dead. Blake’s dad is giving a speech about how his son has also perished along with the others who failed the test. We’re taken back to the Thinning where it is revealed that the kids were only tranquilized. They are taken to the underground level. Here we see all the previous kids who were part of the Thinning. Blake gains consciousness. He notices that one of the workers there in Ellie. The film ends.