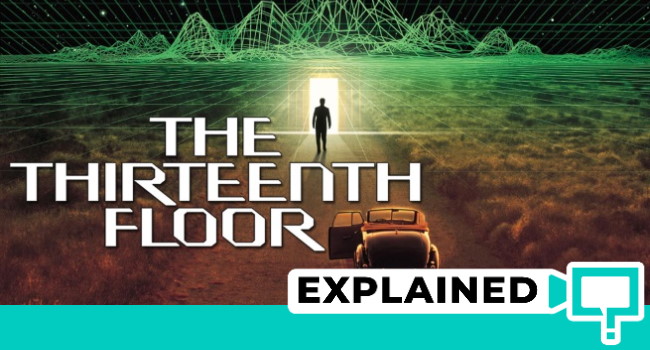 The Thirteenth Floor released along with eXistenZ in the same year – 1999. Both were good movies, The Thirteenth Floor was better in many ways. They share a pretty similar concept, a world within another world. What also happened was that they both shared a similar concept with another movie which too released in the same year of 1999 – The Matrix. Both movies got crushed into inexistence by The Matrix. Had they released in the year prior, either movies would have seen the light of day. Unfortunately they got lost in the shadow of The Matrix, it was hard not to.

The Thirteenth Floor was directed by Josef Rusnak who hasn’t really made too many successful movies, this one could have been his big hit but… too bad. It stars Craig Bierko (From Scary Movie 4), Armin Mueller-Stahl (from The Game) and Gretchen Mol (you’d have seen her in a small role in Donnie Brasco).

Here is the layer cake of the worlds. The real world has many simulated worlds, thousands. The simulated worlds are used for some purpose, mostly experimental I’d imagine, they don’t really explain why thousands of simulated worlds exist. Let’s ignore that for now. One of the thousand such worlds is the one the movie is about, the one that we are interested in.

The visual of the layer cake: 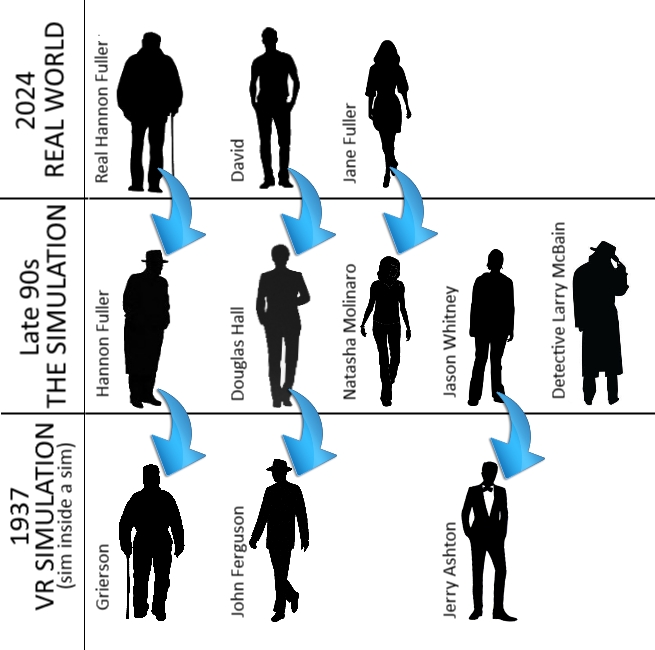 Not many details are disclosed about the real world. David from this world used to be a nice guy and progressively became evil. He starts using the simulations to live out his dark fantasies. He enjoys killing people in the simulations. Sort of like how people go on a rampage while playing the game GTA. Jane becomes increasingly detached from David and his psychotic behaviour. She however starts falling in love with David’s download link – Douglas Hall.

Douglas Hall is David’s download link. Jane observes Douglas’s personality in the simulation and begins to fall in love with him. The real Hannon Fuller is Jane’s father in the real world.

David from the real world notices that Hannon (from the late 90s simulation) has found out that the simulation world is, well, a simulation. Suspecting that Hannon would do something about it, David downloads into Douglas and kills Hannon by repeatedly stabbing him. This is the scene we see outside the bar but we are not shown that it is Douglas/David. The bar keeper sees Hannon leave but doesn’t know who’s killed him.

Douglas has been suffering from memory losses. This is because David has been “Jacking into” him to do his own thing. The bloody shirt and stains are a result of David downloading into Douglas and killing Hannon. Detective Larry McBain is investigating the case and suggests to Douglas that the clues point to him as the main suspect. 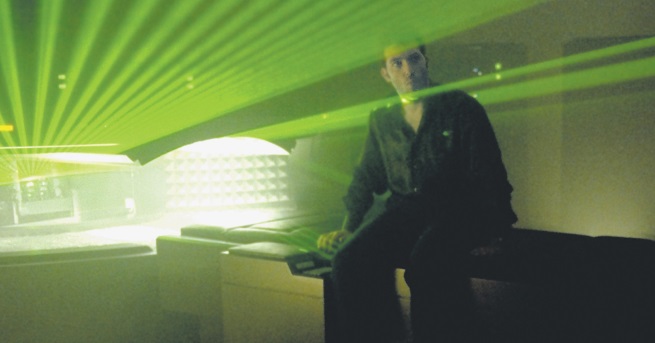 The movie opens with this. Hannon has been downloading into Grierson and living his fantasy of being a rich guy in 1937 and indulging in young girls. The secret note that Hannon leaves for Douglas is by downloading into Grierson, writing the note that explains that Douglas’ world is not real and leaving this note with Ashton the bartender. However, Ashton opens the note and reads it.

The note instructs the reader to drive in a direction that he would usually not, not stop for any sign boards mentioning end of road or otherwise. This will take the person to the end of the simulation. This would let the person know that his world was not real. While all this was intended for Douglas, Ashton ends up doing this and figures that his world (the VR simulation of 1937) is not real.

When Douglas downloads into John Ferguson and comes to ask the bartender (Ashton) if he has any message for a Douglas, Ashton lies and doesn’t mention the note. Soon after this, Douglas’ download linkage is terminated as the timer runs out.

The plan is for David (in Douglas) to kill Hannon, Jane (in Natasha) to come in as Hannon’s daughter and close down the company. The VR Simulation (1937) which Hannon has created is also dangerous as it’s not expected for a simulation world to create another simulation world inside it. However, Hannon changes his will to make Douglas the heir to the firm making it difficult for Jane (in Natasha) to assume control of the company. Meanwhile, detective Larry McBain is closing in on Douglas as all the clues point towards him as the murderer of Hannon (after all, he did murder Hannon, just that David did it). Because of all the memory losses Douglas begins to suspect himself too.

Douglas and Jane (in Natasha) spend some time together and it appears that they start falling in love. The bartender who sees Hannon leave swings by to blackmail Douglas, he has no proof but thinks he could give it a shot. The bartender gets his face smashed into a car window by Douglas instead. The bartender later is found dead. This murder is also performed by David downloading into Douglas. Douglas is arrested because of this but Jane (in Natasha) gives him an alibi and gets him out.

Douglas goes back into the VR Simulation (1937) into Ferguson and this time meets Grierson. Grierson finds a fancy suit of his size hidden away. He admits to having recollection of dreams with young girls. He even mentions that he could smell the perfume of the girls when he woke and that his wife suspects him of cheating. The reason is because these aren’t dreams or fantasies, this is because Hannon has been using Grierson to indulge with girls. Douglas (in Ferguson) takes Grierson to the club. After trying really hard, Grierson remembers handing a note to the bartender Ashton. Douglas (in Ferguson) chases down Ashton. Ashton admits to reading the note and finding out that his world is not real. Ashton also mentions how he’s noticed Douglas and Ferguson switching characters. Ashton and Douglas (in Ferguson) get into a fight and Ashton gets the upper hand almost drowning Douglas (in Ferguson). Douglas, in the world above, is woken up by Whitney and tells him that the timer was never set and this could have been very dangerous.

Detective Mc Bain finds out that there is no daughter that Hannon had. Jane was a fake. Douglas tracks down Jane but instead finds a Natasha Molinaro who looks like Jane but is a supermarket clerk. Douglas notices how Natasha has no recollection of meeting him. This along with the note makes Douglas try an experiment. He drives as instructed in the note and is shocked to find that his world too (late 90s) is merely a simulation.

Jane again downloads into Natasha and meets Douglas and explains to him how he is the download link of David from the real world and that David is her husband in the real world. She also explains to Douglas how she’s observed him for a long time and has fallen in love with Douglas even though he is a simulation. She tells Douglas that David has downloaded into him and killed Hannon. Douglas’ world (late 90s) is special because it is the only simulation world which has created another simulation (1937) within it.

Meanwhile, Whitney enters the VR simulation (1937) to satisfy his curiosity. He downloads into Ashton just as Ashton is driving away with Ferguson in his trunk. Presumably, after the swimming pool fight, Douglas “leaves” Ferguson, Ashton realizes that and ties up Ferguson, dumps him in his car and drives on. Whitney (in Ashton) loses control of the car and is stopped by a cop, the cop also finds Ferguson tied up in the car. In a freak accident, Whitney (in Ashton) gets hit by a car and killed.

How does Ashton come out of his world? How does Whitney become Ashton?