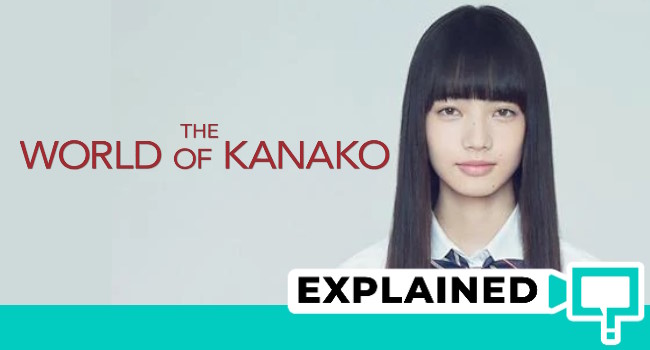 This is a Japanese film brought to you by Tetsuya Nakashima, the maker of the movie Confessions. The film is a non-linear story told about an estranged father searching for his missing daughter – Kanako. The more he searches, the more he discovers about her. It’s quite a twisted tale and is a good watch. Here’s the explanation of the plot and ending of the film The World Of Kanako, spoilers ahead.

I’m going to run through the story in a linear format. It just helps in explaining things better.

Kanako is a girl who grows up in a broken family. Her father, Akikazu Fujishima, is an alcoholic and is a terrible father. The mother, Kiriko Fujishima, is no good either. She’s shown to be an absent mother. A specific moment is shown to turn Kanako to the evil side. Akikazu is an abusive father and busts into her room drunk and assaults her. This turns to a vague sexual retort from Kanako. Perhaps this is not the first time, perhaps he has abused her before and Kanako has just learn to live with this by reacting the way she does. Obviously, Kanako grows up to become a crazy young girl. She grows up to be someone who draws on weaknesses of people and uses that to ruin their lives. Yeah, she’s an evil bitch, like that. 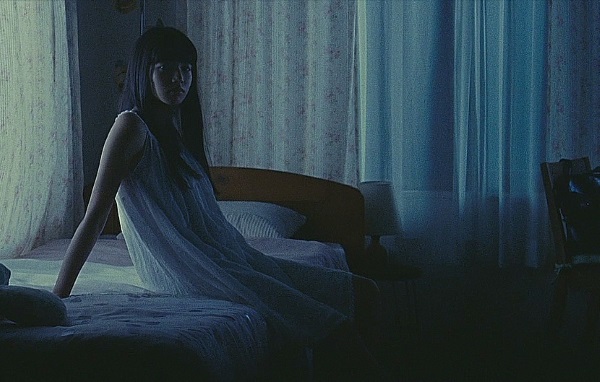 Years pass, Akikazu and Kiriko are separated. Neither parents know what is happening in Kanako’s life. Akikazu catches Kiriko making out with some old guy in a car and rams into the car to teach them a lesson.

Kanako’s first boyfriend is Ogata. A bullied soul. Ogata commits suicide. Ogata is disclosed to be bullied by the Matsunaga gang. Why? Because he was small, cute and defenseless and they loved to pick on the weak. They don’t mention the unspeakable things that happen to Ogata but the indication is that they got him drugged and handed over to the prostitution ring (there is a photograph). Ogata could not live with what happens to him and eventually kills himself. Is Kanako responsible for this? Well, perhaps. She is indifferent to the weak. Matsunaga himself has a thing for Kanako. So while she may have not plotted against Ogata, she doesn’t do anything to stop it either.

Kanako goes on to further get involved in the prostitution ring. She convinces other students from her school to get involved and make some money. Kanako indulges with some old men too. She also collects multiple evidence against the prostitution ring. She joins hands with Matsunaga in blackmailing the old perverts. The Yakuza don’t like this. It is bad for their business.

In comes the narrator. He is a boy who is a weakling and is constantly bullied at school by a small gang of bullies. Kanako meets him. He falls in love with her at first sight. She shows interest in him too. Kanako spends some time with him and he takes this to be a sign of love. He understands that Kanako once had a boyfriend called Ogata who eventually committed suicide. He mentions to Kanako that he wants to disappear with her someplace else. Kanako asks if he too wants to be like Ogata and get to know her more. Little does the narrator know what he’s getting into.

The narrator happens to win one of the swimming competitions and is suddenly thrown into fame. Kanako tells Matsunaga to take care of the gang of bullies who are after the narrator. The leader of the gang is beaten to a pulp. The narrator is free of being bullied. He is madly falling in love with Kanako.

Kanako Messes Him Up Good

She gets the narrator to come to a party where he gets drunk and is eventually caught and handed to the prostitution ring. He gets physically abused. Kanako has lived up to her word of making the narrator “become” like Ogata. Furthermore, he is caught and beaten up and thrown into a river. The narrator is now pissed and wants vengeance so he follows a girl from the gang that throws him into the river. He tortures her to get Kanako’s location and goes after her. On meeting Kanako he is unable to kill her as he is still in love with her. The narrator gets killed by a person in the shadows. This was always Kanako’s plan. The killer is most likely Matsunaga.

Akiko and the death of Kanako

One of the girls, Akiko, that Kanako has fed to the prostitution ring is the daughter of a teacher. Kanako meets the teacher and shows her a picture of Akiko in bed with some old guy. The teacher loses her mind and asks Kanako why she would do that to a young girl. Kanako explains how Akiko was never forced or compelled and that she actually enjoys it. The teacher, in a fit of rage, stabs and kills Kanako. This is how she dies, in the car. Not the Yakuza, not Matsunaga’s gang, not the narrator. The teacher stabs and kills Kanako and then buries her body in a secure location.

The start of the movie shows Akikazu, retired police lieutenant, searching for his daughter. The case is also being handled by Detective Asai – the smug guy with a lollipop. He has his own vested interest in this prostitution ring and wants to keep it under the covers. While he doesn’t stop Akikazu from looking for Kanako, he doesn’t help in any which way.

Akikazu talks to two of of Kanako’s classmates Emi Morishita and Tomoko Nagano. They don’t give him much information. Akikazu smells a rat and later assaults Emi Morishita to get information. Emi escapes but tells Akikazu that Kanako is the devil and got Nagano into the prostitution ring. Later, Nagano tries to go to the cops about the prostitution ring but there are senior cops involved in this. The department orders a detective by the name Aikawa to kill Nagano and she is killed.

Emi meets Akikazu after this and hands him a locker key saying there is information in there that he will be interested in, that it is Kanako’s locker keys. Emi does this because she knows Nagano went to the cops and died right after. She doesn’t want the same fate and hands what she knows to the ex-cop Akikazu.

Akikazu opens the locker to find photo evidence that Kanako has been collecting. In the photo Akikazu identifies the senior cop that is involved in this. In the photos there is Kanako too. Akikazu assaults the senior cop into giving up more information on the prostitution ring and learns more on how his daughter has become evil and has been helping old men get to young school girls.

Akikazu gets abducted by the Yakuza who are looking for Kanako as she and Matsunaga have been causing a lot of grief thanks to the blackmailing. They show Matsunaga who is kept in a body bag, sliced up and alive.

On realizing that Akikazu wants Kanako dead too, the Yakuza give him the name of the person who kills Nagano – detective Aikawa. Akikazu busts into Aikawa’s home and physically abuses his wife and calls him for a meeting. The two of them meet. It turns into a bloodbath. It becomes a massive confusion with detective Asai showing up too. Akikazu leaves them wounded and escapes. 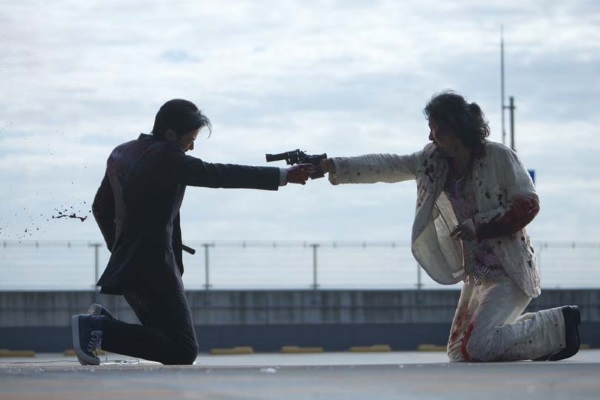 Akikazu notices a picture of Akiko, the teacher’s daughter. He goes and confronts the teacher about this. She confesses that she has killed Kanako and has buried her someplace. Akikazu is crazed with rage by now. He wants Kanako alive so he can kill her for the trouble she has gone around causing. Yes, he is not upset that the teacher has murdered his daughter, he’s only upset because he wanted to do it himself and she has taken away that opportunity from him. He forces the teacher to dig Kanako up but she has no memory of where she has buried her. The movie ends as the two of them look endlessly.