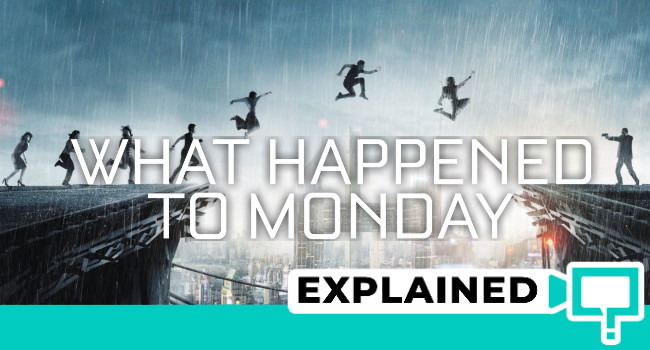 What Happened To Monday: Plot Explained

As always, let’s do this linearly. In the not-so-distant future, the population of the Earth has multiplied many folds. There is a massive shortage of resources of all kinds. The world opts for genetically modified crops which get fast-tracked around the globe. But this leads to a staggering spike in multiple births across the world. The solution is now feeding the problem. No one knows what to do.

Political activist and renowned conservation biologist Dr. Nicolette Cayman has prompted the Federation to institute a “one child per family” policy. All citizens are required to wear a Bureau-issued identity bracelet. All siblings, born thereafter, are remanded to Bureau-enforced cryosleep.

What Happened To Monday: Nicolette’s Scheme

The picture Nicolette paints is that these children who are put into cryosleep will be woken up when the crisis the world is going through is handled. That these children will awaken in a better world. The present world will deal with their shortage issues by means of their reduced population. The picture that Nicolette paints is a lie. The sibling children are not put into cryosleep. They are put to sleep and then burnt to ashes. There is no preservation of children. They are simply killed off. The way she sees it is that there is no room for more people on the planet. All “additional” children need to be removed. Putting them into cryosleep will need power and more resources to keep them all alive. So they are all killed off. Obviously, no one knows this but Nicolette and a few people working closely with her.

Terrence Settman (Willem Dafoe) is one such person whose daughter Karen Settman has Septuplets, thanks to the genetically modified food. Karen dies. Terrence doesn’t announce the 7 siblings to the authorities. He names them each by one day of the week. He decides that all 7 of them will live in secrecy in a place that has hidden areas (which he builds). He trains them all to take on the identity of Karen Settman. Each of them gets one day of the week to go out and be Karen. They grow up sharing the identity of Karen. When each of them comes back home, they explain to the others how their day was. This step is important as it allows the next girl to go out and continue being Karen.

One day when they are young, Thursday decides to sneak out and skate. She ends up falling pretty bad and gets her index finger cut off. Since all of the girls need to look the same, Terrence cuts the index fingers off all the other girls starting from Monday.

Time passes, they grow up. Terrence passes away. The girls have their own identity but are, on each of their days of the week, living the life of a Karen Settman. Karen has a big opportunity for a promotion coming up. These are the seven girls. 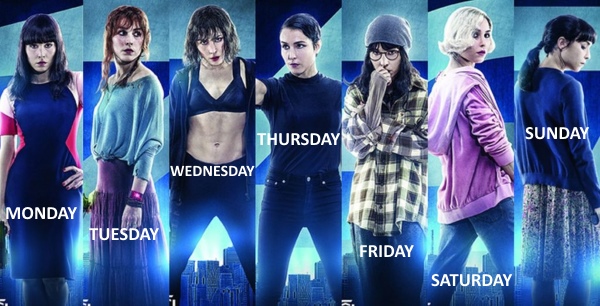 Over time, Monday has become quite content with being Karen in the external world as well as inside home. The others are very different and force themselves to live as Karen on their day out. Monday has also has met and fallen in love with Adrian Knowles, a security guard, who works for the Bureau. She doesn’t tell the others about her relationship and keeps it a secret. We are shown a moment when Adrian flirts with Monday at a check post.

What Happened To Monday: Pregnancy

Monday becomes pregnant with Adrian’s children. Unfortunately, twins. Which means one of her children will be taken away. Also, her pregnancy will mean that their cover as Karen will be blown. For the sake of her children, she makes a deal with Nicolette. She secretly compromises the knowledge and location of her six sisters in return for her to be free and live her life normally as Karen. Monday siphons millions of the bank’s Euros into Nicolette’s campaign account. Nicolette has been keeping the whole one child thing on a tight leash. People finding out about seven kids making it all these years will ruin things for her. So she agrees to let Monday live free as Karen once the remaining sisters are sleeping with the fishes.

Jerry is a guy in the office who is also eyeing for the promotion. Jerry doesn’t know anything about Karen’s identity as one of seven people. All he knows is that Karen has a contract with Nicolette. He doesn’t know any other detail. He uses that to try and blackmail Monday to get the promotion. Jerry has nothing on the sisters. He’s just an idiot in the middle of chaos and is bound to die because of his ignorance.

On the day of the promotion, Monday doesn’t return back home. As a result, the rest of the sisters freak out and assume something happened to Monday. Next day, Tuesday heads out to work and tries to act normal. She finds out that Monday has had a fight with Jerry. The sisters think that Jerry is the reason they have been exposed. Tuesday is taken in by the authority. They don’t kill her. They keep her alive. They pluck her eye out though. They use the eye to go get the rest of the siblings.

A team is sent to the house. They locate them but the sisters are able to overpower Nicolette’s squad. But Sunday gets shot, she dies. They also notice an eyeball that the squad has with them, it’s Tuesday’s. They assume she’s dead too. The next day Wednesday heads out to find out more. She doesn’t go out as Karen, she goes out dressed as herself. She goes to Jerry’s place to confront him. He tells her about the contract and as expected, he gets sniped. Headshot by Nicolette’s men who are following Wednesday.

Wednesday on the run

Wednesday makes a run for it as they come to get her. The sisters advise Wednesday to jump out the window because there is a dumpster that will soften her landing. And so she jumps off 3 floors … into an empty, metallic dumpster. And survives. Survives enough to continue running at full speed. The other siblings give a sheepish grin. Apparently, gravity and height are best ignored in case of goof-ups like these.

Just then, Adrian shows up at their door. He’s there to meet Monday. Saturday goes to open the door while the rest hide. Adrian flirts with Saturday (thinking she’s Monday). She asks for a time-out and goes in to meet with her sisters. They are confused as to who this dude and which one amongst them has been seeing him. Friday gives Saturday a bracelet that can pair with Adrian’s when they are at his place. This way they can get access to the Bureau’s servers. Saturday leaves home with Adrian to his place.

The remaining sisters (Thursday and Friday) guide Wednesday to a roof to make a fantastic leaping jump… only to be shot in mid-air in the chest. She’s then shot in the head and falls to her death (metallic dumpster or not). Wednesday is dead.

Saturday manages to pair her device with Adrian’s. Friday gains access to the Bureau’s network. She finds out more about the million dollar transaction from Karen to Nicolette. They go through surveillance footage to find Tuesday in a cell. But they think it is Monday who is held hostage. Saturday also finds out from the conversation that Adrian has been seeing Monday. Adrian leaves for work. Soon after, Nicolette’s men come in and kill Saturday.

Thursday and Friday get attacked. Friday syncs all their data to Thursday’s device. After this, she blows up their apartment killing the assailants and herself. Adrian gets to the sister’s house as he hears activity happening there on his radio. He goes up to find a dead Friday being taken out. He thinks it is Monday. He gets back to his car in disbelief.

What Happened To Monday: Recap

Thursday assaults Adrian asking why he sold them out. Soon she realizes that Adrian is actually in love with Monday and he knows nothing about them being siblings. Thursday explains to Adrian that Monday is still alive but captive. He helps Thursday sneak into the Bureau.

Inside the Bureau, Thursday witnesses a young girl being burnt to ash under the pretext of putting her into cryosleep. She secretly records it on her hand device.

She locates Tuesday. She looks at her missing eye and realizes that it’s not Monday. Thursday takes Tuesday’s wig and works herself to look like Karen. In the meanwhile, Monday is signing her deal with Nicolette. Tuesday takes the recording and heads to the server room with the help of Adrian.

What Happened To Monday: Ending Explained

Monday confronts Thursday. Thursday (and the audience) finally realizes that it was Monday who sold them out. Monday says she fell in love with Adrian and everything changed. Monday tells her that she was the first born and has the right to be Karen all by herself. She has worked hardest to be Karen. They two of them begin to fight. Thursday shoots Monday.

The Truth Is Revealed

Meanwhile, Adrian and Tuesday are able to get to the server and play the video of the girl being burnt to ashes. Nicolette is giving her speech. The video comes on and everyone now knows that there are no children in cryosleep. Monday comes back wounded with a gun. She gets shot by an agent. Nicolette is devastated. She leaves. Monday is dying and finally announces that she’s pregnant. She dies. Somehow, in the middle of all that chaos, Monday’s children are saved and taken in to an artificial womb.

Victory, now the world can end!

Nicolette is arrested. The one-child policy is removed. Captive children are released. Is it a happy ending for the humans? Hell no. There are now too many humans on the planet. Lack of food and resources will lead to their doom. Nicolette was technically saving the human race but she was doing it through lies and deceit.

Tuesday renames herself Terry. Thursday takes on the name Karen. Monday’s twins are safely held in an artificial incubation unit. They will eventually be born into the world of dying humans. What Happened To Monday ends with a strange sense of victory over evil. However, the reality is … humans have doomed themselves.