Episode 3 from the Netflix series Love, Death And Robots is called The Witness. It’s the bizarre story of a woman who witnesses a murder across the road and is fleeing to save herself. Any more would spill spoilers. Here’s Episode 3 of Love Death and Robots: The Witness’ ending explained.

A sex worker is getting ready to get to work and hears a struggle from across the road. She sees a man with a gun covered in blood. The man looks down to see that the woman he has killed is the same person who is currently looking at him from across the road. The woman makes a run for it, the man follows her trying to talk it out. We’re shown that they’re in an unreal version of Hong Kong, the city seems futuristic, but the cabs look like the ones from today. Also, there’s hardly anybody around on the streets.

They end up in her sex club where the chase continues. She grabs her boss’ gun and runs out. Eventually, she runs back to the very same street she started from and just happens to enter the building that was across from her room in the first scene. She also coincidentally enters the one unlocked apartment (the man’s). The man returns home to find the woman pointing a gun at him. They both struggle. The woman shoots the man dead. Across the road, she sees another version of the man looking at her standing with a gun covered in blood.

While it is clear that the man and the woman are interlocked in a never ending loop where they each kill the other, we aren’t told why this is happening. Unfortunately, we have to resort only to theories.

Like the movie Triangle, the man and the woman are made to go through this death loop repeatedly as a punishment for something that they did when they were alive. Maybe they got away with murder, maybe they were an accomplice to murder, maybe there were indifferent to a crime that happened across the street that they didn’t bother reporting. Whatever it was, they are now in hell living through this never-ending saga.

Let’s consider that some cosmic freak event has caused many planes of realities to align with each other on either side of the street. The event on one side of the road is kicking starting another on the opposite side. The man murdering the woman (universe 1) kick-starts the same woman on the other side to run for it (universe 2). When she returns to the apartment at the end, she has entered a new universe (universe 3, because the house she comes to doesn’t have the dead woman the man killed in the first scene). The man follows her and gets killed. This triggers off the man from yet another universe (universe 4) to make a run for it. Like the movie Coherence, the two of them are caught in a multi-dimensional situation. 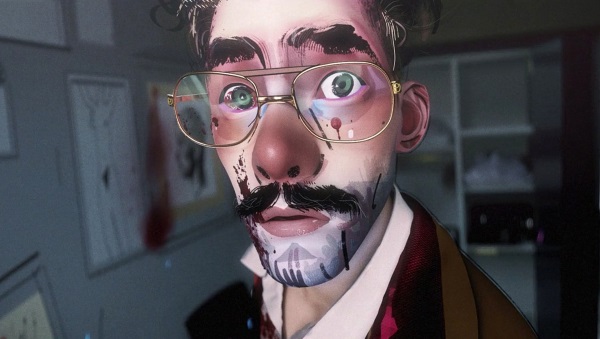 If we consider this event to be just a metaphorical representation, then we could say that the man and the woman are in a toxic relationship. A relationship that they are caught in and not able to break away from. A relationship that causes them both incredible amounts of pain time and again. They go through each day wanting to run away from one another but somehow keep getting back, hurt each other, only to want to run away all over again (like say, Colossal)

I’d love to hear more theories, so please do drop in a line in the comments section.