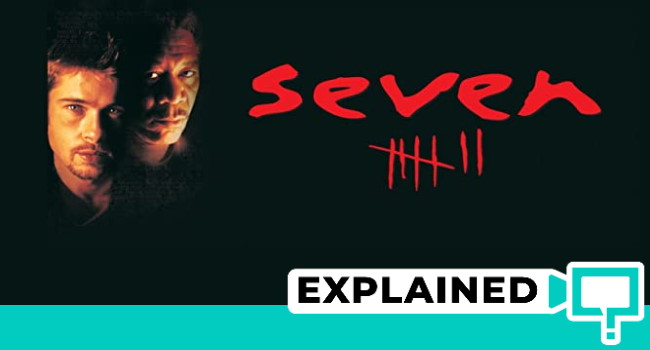 Se7en or Seven is a 1995 Psychological Thriller, Crime Drama directed by David Fincher. The film’s leading cast includes Brad Pitt, Morgan Freeman, Kevin Spacey and Gwyneth Paltrow. The plot is centered around an investigation of a series of murders symbolising the ‘Seven Deadly Sins’ as mentioned in the epics’ The Canterbury Tales’, ‘Paradise Lost’, and ‘Saint Thomas Aquinas’. This article is written by Anubhav Chakraborty and you can follow him on his Instagram. Here’s a detailed plot analysis and ending of the film Se7en explained, spoilers ahead.

You can rent or buy Seven by clicking below:

Se7en/Seven: The Meaning of the Movie Title

The number 7 has been used repeatedly to address various elements of the movie. Here are a few instances where the number 7 was used.

Detective David Mills is the new detective appointed to replace Detective Lt. William Somerset. Being sick of the deteriorating conditions of the city’s crime, Somerset has decided to retire from his position. A new serial killer emerges, and Somerset is stuck working on the case for 7 more days. The killer symbolizes the murders as a punishment for the commitment of a deadly sin. He wants to set an example for the people who commit these sins in their everyday life without realising its consequences.

As each murder symbolises a sin, we should discuss the sins and the sinners to better understand what goes on in the movie.

Gluttony is an inordinate desire to consume more than that which one requires. Its punishment in hell is to be forced to eat rats, toads, and snakes. Well, we can all agree that spaghetti is nothing like rats or toads, but John Doe made sure that the sinner experiences hell. The extremely obese victim was found dead in his apartment with his hands and legs tied, sitting on his own piss and shit with his face in a bowl of spaghetti. The autopsy doctor mentioned that something caused an internal hemorrhage in his stomach when he was alive and that he died when his stomach burst due to it. In a later scene, we see the captain come into Somerset’s office to hand him over pieces of plastic found in the victim’s stomach. Following the evidence, Somerset goes to the victim’s house and discovers that the bits were chipped off from the floor when someone dragged the refrigerator. So he does the same and finds “GLUTTONY” written behind it with a message by the killer quoting the epic ‘Paradise Lost’, “Long is the way and hard, that out of hell leads up to light”. Somerset gets the hint that this murder would follow many more.

Greed is the desire for material wealth or gain, ignoring the realm of the spiritual. Its punishment in hell is to be boiled in the most luxurious, most expensive oil in the universe. But maybe John was on a budget, so he decided to improvise and ask Eli Gould, the high profile district attorney, to cut from himself exactly a pound of flesh. He even leaves a message quoting Shakespeare’s Merchant of Venice, “One pound of flesh no more no less no cartilage no bone but only flesh”. Here the mention of flesh suggests vengeful, bloodthirstiness, and inflexible behavior to get back borrowed money.

Just before the last scene of the movie, we see John ranting about how he killed people who weren’t innocent. He believed that Eli Gould made all his money by lying and defending murderers and rapists, so he made him pay it back with a ‘pound of flesh’.

John leaves a clue in the Eli Gould crime scene, highlighting Gould’s wife’s eyes with blood on her photograph. After much thought and investigation, the detectives decide to question Mrs. Gould in the safe house she was kept in. They show her pictures of the crime scene and ask her if she could notice anything suspicious in the photographs. After going through most of them, she sees that the painting in the office is hung upside down. The detectives rush to Eli Gould’s office and find the words “HELP ME” written in fingerprints, behind the painting. The following morning they get a fingerprint match of Victor (Theodore Allen). Victor had a long history of mental illness. Although having received a strict southern baptist upbringing, Victor had dabbled in drugs, armed robbery, and assault. He was sent to prison for attempted rape of a minor. Eli Gould represented him in court for this case. The captain and other officers were sure that they had found their killer, but Mills and Somerset don’t agree, they think the killer has more purpose.

Few officers rush to Victor’s apartment with a SWAT team only to discover Victor’s (almost) dead body tied to his bed with his left hand chopped off (now we know where the fingerprints came from). Victor was tethered to his bed for a whole year. John took the time and patience to hide Victor’s existence by paying his rent regularly, every month, on time, ‘A landlord’s dream’ as quoted by Detective Mills.

This was a representation of another deadly sin, Sloth: the avoidance of physical or spiritual work. Victor was in no condition to give a statement about what happened to him and who did it. His whole body had started to decay, and he had chewed off his own tongue. By this time, we realise that John has planned this well for years, leaving no fingerprints or loose ends, but the purpose is still unknown.

Pride is excessive belief in one’s own abilities, that interferes with the individual’s recognition of the grace of God. It has been called the sin from which all others arise.

John made things interesting this time. He gave the victim a choice. A choice that would make her give up her pride in being beautiful. One of the woman’s hands was glued to a box of sleeping pills, and the other was glued to a telephone. The choice was to either call for help and be disfigured or to consume the sleeping pills and commit suicide. The woman gave up her pride and decided to call for help and get her face disfigured. John cut her nose, cut her face, and killed her anyway.

What is John Doe? Its anyone, maybe no one, but John Doe in this story was really someone. He was a ghost to the system. His home was filled with weird shit. He had a room full of journals full of texts that may not make sense to an average person. We see a glimpse of his journaling in the opening credits of the movie. We also see him chipping off his fingertips with a blade. That’s how none of the crime scenes and his apartment had his fingerprints. He had no employment records, and his bank account was only a few years old. The only thing they could figure out was that he was highly educated, independently wealthy, and absolutely crazy.

John Doe was disgusted by the sins people committed in their lives and thought he was serving God by punishing the sinful. He was patient, highly organised, and always miles ahead of the police department. Despite everything, John lacked a regular life, and he became envious of Detective Mills for having one. Forget the torture, pain, and abuse he caused to the victims; John thought he was sinful because he envied Mills’ life. 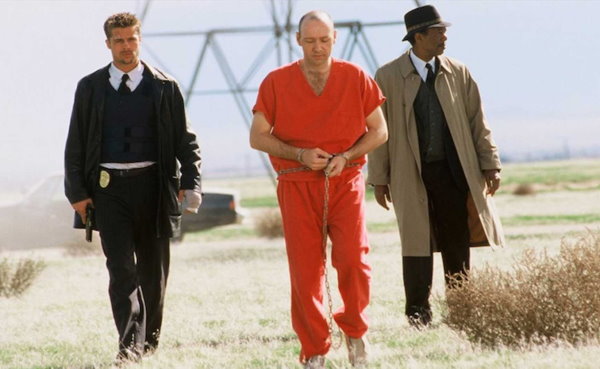 After taking Mills and Somerset in the middle of nowhere, Somerset receives a parcel for Mills. On opening the box, Somerset realises that John has the upper hand. He asks his backup to fall back and screams to David to drop his weapon. John reveals to Mills that the parcel contains his dead wife’s head. John tells him that he was envious of Mills’ life and wants Mills to punish him as he was sinful, doing which he would make Mills commit the deadly sin of wrath.

Wrath is anger. It is manifested in the individual who spurns love and opts instead for fury. John emotionally manipulates Mills by telling him that his wife begged to spare her life and that she was carrying their baby in her womb. Mills had no idea about the baby, and the pain he experiences becomes unbearable for him. After hesitating for a long time, he isn’t able to control his anger and shoots John multiple times, completing John’s mission.

This isn’t the first time we see Mills’ portrayal of anger in the movie. The photographer scene, the chase of John Doe, breaking the door to John’s house, were all instances hinting his association with wrath.

What is wrong with the city in Se7en/Seven?

The city has had a history of mental illness in the majority of its population. People commit horrific crimes that have no purpose. It is safe to say that the city symbolizes hell and that John Doe is a symbolization of Satan. Doe thinks he is the chosen one and that it is his duty to punish those you have sinned. It is a matter of debate whether Satan is actually God’s worker as he HAS to punish the sinners, but there is no real evidence regarding this topic except a mention in the ‘Olney Hymns’

Satan, who now tries to please you,
Lest you timely warning take,
When that word is past, will seize you,
Plunge you in the burning lake:
Think, poor sinner,
Thy eternal all’s at stake!

John walks in the precinct covered in blood, surrenders to the police, and demands to speak to his lawyer. After having a conversation with John, the lawyer lays down John’s demands in front of the police department. He reveals that there are two more bodies and that John will lead the detectives to them, but only the detectives can come with him. If his demands are met, he’ll give a full confession, and if not, he’ll plead insane in the court. The detectives agree, and John takes them in the middle of a deserted area in the outskirts of the city. A delivery agent reaches the location and hands out a parcel he has no idea about. Somerset receives the package, and the delivery agent tells him that he was paid $500 to deliver it there to Detective David Mills. Somerset opens the box to find Tracy’s head in it. He realises John’s master plan and asks his backup to move back as John has the upper hand.

In the meantime, John reveals to Mills that the parcel contains his pregnant wife’s head, who he killed out of envy from David’s normal life. He manipulates David and asks to kill him and become wrath. Somerset continuously asks David to drop his weapon and tells him that killing John will only serve his purpose. David, not being able to control his pain and anger, shoots John multiple times. The police force arrives, and they put David at the back of the car. David seems devastated. The captain ensures Somerset that he’ll take care of David. Somerset continues to stay in the city.