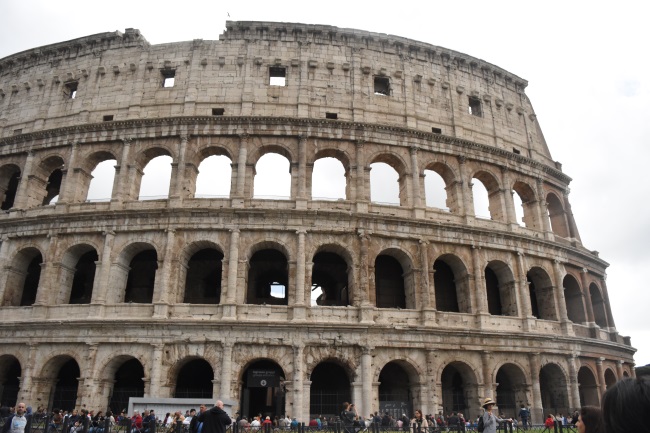 Let me start with the obvious. Rome needs time. There is lots to see. Keep 3 full days at the minimum. We fell short of time. Here’s what you can do in Rome in two and a half days. 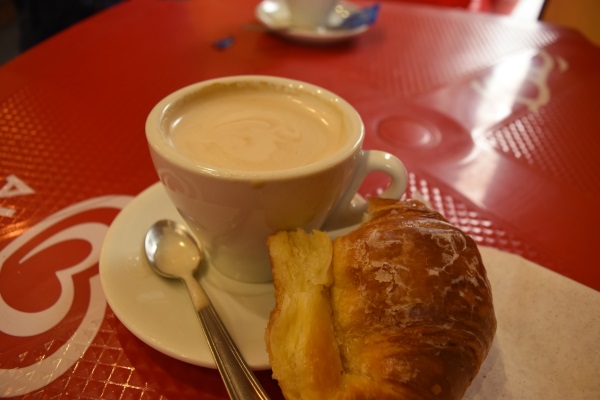 We had only half of this day as we had flown into Rome that day. We headed towards our first ever AirBnB booking using the bus and the metro. We stayed in an area called Mirti which is on line C of the Metro. It was a little far out but a good neighbourhood. We need to use maps to get to their place. Plenty of shops nearby. The house was small but beautiful and our hosts were warm and friendly. There was a bar next door and bars in Italy operate as breakfast places in the morning.

We were very tired and decided to just catch dinner and drinks nearby. We headed to a restaurant by the name Angolo Romano. This was the first time we were going to taste pizza and pasta in Italy. The simple margarita pizza and spaghetti aglio olio simply blew our minds. It’s the magic of fantastic ingredients, culinary skills and house wine coming together to welcome us to Italy. It was special. Though the waitress and chef couldn’t speak English they spoke entirely in sign language to prepare us our delightful meal. Rome makes pizza’s with a thin base and the top is solid – as in the cheese has set and taken shape. The pasta was cooked till al dente, beautifully. 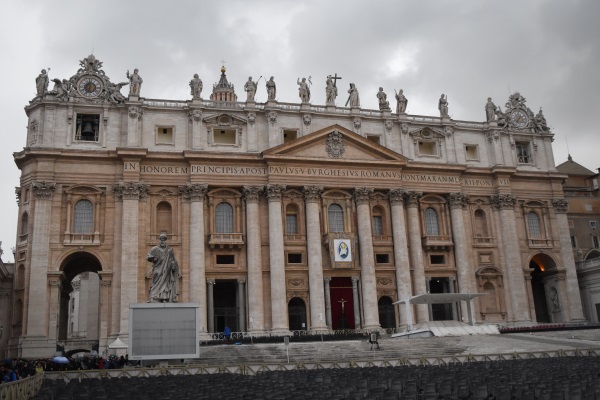 We decided to visit the Vatican on our first day. We booked a tour with Dark Rome. Tours are helpful to understand what you are going to see. It was an afternoon tour so we grabbed some lunch before we got started. Surprisingly, the food around the vatican area was quite good. Usually touristy areas are not known for good food.

The tour covered the Vatican Museum with tonnes of history leading up to the Sistine Chapel which contain the famous frescos of Michelangelo – The Last Judgement. Unfortunately we were a little late and the direct access to St Peter’s Basilica had closed. We had to walk all the way around and re-enter from the St Peter’s Square and this caused us to lose over an hour.

This two thousand year old monument is just wow. It is bang outside the metro station and it’s brilliance smacks you in the face as you step out. Eat and arrive, the cafe outside is .. meh. We picked the Livitaly tour for this. It was a great tour, it was private and not more than 6 people in a group. We were just 4. We didn’t have to wait in the never ending lines. We had special underground access, pit access and 3rd floor access too. The guide was excellent and all info I’m about to present is from the tour. We also landed on the National Day and got to witness a parade, quite cool.

The Colosseum is an incredible piece of architecture. The tour included access to the underground level. The underground was the backstage back then. While an event was happening on top, the next act was prepped below. There are elevators that were used to get the wild beasts to the arena on top. People, back then, didn’t travel much and hence had never seen tigers or bears. Beasts appearing out of nowhere took the theatrics to levels of God. The underground has horizontal rock structures that defy gravity and are, even today, are considered to be the most earthquake safe spots. There is a freshwater river that flows under the Colosseum – the word is that this was directed to flush and clean the carcass. The place was known to have quite the stench. The centre of the Colosseum revealed a secret underground passage that leads back to the Palace. The emperor was the people’s God, he needed to appear out of nowhere and so he did.

The Colosseum hosted 50,000 spectators as they sat and watched the horrors unfold one after the other. White sand was imported from far lands to ensure the blood was more visible. Why did people sit and watch? Because they were given free food and wine and for many poor families this was a lot. The edges of each levels had a proper toilet and drain system. You can still see a lot of the marble which once covered the brickwork of the Colosseum. 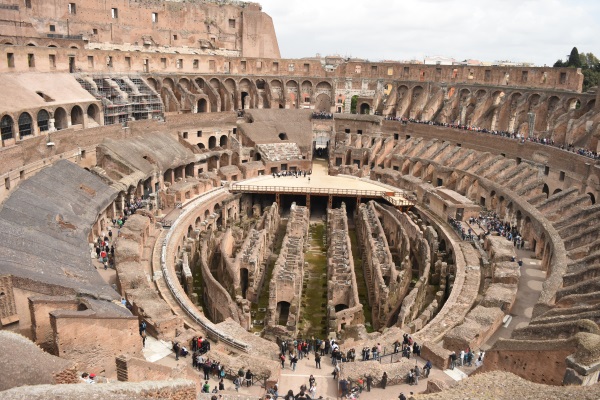 If you aren’t sure of the events that were held, here they are :

These were the least gory. Gladiators were a brotherhood. They were highly trained over a decade and knew how to give non-lethal blows. They weren’t huge people as the movies make them out to be. They had big bellies and were really swift in their movement but didn’t last over 10 min. So if they had to take out an animal, they’d have to do it quick. The Emperor’s thumb up or down to indicate if a gladiator should live or die is more for the movies is not accurate. In reality, the Emperor would point to the Earth if he wished to spare the gladiator or point to the sky which meant death. 95% of the time the gladiators were spared, after all they were trained resources. In fact, many gladiators were given their freedom. But like Shawshank Redemption, gladiators didn’t understand what it was to live in the outside world, they would end up committing suicide.

Slaves were sent to the arena, provided a dagger and have a tiger or a bear released on to them. The guess is the fight lasted 10 seconds. Slaves weren’t given weapons ahead of time. One would imagine that a slave with a weapon ahead of time would be dangerous. Nope, all the slaves in the underground are hearing other slaves being tone to bits by some form of a beast. If handed a weapon ahead of time, they would kill themselves.

This is where various criminals were tortured and killed. The Romans really understood max pain quite well. They knew how to keep their victims awake and alive for as long as they could and tortured the criminal via means of flaying, crucifixion and then eventually burning alive. Some had molten metal poured down their throats and others were put inside a metal cow-shaped container and cooked alive. Crazy right? While the audience did not necessarily love to watch this, they were there for the factor of food. 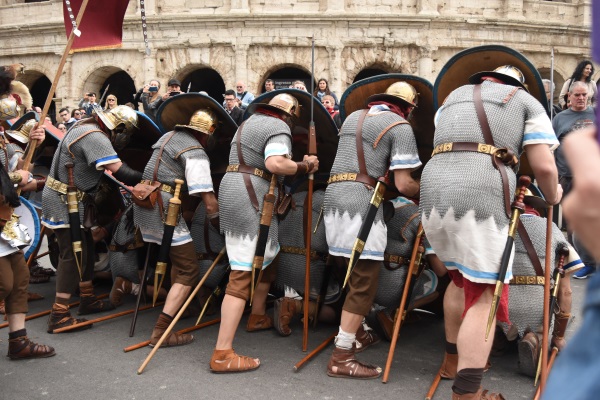 This is an ancient Roman chariot racing stadium. It’s near the Colosseum and was a part of the tour. It is extremely huge. While chariot racing is not conducted there anymore, concerts are held there today. We got an aerial view of the arena and it’s quite a fantastic view.

This is one of the major hills within the city of Rome. This was part of the Colosseum tour too. We were taken through the Emperor’s palace here. It is incredibly huge built on acres of land. It even got a mini amphitheatre inside. One could get lost here. The palace was home to one of the maddest kings of the time and he lived here alone. He got various secret passages built to spy on his own staff. Ironically, he was killed by his own guards. Remember that secret passage inside the Colosseum? It leads inside this palace. 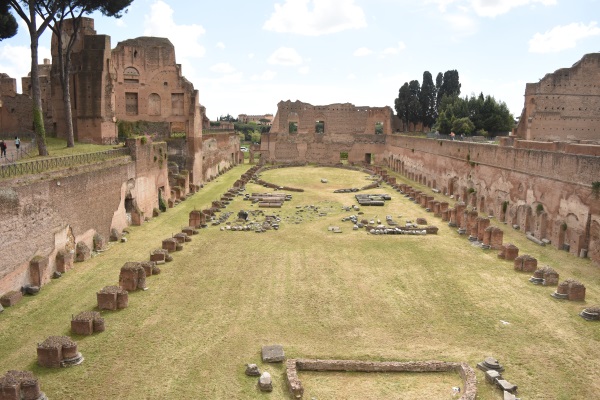