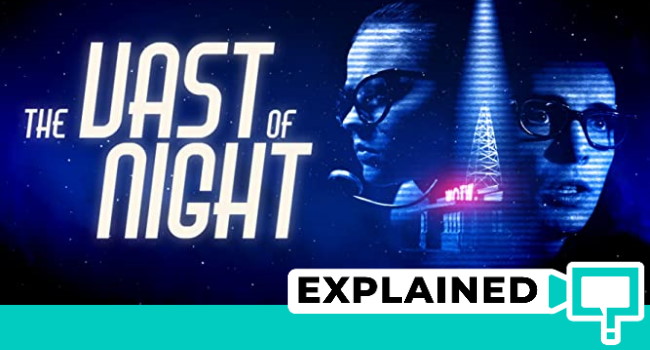 What was that ending?! The Vast Of Night, directed by Andrew Patterson, is a super-light, super-engaging science fiction film set in the 50s in a small town. The movie was produced for under $1 million and is centred on two people who stumble upon a mysterious audio signal and decide to trace its source. The Vast Of Night cast includes Sierra McCormick and Jake Horowitz in the leading roles. The film is a beautiful cinematic portrayal of the eerie occurrences on a silent night in the backdrop of a quaint little town. The acting is spot-on, and you really engage with the characters. This is Barry, welcome to my site, and here’s the plot summary and the ending of the 2019 film The Vast Of Night explained, spoilers ahead.

You can rent or buy The Vast Of Night by clicking below:

The Vast Of Night: Plot Explanation

Here’s the deal about the film. When you sit to watch an episode of, say, Twilight Zone or Amazing Stories, as audiences, we don’t get nosey about the “why”. We enjoy the mystery of it being left open-ended. However, when the same subject is made into a film, we tend to want more answers. So if you watched this expecting it to be a film about aliens, you would be thoroughly disappointed. The movie is a lovely showcase of the events leading to an abduction. The concept is age-old; however, the presentation is fresh. This film additionally gives us a quick glimpse into the relationship between Everette and Ray and how she’s teased by many; it’s the onset of a possible love story. The plot is set in the ’50s and subtly shows us the difficulties of being a woman of science or a black person or even an old person. It’s not just nostalgia for the otherwise good times.

What is the movie about? What is that noise?

The film is about alien abduction. The movie captures the events of one night in a small town on the day of a basketball game. Fay, a switchboard operator, intercepts a strange signal on her radio. Later, she gets a call from a lady who says she’s caught in a cyclone and this call also ends with the same sound in loops. As the lead characters Fay and Everette (a radio show host) investigate the noise and trace its source, they end up isolating themselves and get abducted. 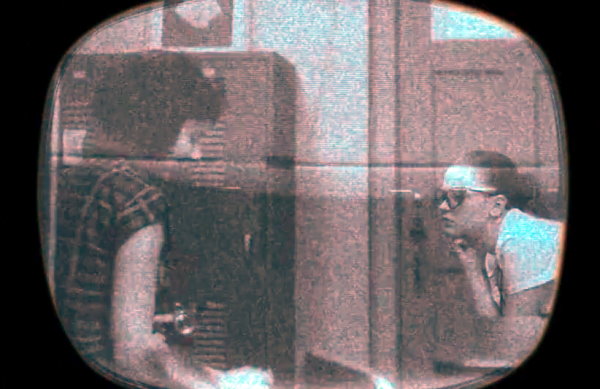 What is the Television Program – The Paradox Theater?

The director of The Vast Of Night explains this about the television sequences (The Paradox Theater):

We knew everything in the movie was not original. The blinking lights … the sounds. If you take the TV Program part of it away, the critics will start saying, this is the same story… and it is the same abduction story. It’s the story of somebody getting sucked up into space. And we wanted to take that and say, we know what we’re doing, and we’re going to do it differently. We wanted the movie to feel anything like Night Gallery, to Twilight Zone, to X-Files. We wanted to crawl into this space and do something new.

In short, the recurring old television sequences were to give us the sense of watching one episode (The Vast Of Night) of an eerie show called The Paradox Theater. But as you step into the TV, you witness the same story told uniquely and captured cinematically.

You can check this video out for more details about the film and its making as explained by the director, Andrew Patterson.

Who is Billy in The Vast Of Night?

Billy is ex-military. When Everett plays the strange noise on the radio and asks his listeners if they are familiar with the sound, Billy calls to say he is. Billy explains that back in the day, he was flown out to a secret location in the desert to dig a giant hole which was used to enclose what he suspects to have been a massive spaceship. After that, Billy remembers getting into the plane and on the radio heard the same sound that Everett played on the show. Billy explains that he and the other men who dug the bunker got sick from radiation poisoning. He adds that one of the men had heard the same sound elsewhere on a similar job.

The bottom line is that the government is aware of alien activity. They are periodically able to seize spaceships and study them from time to time. 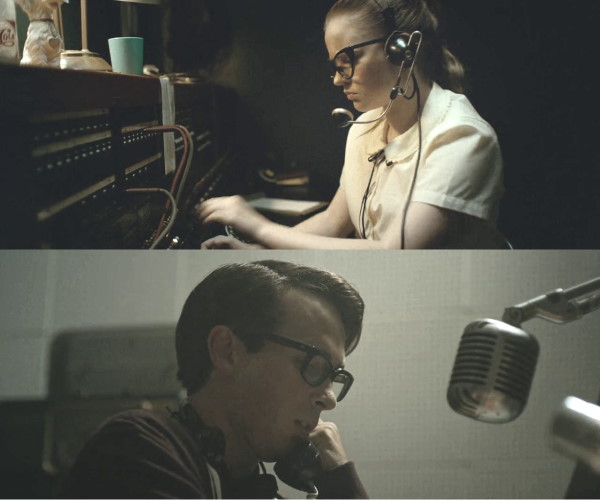 Finally, Billy describes that the sound was some sort of communication between two entities. He discloses that an airforce person from Everett’s town has a copy of a tape which has the recording of the odd sound. Fay finds out that the airforce man is dead, but his tapes are in the museum. She gets all of the cassettes, and together, Fay and Everett locate the tape with the same sound they’ve heard all evening. Soon as they play it, the radio station loses power.

Frequently playing the noise from the radio station seems to have alerted the aliens that Everett and Fay are on their tail. If you notice, no one else loses power, this is a targetted move on the radio station.

Who is the old lady, Mabel Blanche?

Blanche is an aged woman who calls the radio station after hearing the broadcasted noise. She has had a past experience that makes for a companion story to Billy’s. She refers to the aliens as people in the sky. Blanche narrates a story about the Boles Acres Raid, a time when an entire train was found empty; presumably, all abducted. A sole passenger had jumped off the train and found her way to town in a dehydrated state, and was taken in by Blanche’s guardians. One night, the girl was found muttering something in an unknown language in her sleep; the next morning, she was gone. Blanche eventually has a son who whispered the same alien words at the age of 10 months. Creepy eh? Her son grew up, chanting the strange words occasionally. Blanche learned that saying the words seemed to result in some sort of mind control over her son. Finally, when her son was nine, he walked out of the house one night and disappeared. His footprints abruptly disappeared; he was abducted.

What Blanche is saying is that the aliens speak to humans in their sleep using advance radio. That they play with people’s minds and keep humans distracted and at war so that the aliens can hide in plain sight. And because of them, humans don’t have free will. She also states that the aliens like to get to people when they are relatively alone. She takes the example of the present-day when most of the town is at the game.

What is the relevance of that long, continuous take?

That long shot which moves from Fay’s location all the way to the game and then to Everette’s radio station was painstakingly put in place to give the audience a sense of the geography and relative positions of Fay and Everette with respect to the rest of the town who are at the game. You can see how isolated Fay and Everette actually are because of this sequence.

The Vast Of Night: Ending Explained

The ending of The Vast Of Night reveals the alien ships. We see a mini-cyclone created around Fay [, the baby] and Everette by the smaller of the crafts that hover over them. At the very end, we are shown footprints of Everette and Fay besides the recording device Everette was carrying that’s left behind. The footprints mysteriously end in the middle of the field just like Blanche’s son’s. I suppose Everette and Fay got a little too nosey for comfort. Besides, they ended up in an isolated spot far from the rest in the city and became easy targets for the abduction.

Blanche was telling the truth, we know this because back in the car when Everette plays the Blache’s muttering on the recorder, the two in the front seat passengers start looking up to the sky, in a trance. So it appears that the alien words, no matter who chants it, seems to have the effect of mind control. It’s just that the humans don’t know the language and therefore have no clue how to use it, but the aliens do and will continue to do so. Why are the aliens doing this? Well, why do we do what we do to lab rats? Experimentation. To learn things.

Like I mentioned in the beginning, this is not a film about why the aliens are abducting people; instead, the movie presents an innovative cinematic version of the very familiar and mysterious abduction story.