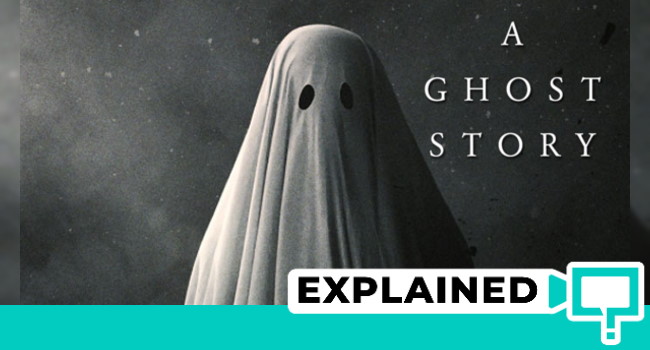 A Ghost Story is not a horror movie. And no, this is not a spoiler. This is to ensure that you go watch it with the right expectation and aren’t left fuming. It is, however, a supernatural drama. The film stars Casey Affleck and Rooney Mara in the lead roles. The film is written, directed and edited by David Lowery. I found the film a little depressing, I think you are supposed to. However, this is not an article intending to review the film so let’s get down to the plot. Here’s the film A Ghost Story explained, spoilers ahead.

So, the lead characters never really call out to each other and they are credited as C (Casey) and M (Rooney). I’m going to run through the plot linearly. C and M are a married couple and move into a house. They seem to be a happy couple. They live in that house for a while. I could be wrong but C is shown to be a musician who is not very successful. He does produce music, even lets M listen to his compositions now and then, but hasn’t found commercial success as such. The scene where M listens to his entire song is a little inconclusive. M completes listening but leaves without much of a reaction or feedback. She tears up. Perhaps over time, she would like to move on from what they have been striving to do. A part of this includes moving out of the house. Also, M, as a little girl is used to moving houses regularly. However, C doesn’t want to move. He feels there is a history to the house – we’ll get to this later. Over time, he seems to have become mellow. Perhaps because his career is not taking off.

Here are the lyrics of the song he’s composed:

Are you runnin’ late? Did you sleep too much? All the awful dreams felt real enough. Is your lover there? Is she wakin’ up? Did she die in the night and leave you alone? Alone. Mirror, mirror. There’s your crooked nose. What a stupid game. Getting nothing done with your longest track, your highest score, while you crush your back and lament the war. War. Am I runnin’ late? I get overwhelmed. All the awful dreams. All the bright screens. Is my lover there? Are we breakin’ up? Did she find someone else? And leave me alone. Alone.

Well, I’m going to go out on a limb here and call that “not so cheerful”. Perhaps the reason for M’s reaction to the song. But the other thing that you do notice about the lyrics is that it talks about a couple breaking up, death, finding someone else, and being left alone. All of that (but for the breaking up) actually happens. I’ll get to a theory on why C might have written this but a little later on. 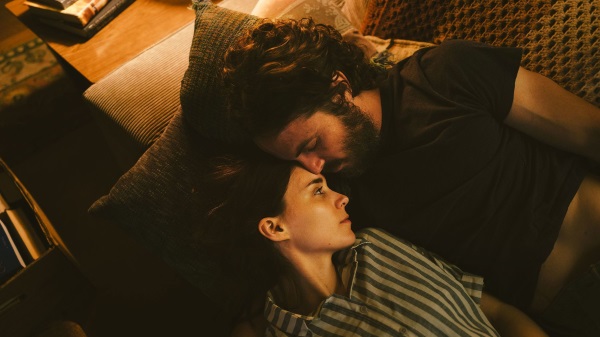 Eventually, C agrees to leave. Just then they hear a loud clang from the piano. They go to the living room to check. They can’t find anything. They go back to sleep. Again, we’ll get back to this scene later on. Soon, C meets with a car accident and dies. M goes to verify that the deceased is indeed her husband. M covers her dead husband’s body with the white sheets and leaves the hospital.

M wakes up as a ghost. He moves around the hospital without anyone noticing him, because, you know, he’s a ghost. Initially, a viewer could get confused with the depiction of this ghost with the sheets over its head. But C is dead and he’s now a ghost, we’ll call him Ghost-C. He approaches a wall with a light shining from within. This is probably the window to the afterlife. Ghost-C isn’t quite ready yet. He moves away from it and the window closes. Ghost-C makes his way back to the house.

He sees M mourning the loss of C. We are shown a 4-minute scene of M eating a large pie. She’s not enjoying it. She’s just unable to cope with the loss of C. She eats so much that eventually, she vomits. She’s grieving, it’s a process. All the while, Ghost-C is right there watching.

Time passes. M goes about her days in a monotonous fashion. Ghost-C is independent of the concept of time. He’s just an observer. Ghost-C also sees another ghost in the house across the road. The other ghost says that she is waiting for someone but can’t remember who. This shows that the other ghost has been around for a very long time. Eventually, M moves on. She’s dropped home by another guy. Ghost-C is angered. The lights fluctuate and he knocks some books down. M notices that the book lying open on the floor is “A Haunted House”. 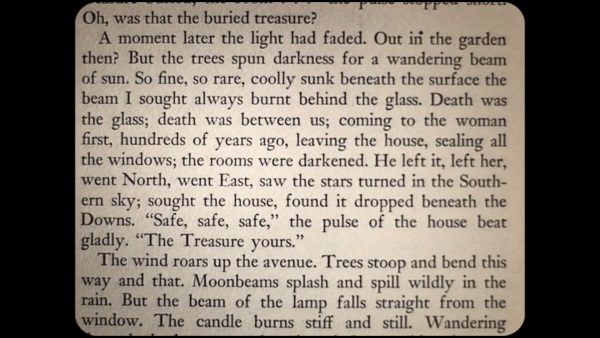 Later on, M listens to the song composed by C when he was still alive. She remembers being moved by it. In time, she finally decides to leave, move on. The house gets emptied. She writes down something on a piece of paper and slips it into the cracks of the door frame. Ghost-C is left alone. Just as Ghost-C tries fishing out the note, the next set of residents come to live in the house. We are shown that the children are able to sense the presence of Ghost-C. Hit upon by a lack of purpose, Ghost-C eventually loses his shit and behaves like a ghost we’re all used to seeing. Ghost-C begins to throw plates and break them. The family screams in terror. Next morning, the mother calmly collects the broken shards, her sanity, and gets the hell out of the house.

A lot more time passes by. Many residents stay and vacate the house. We are shown a party thrown by one such resident. Ke$ha, the Tik Tok girl, has a little cameo here. One of the dudes in the party breaks into a monologue about how everything, no matter how great, will always come to an end. It’s really not a very captivating speech but the essence of it is that eventually time will cause everything to fade away and in the end, time itself will fade away. Ghost-C is standing there, listening, in pain, I’d imagine.

Still trying to get the note

Years pass, the house is left dilapidated. Ghost-C still wants to get to that note M has put in the crack. Just as he gets near it, a bulldozer tears the place down. The note is lost. At this point, the other ghost from across the road states that who she’s waiting for is not coming and leaves in a poof of a falling blanket.

Time passes and a high-rise building is created in the place where the house stood. Ghost-C continues roaming the area, lost. He eventually decides to end it all (as in, end being a wandering ghost and move on to the afterlife) and jumps off the roof. But that doesn’t happen to be the method to leave to the afterlife. Instead, Ghost-C goes all the way back in time. To when the very first inhabitants move into the place where the house will eventually stand. The 19th century. Ghost-C is independent of time and is now going to loop back and experience the centuries that have passed.

The first inhabitants are rudely interrupted by arrows to their chest. Ghost-C witnesses the carcasses rotting. Centuries pass. Ghost-C finally loops back to the time when C and M first move into the house. Ghost-C witnesses C and M live their lives in that house again. 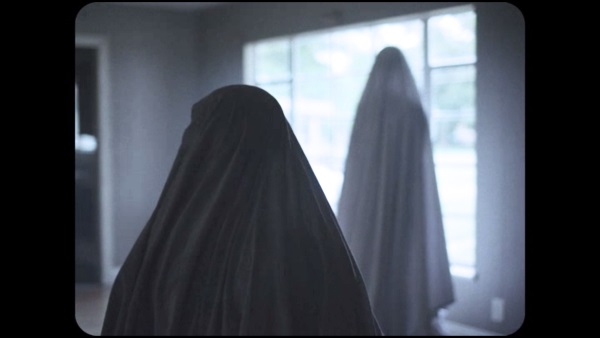 So you see, Ghost-C was already in the house when C and M first moved in. The “history” that C mentions that the house has, in a vague sense, is the history seen through a dead version of himself who is also in that house. This also circles back to the lyrics of the song. They are things that are going to happen, witnessed by a dead version of himself. This is pure speculation. I’d love to see other theories around this. Please do drop a comment below.

One night, Ghost-C sits down at the piano causing a loud clang to happen. This is the same clang that M and C wake up to earlier on. When they come to check, they obviously can’t see Ghost-C and they go back to bed.

Then C dies. Here’s a confusing bit. Ghost-C witnesses Ghost-C-2 go through everything that Ghost-C once when through. Furthermore, Ghost-C-2 can’t see Ghost-C. This means that Ghost-C might stay on in an eternal loop. Ghost-C now has access to the door frame again. He fishes out the note. Soon as he opens the note, Ghost-C, too, vanishes in a poof of falling drapes.

What was in the note?

Now, let’s go back to what M talks about when she was a young girl.

When I was little and we used to move all the time, I’d write these notes, and I would fold them up really small and I would hide them in different places, so that if I ever wanted to go back, there’d be a piece of me there waiting. They were just like, old rhymes and poems. Things I wanted to remember about living in that house or what I liked about it.

I don’t feel that M senses Ghost-C’s presence in the house and is writing a note to him. She’s just following her routine practice of leaving a note in the house she’s now leaving. It is “a piece of her” that she’s leaving behind. She also mentions that what she wrote in her previous notes were old rhymes and poems, things she wanted to remember. She is shown to cherish the song C once composed. It is likely that she wrote down a verse from that song, a rhyme. Ghost-M has finally got to the note which represents a “piece of M”. Assuming that the content of the note was from his song, it gives him added closure. He breaks out of his eternal loop and moves on to the afterlife. The film ends.

That’s all I’ve got. It would be great to see other thoughts around this ending. So please do write in. 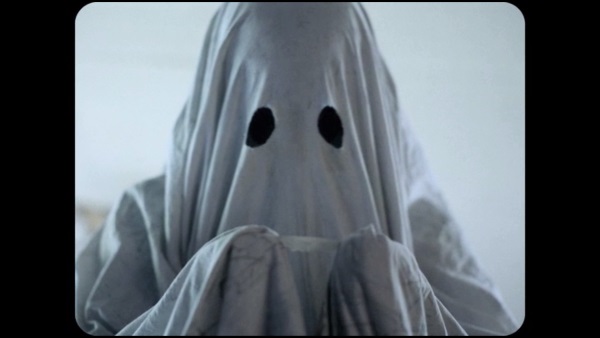