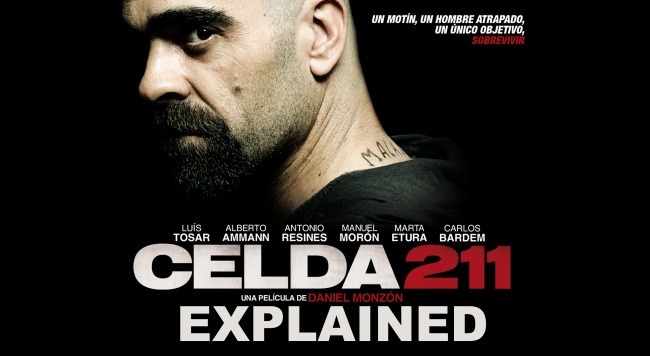 An honest prison guard to-be gets caught in the middle of a prison riot, acts the part of a prisoner, loses his wife to police brutality, becomes a murderer, and dies at the hand of an informant; all in half a day. Here’s the plot and explanation of Cell 211.

Juan Oliver has taken up the job of a prison officer and reports in a day earlier to make a good impression. His wife, Elena, is pregnant with his baby. During the prison walkthrough, a piece of concrete happens to fall on Juan’s head and knocks him unconscious. Malamadre, a prisoner, has been scheming a prison riot. As fellow officers take Juan into an empty cell (211) to give him medical assistance, Malamadre breaks free. Cell 211 is where a previous prisoner killed himself because of insufficient medical attention is given to him; the pain of his cancer makes him commit suicide. As the riot begins, the officers are forced to leave an unconscious Juan in the cell. Malamadre demands better conditions in the prisons. He uses the Basque terrorists associated with ETA, who are in prison, to gain leverage.

Since Juan is in plain clothes, he acts like he is a new prisoner of Cell 211, and everyone believes him. He is optimistic that he can trick his way out and plays along with Malamadre but riots begin outside of the prison and things soon become political. Apache, one of Malamadre’s guys, is a police informant. Both Juan and Apache find out about each other’s relationship with the cops and play quietly. Elena learns of the prison situation and goes over. Utrilla, a cop, carelessly batters people outside the prison and in the process, he beats Elena unconscious and leaves the scene. Someone known to Malamadre happens to capture a video, and Malamadre shows this to Juan. Juan demands to meet Utrilla.

Utrilla is sent inside, Juan demands to be taken to his wife but is told that she is dead. To save his skin, Utrilla announces that Juan is a guard. Juan has lost everything and overcome by rage, he kills Utrilla by slitting his throat. Knowing that he can never leave, Juan tries to hang himself in Cell 211, but the attempt fails. Malamadre is not smart enough to work through his demands. It is evident that the cops are going to say yes to what he wants just to take back the prison’s control. Juan always knew his, but now that he has lost Elena, he displays Utrilla’s dead body to the government messenger and ups the game by demanding the government to accept on live media, this way it can’t be a false promise.

With Juan turning against them, the cops reach out to Malamadre with proof that Juan is a guard. Malamadre considers this but also notes that Juan did mercilessly kill Utrilla. So Malamadre tells Juan that he knows about him being a guard and that after the riot ends only one of them will live. The government never intended to agree to the demands in the first place, so doing it on live TV was out of the question. They take information from Apache regarding the hostage location and send the special forces in. In the commotion, Apache knives and kills Juan. He also mortally wounds Malamadre thinking he’s dead but we are soon shown him being taken out alive on a stretcher. Malamadre vengefully looks at Apache as the film comes to a close.