Nacho Vigalondo is the boss-man who wrote and directed the Spanish brilliance – Timecrimes. Colossal too, has been written and directed by him. It’s a pretty amazing concept and stars Anne Hathaway in the lead role of an alcoholic woman. She goes on to realize that she seems to have a mystical connection to Seoul. The story is about Anne’s character going about life and facing her demons. I’m going to jump right in and try to explain the plot and the ending. Spoiler Alert

Okay, first things first. I’m not fond of metaphorical movie explanations. They are way too open-ended and can lead to endless arguments. So I’ll try and keep it as high-level as possible. So yeah, bottom line – there is no actual monster or a robot. Let’s start at the top.

Gloria grows up in a small town. She’s friends with a boy named Oscar. Oscar has issues. He can’t stand it when other people do well in life.One day, on the way back from school, little Gloria’s miniature city model flies off her hands due to a gust of wind. The miniature model seems to be some sort of school work. The model flies over to the other side of a fence. Oscar goes after it. Gloria follows. She witnesses Oscar stomping over and destroying the tiny model city. If you have a look at the scene, you will notice that Gloria’s model is more elaborate than Oscar’s. She’s scored better in class as a result (most likely). Oscar resents that and destroys her model. This part is shown later in the film as a flashback. We see lighting appear over Gloria’s and Oscar’s heads. This represents their inner monsters surfacing. As their bags drop we are shown two toys. Gloria’s toy is monster (Kaiju) and Oscar’s is a robot. It’s clear from this scene that the monster and robot represent their inner demons. At the same time this happens, we are shown a scene in Seoul where a little girl and her mother are walking in a park and see a monster (kaiju) appear out of thin air. 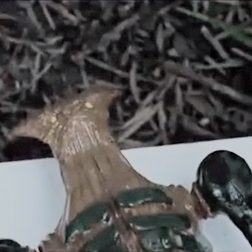 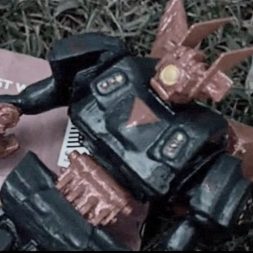 What’s the deal with the monster?

This is where the film’s metaphorical element kicks in. All that you see in the film is not necessarily happening. Some events do happen but the supernatural ones are purely metaphorical. Hence, this is not a monster movie. The monster is a representation of Gloria’s inner demons. The first monster appearing (25 years back) represents one of the first incidents that Gloria goes through which paves the way for her life to come.

What’s up with Korea, why Seoul?

Well, Seoul is the opposite side of the Earth to America. There is a 12 – 13 hrs difference in time zone between the two places. Metaphorically it’s a place which is behind Gloria, what she can’t see. Something that is not in her area of vision. When Gloria ends up doing something, it affects a lot of people. She doesn’t see that it affects others. The monster appearing in Seoul and hurting people is indicative of how her actions have consequences on others that she is not bothered about.

What’s with her scratching her head?

The moment Oscar destroys her model, she’s very, very annoyed. She develops a tick of scratching the top of her head every time she’s perturbed and is stressed out. You can see her doing this through film. It is also how she connects with the monster later on.

25 years pass. We aren’t shown what are the various situations that Gloria has gone through in these years. But we can assume that there have been moments that were testing enough to push her towards alcohol and bad influences.

Gloria (Anne) is a column writer for a NY magazine. She lives with her boyfriend Tim (Dan Stevens). She’s an alcoholic and is unable to hold a job. She’s constantly out drinking with her friends. Tim gets tired of her never-ending excuses and throws her out of his house. One thing to talk about here is that Tim is a very controlling by nature. He has a set expectation. He doesn’t respect Gloria doing ordinary jobs and pushing through with her life. He’s materialistic and expects Gloria to fit in. Gloria is forced to move back to her hometown and live in her childhood home (which is now empty).

She meets Oscar again. He’s running his dad’s bar. He used to have a girlfriend who he was planning to get married to but it didn’t work out (she probably found him too dominating and left him). Initially, he comes across as a nice guy. But he’s still the same person he was as a kid. He sees Gloria, who is run down in life, and decides to be nice to her. His being nice is offering her furniture and a job (at his bar) and demands loyalty in return. Oscar has a couple of friends – Garth and Joel. Garth seems to have been a coke addict and is now clean. Joel is a nice, quiet chap. Gloria joins them and they engage in drinking all night long. Gloria finds Joel attractive, he tries to kiss her, Gloria pulls back. Oscar sees this and gets super angry. He perhaps feels Joel killed his shot at Gloria.

Effectively, Gloria has moved from one drinking life to another. Right about then the mysterious monster appears in Seoul. Gloria doesn’t notice it initially but the monster appears every time she passes a small park. She later notices that the monster’s actions are exactly what she does in the park. It has her very familiar tick, scratching it’s head. She confirms this is true by doing a bunch of hand movements at the park and later watching the news where the monster does those exact moves. She shows this to Oscar, Garth and Joel. As she’s fooling around, they see the monster doing the same on live news. She accidentally trips and falls. The monster falls killing hundreds of people. The intent of the scene is to show how Gloria’s careless and immature acts hurt people in ways that she’s unaware of. But now, when she wakes up, she realizes that her fall would have killed hundreds. She is slowly beginning to acknowledge how her carelessness is affecting people.

Moving on, the next day Oscar shows Gloria the newspaper which now has a robot standing over Seoul too. Oscar mentions that is him as he was in the park too. Oscar helps Gloria get a translation in Korean that states – “I’m sorry, it was a mistake, it won’t happen again”. She writes this on the park and as a result, the monster writes this in Seoul. People cheer. This action is Gloria repenting her immature actions of her past. She’s making peace with herself. She decides to stop drinking.

She heads to Joel’s and spends the night with him. Next morning they both run to the park as Oscar is drunk and is hopping around in it. He sees Gloria with Joel and gets jealous. Gloria slaps Oscar and asks him to leave. He does. In Seoul, people see the monster slap the robot. Gloria’s becoming a better person. Oscar’s dark side is coming forth. Oscar is trying to pull Gloria down with him. He forces her to keep drinking. She refuses. You can see Oscar burn his relation with his friend Garth too. Oscar threatens to stomp around in the park and kill people in Seoul. Gloria decides quit her job at the bar. She is someone who is generally unable to break away from bad influences and people – the drinking, Tim, and now Oscar. But now, she’s slowly beginning to stand up for herself. They head to the park and fight there. Next day, Oscar comes back apologizing and gives her more furniture (sent through Joel). But is only momentary. He’s the same guy inside. He latches on to Gloria.

Tim comes to town in the pretext of a business meeting, he tries to win Gloria back. Oscar, Tim and Gloria meet at the bar. Oscar is unhappy about the thought of Tim and Gloria getting back. Oscar blows up fireworks inside the bar. He’s just destructive by nature – be it the miniature city model or his own bar.

Gloria finds Oscar in her house that day. He mentions he has the keys that her parents gave many years back. After this, we are shown Gloria remembering her childhood moment with Oscar and his destroying her miniature model. She understands that she’s trapped with Oscar and needs to get out of this situation with him. They fight. Like, physically. They run to the park. Oscar beats down on Gloria and stomps around the park which destroys those areas of Seoul.

He uses this as a point of blackmail to get Gloria to keep working for him. In short, she’s in a bad relationship with a guy who’s abusive and uses blackmail to get what he wants. He also goes into an apologetic mode to mislead her and keeps pulling her back. He’s the kind of guy that doesn’t want to get anywhere in life and doesn’t want anyone else doing well either.

The ending is about Gloria breaking free from a whole bunch of bad relationships. First off, she tells Tim that she will not be joining him. She realizes that Tim is not the right person for her. By now, she has already let go of her drinking habit. She now decides that she has to get away from Oscar and his abusive ways. She leaves for Seoul.

Though the robot and monster killing people in Seoul is only a metaphor, Gloria’s travel to Seoul could potentially be real. But considering she’s broke, “going to Seoul” is just indicative of Gloria “going to face her fears”. She has decided to mentally move away to a far off place, far away from everything that is weighing her down. In Seoul, she walks to where the robot appears. Back in America, Oscar is in the park. As Gloria approaches the robot, we see the monster appear over the park in America. Gloria bends down to pick up something. The monster picks up Oscar. Gloria flicks her hands. The monster flings Oscar away. The robot gets flung away. Seoul is saved. This scene represents Gloria standing up to the abusive Oscar. She, as the monster, now stands towering over him. She doesn’t fear him anymore. She overcomes her inhibitions. She chucks him away as if he were nothing. Joel sees Gloria on TV. This is an indication of Joel seeing a free Gloria.

She’s moved on. But in the last scene, she finds herself in a bar. She gets talking to the bartender. The bartender offers her a drink. Gloria makes a face. The film ends. Remember, Gloria is an alcoholic. Just like Oscar occasionally comes to his senses but goes right back to being a nutcase, Gloria too can go back to her drinking ways. Does she take the drink offered by the bartender or not? We don’t know. But we know that she has been through enough to say no to the drink this time around.