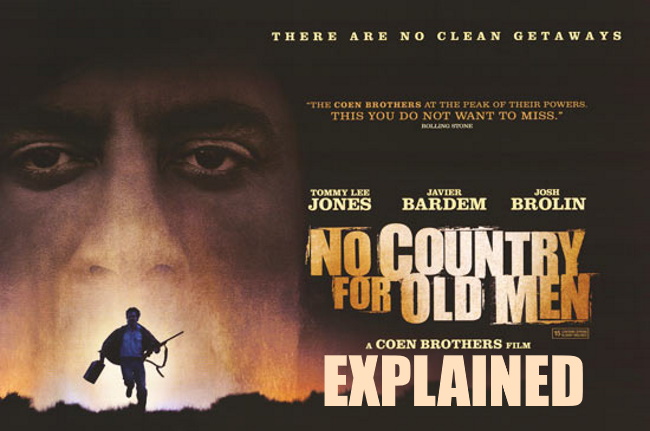 No Country For Old Men is a 2007 film directed by the Coen Brothers. The film is centered on a bag of cash that multiple groups are after. While the plot initially appears to be a classic hero-villain set up, it reveals to be nothing of the sort. The No Country For Old Men cast includes Tommy Lee Jones, Javier Bardem, Josh Brolin, and Woody Harrelson, to name a few. I understand why I got a bunch of requests for writing up this film. So without further ado, here’s the plot and ending of the movie No Country For Old Men explained, spoilers ahead.

Let’s first talk about the central theme of the film. This is not a good guy vs. bad guy film. Heck, it is not even a bad guy vs. a baddish-good-guy kind of movie like the old westerns.

No Country For Old Men: Characters

Anton Chigurh – A ruthless assassin hired to retrieve the money from a drug deal that’s gone wrong. Javier Bardem is so amazingly menacing in this role, I looked away from the screen every time he faced the camera. Now, Anton is clearly labeled as the principal ‘bad guy’. Pure Evil on two feet, destroying everything he touches.

Llewelyn Moss – The person we associate as the ‘good guy’ because he a veteran and isn’t murdering people. Llewelyn takes a stand against Anton, and by habit, we associate the opposite of Anton’s persona to Llewelyn. But this isn’t true at all, is it? Llewelyn happens to find himself in the middle of a drug deal that went terribly wrong. When he finds the money, he decides to steal it for himself, and not call the cops.

Carla Jean Moss – Llewelyn’s wife, who gets caught in the middle of all the chaos that her husband entangles himself in.

Carson Wells – Another hired hand looking to find Anton, and therefore the money. Again, he’s no righteous man himself.

Ed Tom Bell – The old sheriff looking into the case of the drug deal and following the trail of dead bodies. If anyone, we could perhaps label him the ‘good guy’. But he’s no man of action, in fact, he’s always a step behind.

The movie begins with a monolog from Ed. He talks about the time he and his father were both sheriffs. He also talks about how there was a time when some sheriffs never carried guns. Over the years, he saw the crime rate increase, and he eventually arrested a 14-year-old murderer who had no remorse for the crime he had committed.

The crime you see now, it’s hard to even take its measure. It’s not that I’m afraid of it. I always knew you had to be willing to die to do this job. But I don’t want to push my chips forward and go out and meet something I don’t understand.

Ed is growing old, and through the years, he finds that crime seems to have no rhyme or reason – like the 14-year-old who had always wanted to kill someone. 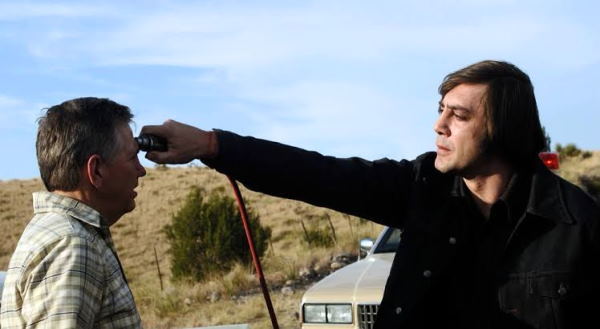 We are introduced to Anton, who kills a deputy sheriff and leaves unperturbed. Right after, he uses his portable high-pressure cylinder to kill a driver and steals his car. Anton sometimes uses a coin-toss to decide the fate of a person, like the gas station owner who he spares. In spite of Anton being established as the agent of chaos, he consistently follows his own internal principles.

Llewelyn finds a bunch of dead Mexicans and locates a bag of money. One of the severely wounded men is begging for water, and Llewelyn has none to give. He takes the money back home. Later at night, he’s struck by his conscience and decides to take a bottle of water over to that dying man. Well, obviously, it’s too late, and the dude’s long dead. But now Llewelyn finds himself being chased by men who are after the money. Llewelyn swims himself to safety, but he’s now marked because of his truck. He gets back home and asks his wife, Carla, to move to her mother’s place while he rents a motel and hides the bag of cash in the duct. 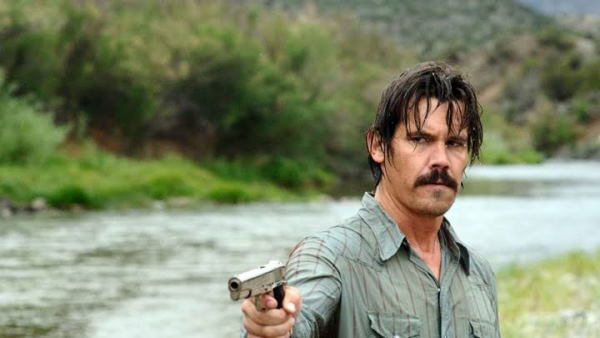 Ed shows up at the crime spot and begins his investigation. But he can’t make head or tail of the extent to which people would kill for money and drugs. Through the film, we’ll only find Ed playing catch-up.

Llewelyn outsmarts the folks looking for the money by renting another room adjacent to his and pulls out the bag from the duct and bails. Word gets out to the rival Mexican group about the location of Llewelyn, and they wait for his return in the room. Anton, who follows the tracker in the money bag, shows up and kills the Mexicans but is unable to catch Llewelyn.

Llewelyn relocates to another motel but suspects the bag might be bugged. By the time he locates the tracking device, Anton shows up, and they have a shoot out. Both Llewelyn and Anton get severely wounded. Llewelyn tosses the money bag over the fence and exits into Mexico. A band of merry men finds and admits Llewelyn in a hospital.

The guys who hire Anton also hire Carson to find the money because they seem to be losing faith in Anton’s ability. Carson locates Llewelyn at the hospital and tries to convince him to hand the money over, but he’s unsuccessful. On his way out, Carson happens to see the bag of cash thrown over the fence. Deciding he would come back later for it, he heads back to his hotel room. Anton ambushes Carson there and kills him.

Llewelyn calls Carson, and Anton picks up the phone. Anton says he’s going to find Carla and kill her if Llewelyn doesn’t hand him the money bag. Llewelyn truly feels he can take on Anton and refuses the deal.

No Country For Old Men: The Motel at El Paso

Llewelyn plays his veteran card at the check-post and gets back into America and retrieves the bag. He calls Carla and asks her and her mother to meet him at a motel in El Paso. He plans to give her the money and send her into hiding and then hunt down Anton. Unfortunately, a group of Mexicans traces down Carla and her mother and trick the old lady into giving up the location they are headed to.

This is not shown, but the Mexican’s head to El Paso, locate, and kill Llewelyn. Ed gets a call from Carla about their meet at El Paso and heads to the venue and sees the Mexicans escape in their truck. Again, Ed finds himself a step behind and is unsuccessful in protecting Llewelyn. He regretfully informs Carla, who breaks down crying.

What happened to the money at the end of no country for old men?

The Mexicans who kill Llewelyn Moss leave in a hurry and aren’t able to find the money. Anton shows up later at night at the crime scene. He locates the money because he knows about Llewelyn’s trick of hiding the money in the duct. We’re also shown that the vent grill has been removed.

Ed goes back to the motel at night and notices that the doorknob has its center blown out. Ed recognizes this pattern from all of the other break-ins and suspects Anton might be at the crime scene. Lucky for Ed, he doesn’t locate Anton else that would have been the end for him.

Feeling that he is overmatched by the criminals of the day, Ed decides to retire. He meets his uncle and tells him this, and his uncle responds telling crime has always been this way in the area from the early 1900s.

As promised, a couple of weeks later, Anton locates Carla and tells her that he has come to fulfill the promise he had made to her husband. She finds it ludicrous and insists he should let her go. Anton then pulls out his coin and asks her to bet her life on it. Carla is unwilling to play his bizarre game and asks him to take responsibility for his own actions and not outsource it to a coin. He kills Carla and keeps his word (you can see him checking his boots for blood as he exits the house).

There Are No Clean Getaways

As Anton drives out gleaming with satisfaction, a car crashes into his at an intersection. Anton’s arm is fractured. Two kids offer help, and Anton bribes them to not let the cops know that they saw him. In agonizing pain, Anton limps away from the scene of the accident.

The movie initially makes us believe that we’ll see the ‘Good Guy’ defeating the ‘Bad Guy’ and walking away into the sunset with the bag of cash. Soon we realize that no one was really ‘good’ and that they were merely after the drug money. We don’t even get our hero-villain showdown, and a third party kills off Llewelyn off-screen. Ed was the ‘good’ sheriff and only survived because he was outmatched and got to the crime scenes too late. No Country For Old Men ends with Ed recalling his dreams about his father, and indicating that he is the old man there isn’t a country left for. Over the years, he has lost the ability to understand crime and its nature and has accepted defeat.

Ed recollects two dreams about his father. One about losing some money that his father game him. And another one where he’s riding alongside his father in the cold. His father is carrying a splinter in a horn and goes into the dark to fix a fire. Ed feels in his dream that whenever he gets there, his father would be waiting. Ed was clearly fond of his father, especially the times they were both sheriffs. He has retired now and one day will pass away like his father, and the day he does, he believes he will unite with his dad. But for now, he has to live on trying to understand what the world is becoming.