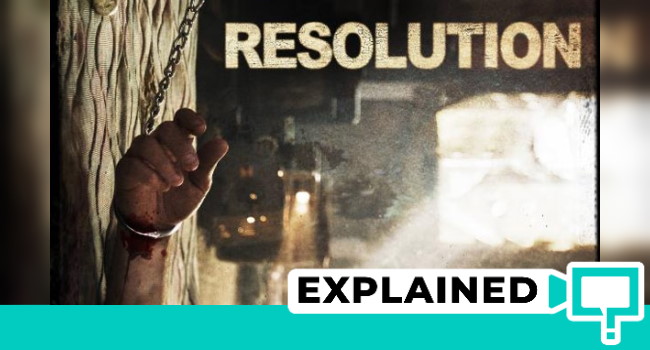 Resolution (2012) is the prequel to the movie The Endless directed by Justin Benson and Aaron Moorhead. Resolution is centered on Michael who’s trying to get his friend, Chris, to quit drugs. But once he gets to the cabin where Chris is, eerie occurrences begin taking place which escalates to a very convoluted ending. Of course, the movie The Endless gives more perspective, and so in this article I’ll go through the Resolution ending keeping in mind it is a prequel. Here are the plot and ending of the Resolution movie explained. Spoilers ahead!

In case you are looking for the explanation of The Endless, please go here.

There is a supernatural entity that has inhabited a specific area where both films are based in. The creature rarely reveals itself but has the power to send visual information to people based on what it sees in the past and the future. The Entity’s primary objective is to trap people in an endless time-loop to witness how these folks behave given the knowledge that they are stuck perpetually. From the movies, it is pretty clear that the monster can reach out to anybody in the city through pictures and videotapes.

Resolution sets up the universe perfectly with Michael Danube receiving a video of his friend Chris who’s unleashing himself; he’s going for the drugs like a famished wolf would go for a dead rabbit. As an intervention, Michael lands up at Chris’ location and handcuffs him to the wall to try and get Chris clean. Point to note here – the Entity has sent Chris’ information to Michael as a trap.

Not only is Chris flying high, but he has also made enemies with a pair of druggies and a Native American whose property Chris has occupied. Michael does his best and offers money to the druggies instead of the drugs that Chris owes them, and pays the Native American rent for a week’s stay.

Michael becomes very nervous with the many strange events that begin happening at the cabin: 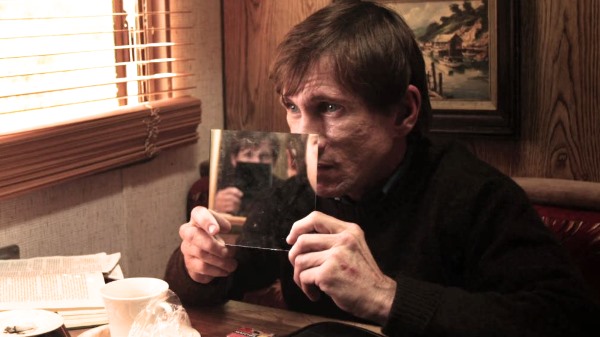 The French Man’s Trailer in Resolution

Michael meets a French man, Byron, at his trailer. Byron explains to Michael that he’s been around for 30 years. And that he initially came with two other French researchers who eventually fought and wandered off into the woods, never to be seen again. Byron tells Michael that he’s seen an infinite series of membranes and each one has a beginning, middle and an end. Byron is referring to the time-loops which he’s been stuck in.

Towards the end, Michael and Chris see images of their dead selves on the slide projector and footage of them getting killed by the druggies. Assuming that this is a future event they leave the cabin, and at the car, they find a CD which has audio of Chris and Michael being shot dead. They then find a film reel which shows them to be alive by a fire. Michael doesn’t want to leave in fear of taking the Entity back to his wife who’s carrying. The duo follow through with what they see on the reel and wait outside the cabin and watch the Native Indians kill the druggies and set the house on fire.

Chris finally commits to going to rehab, and Michael feels that this is a happy ending fit enough for the Entity and that they can now leave. He realizes he’s very wrong about this and the final scene has the Entity materializing in front of them. Chris bows down in fear and Michael apologizes and asks, “Can we try it another way?”. And in this, both commit the mistake of submitting to the Entity. As a result, they are cast into an eternal loop that runs for one week before resetting.

Now, please don’t stop here, do watch The Endless and click below to read the explanation of the movie: