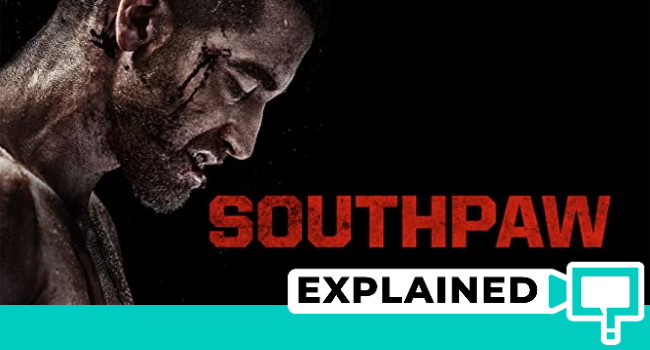 This movie was directed by the guy who gave us Training Day and Equalizer. I’m not sure what happened in Southpaw though. The problem is not with the actors either. The cast Jake Gyllenhaal, Rachel McAdams and Forest Whitaker carry their scenes very well. Heck even 50 Cent does a decent job of his role. I guess it is the writer then – Kurt Sutter. Kurt hasn’t written for other films. This would be his first, perhaps therein lies the problem. Here’s Southpaw’s plot hole explained.

Southpaw is the story of boxer Billy (Jake) who has been winning matches, has a lovely wife Maureen (Rachel) and kid. Life is good, basically. Maureen suggests that before Billy’s face is confused for a barbecued potato, he should retire, Billy agrees. Then, tragedy strikes in the form of a punk-ass boxer named Magic (Miguel Gomez).

Then more tragedy strikes, and then even more tragedy strikes. Life goes from looking like Pamela Anderson back in the day to Pamela Anderson today. All of the grand array of tragedies strike within weeks. Billy is now in complete ruins. This is the really annoying part. For the sake of introducing tragedy all logic is kicked out of the storyline. While your brain is expecting some obvious events, the story simply ignores them and moved forward.

Billy is at lowest point of existence and enters Tick (Forest). Tick then trains Billy and.. yeah yeah.. we’ve seen enough of these.

What happens when you shoot and murder a high profile person’s wife in a closed event with a traceable list of attendees? They catch the guy and put him behind bars.

What happens when the killer is associated to another upcoming boxer? The upcoming boxer’s career would end up being ruined once the information hits the news.

What happens when husband of said murdered wife presses charges, the upcoming boxer is going to run his pocket dry trying to make his way out of the case.

What happens in Southpaw when Billy’s wife is shot dead? Billy gets busted for drunken driving, loses custody of his daughter, loses all his wealth and becomes a sweeper at a dirty old gym. His daughter hates him. Magic Miguel magically walks scott-free, no questions asked, becomes a champion. After everything Billy is put through, he gets a silly shot at a title. The film celebrates Billy’s little boxing victory and Magic goes back the recipient of a Southpaw, back to his mansion. Tough life for Magic Miguel, must say, tough life!