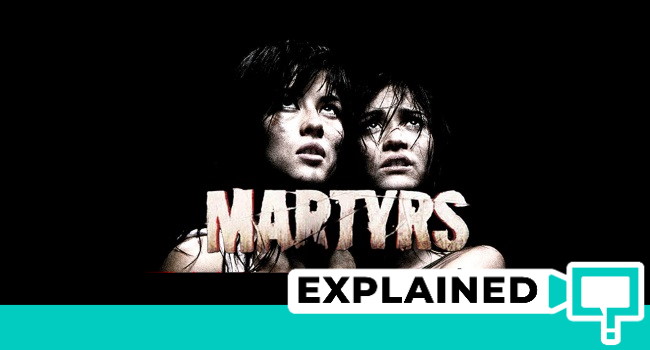 This article is related to the original Canadian-French film directed by Pascal Laugier. There was also a Hollywood remake in the year 2015. However, I believe the central plot confusion exists in both films. I got a bunch of suggestions from you guys to watch this film and explain it. So I watched it. And I was nowhere near ready to face the visual uppercut served by this film. There was no holding back on the gore. At all. So watch at your own discretion. Here’s the film Martyrs explained, spoilers ahead.

I’m going to keep this one short. The reason being the ending is up for speculation. There is no clarity presented by the film and that is done on purpose. Also, the film has two parts to it. The first part (about Lucie) is rather straightforward and doesn’t really have a bearing, from an explanation standpoint, to the second part (Anna’s transcendence).

That said, let’s walk through the events of this film chronologically. There is a Secret Philosophical Society, of freaks, who are looking to find answers about the Afterlife. They do this by creating “martyrs”. Now let’s take a step back to understand what “martyrs” means in the context of the film. The classic definition of the word is “a person who is killed because of their religious or other beliefs and is often admired because of it”. In the context of the film “martyr” takes on a more simplistic meaning from the Greek word “martus”. A word that means “a witness” or “a spectator”. Also, a “martyr” here is alive – one who has witnessed something and is still alive, else there is no proof of witnessing. The society creates these martyrs by inflicting a series of systematic torture upon young girls and children. The tortures eventually take the subject to a state of transcendence where they will “witness” insights into the Afterworld.

Lucie (Mylène Jampanoï) is one such young girl who is kidnapped by this group and is subject to these tortures. The tortures cause permanent damage Lucie’s mind. One day, she happens to push her captor back and this leads to the captor snapping her leg as she falls. Lucie escapes. Before escaping, she goes into a room where there is a woman who is in advanced stages of her torture. Lucie, being a young girl, is frightened and makes a run for it. Perhaps this woman is eventually found dead. Lucie is filled with guilt for leaving the woman to her demise. Eventually, she starts seeing illusions of this woman as a ghastly creature that inflicts wounds upon her. The creature doesn’t really exist. The film is a psychological thriller and not a ghost story. The creature is only the mind of Lucie. All of the wounds on her are self-inflicted but she doesn’t see it that way. According to Lucie, she sees a creature who wants her to find the captors and kill them.

Over time, Lucie makes a friend by the name Anna (Morjana Alaoui) at an orphanage. Anna is a girl who too has been through a tough childhood and is estranged from her mother. Anna believes Lucie’s claim of being visited by a creature, sort of. Over years, Anna helps Lucie track down the family that was involved in her kidnapping. Lucie enters the house and guns down the entire family. But this doesn’t stop the creature from continuing to hurt her. Like I mentioned before, the torture has created permanent damage to Lucie’s mind. Anna comes to the house and helps clean up the mess. Anna can’t deal with all the dead people around her. All she’s seeing is an innocent dead family. Somewhere, deep down, she’s doubting Lucie. Anna notices that lady of the house is still not dead and tries to help her. Lucie intervenes and bludgeons the lady to death. After this, Lucie feels cheated. She feels Anna too thinks that she’s insane. Well, she is. Lucie tries to make peace with the creature but there is no end. The creature continues to inflict wounds on her. At this point, we are shown that it is, in fact, Lucie inflicting wounds upon herself. Realizing that she can never be free of her guilt or insanity, Lucie slits her own throat and ends her life.

After this, Anna finds a secret passage that leads down to a basement. In here she finds a girl (Sarah) who has been tortured horribly. Anna tries her best to save this girl but other people from the Secret Society show up and kill the tortured girl. They take Anna prisoner. The head of the Society shows up. They refer to her as Mademoiselle. She explains what they are seeking. She also explains that they have experimented on children too. They have, over time, identified that young woman respond best to these tortures. Which means Anna is up next.

Anna is now subjected to the systematic torture. Finally, when you think it can’t get any worse, a dude shows up and takes Anna to another room. He flays Anna alive. Yes, flays, alive. They bring back a skinless Anna and clamp her down. Then it happens, Anna goes into a state of transcendence. The Society is apparently trained to confirm this by the look in the subject’s eyes. The food lady comes back screaming saying that Anna has let herself go completely. They call for Mademoiselle. 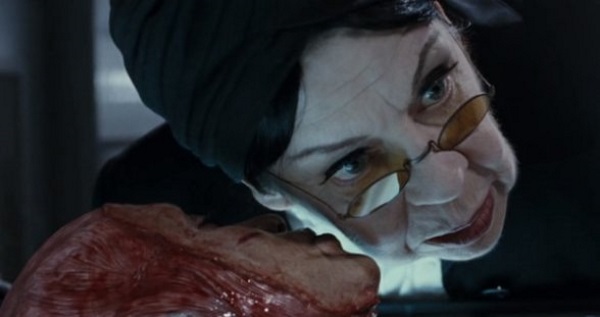 Mademoiselle comes in and meets Anna. She asks if Anna has seen the other world, the Afterlife. Anna nods and whispers something into Mademoiselle’s ears. So far, the society has seen 3 others who had reached the state of transcendence. But none of them could relate to what they were seeing. Anna, however, has been able to relate to what she’s just seen. After whispering, Anna is in a state where she is no longer speaking. The whole Society gathers to hear from Mademoiselle. The dude who makes the announcement to the rest of the Society goes to have a word with Mademoiselle. She’s in the bathroom, de-powdering her nose. This is the conversation they have.

After this, she blows her brains out with her trusty little gun while the audience sits wondering how a horror film that turned into a revenge plot, then turned into a torture flick, then into a mind f*ck film and finally ended with no answers. Well, that’s what the film turns out to be. It doesn’t give out any answers about the whisper. Which means we are going to have to speculate. Sigh!

Why did Mademoiselle splatter her brains all over the bathroom?

Imagine you were just beginning to watch the movie The Sixth Sense and someone told you the film’s ending twist. Suddenly, you don’t find the urge to watch the film anymore. There is an apparent loss of purpose. Similarly, imagine you were at a casino and someone guarantees that you will win nothing through the day. Suddenly, you lose the urge to be in the casino and gamble.

Life, in a sense, comes with a twist at the end – death. Many cultures believe that the purpose of life is revealed in the Afterlife. But what if it is the suspense presented by life that gives us all a purpose to live each day? If this suspense was removed, then suddenly, there would no longer be the urge to live.

What did Anna Whisper?

We will never know what Anna’s whispers were. But whatever it was, it leaves Mademoiselle with a knowledge that removes her purpose to live. She doesn’t want to give out the information to the Society as that will only lead to more suicides. The knowledge she has is overbearing and will most likely remove the will to live for everyone in the Society. So she takes her life without disclosing the secret to life, universe and everything. All she says is to “keep doubting”. Perhaps, it’s the “doubt” of the Afterlife that keeps humans from killing themselves right away and cut to the chase. It’s the “doubt” that gives life a purpose.

I’ll stop here. Folks, please share your thoughts on the ending and other perspectives that you have in the comments section. I would love to discuss other speculation on this ending.