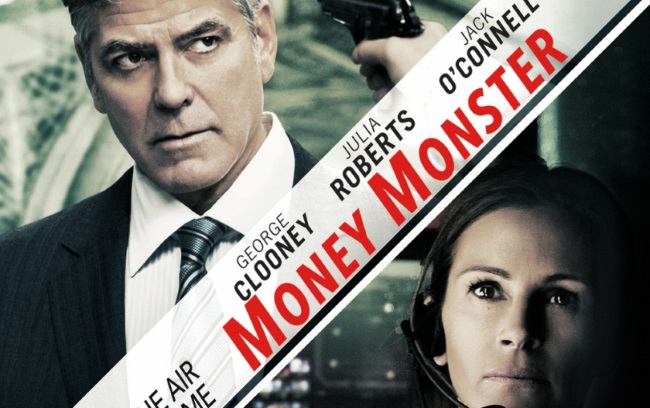 Money Monster stars George Clooney and Julia Roberts in lead roles and is directed by Jodie Foster. Clooney plays Lee Gates who is the star of the TV show by the name Money Monster. He’s a financial advisor and gives tips on stock investment during this over-the-top gala show. I think it is important to watch this film to know how much George Clooney struggles to dance. Yeah, he opens his shows with a little dance sequence involving 3 left feet. It’s fun to watch. Julia plays Patty Fenn, Lee’s director. Here’s the film Money Monster explained.

Lee and Patty work together like two halves of the brain, almost unrealistically in sync. She knows his every move during the show. The latest show is all set to interview the CEO of a company called IBIS Global Capital. IBIS has just lost $800 million because of a “glitch” in their trading algorithm. The CEO, Walt Camby, is played by Dominic West (the dude from the T.V series – Affair). Walt, however, doesn’t make the show as he’s traveling someplace. The show goes on air and is rudely interrupted by Kyle Budwell (Jack O’Connell). Kyle comes in with a gun and forces the production team to keep the show on air. Kyle hands Lee a vest with a bomb and forces him to wear it. Kyle is a labourer dude who’s taken Lee’s advice to invest in IBIS and ends up putting all his life’s savings, $60,000, into IBIS stocks. IBIS’s stocks have sunk thanks to the glitch and now Kyle wants answers.

The remainder of the film is about how Lee, Patty and the production team work to keep themselves from being blown up and start looking for the answers Kyle wants. While, the cops figure strategies to take out Kyle. As one would expect there is more than meets the eye and the story goes deeper into the IBIS glitch. It’s an average film because of the average plot. It’s one of many Wall Street money stories but with a slightly different execution. The story moves quickly and there is a lot of good acting but the ending, well, doesn’t pack the punch the start does. It’s a one-time-watch and has a few good moments of (intended) laughter in all the tension.

What was the “glitch”?

Well, Walt decides to siphon $800 Million from IBIS to invest in a mining company in South Africa.

That’s about it. Quite simple really.