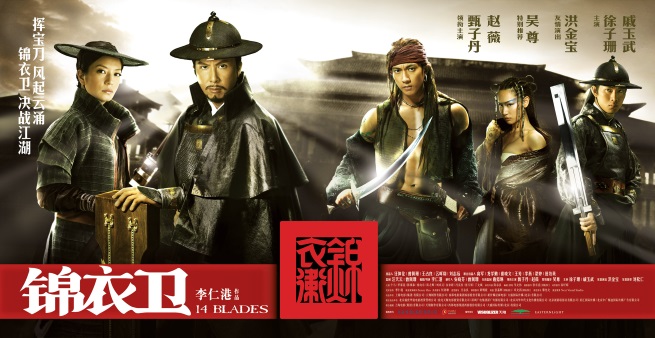 14 Blades is a period movie based on ancient China, the Ming Dynasty. Given the movie stars Donnie Yen (from Ip Man), you can expect plenty of martial arts. The story is about the Jinyiwei, one of who is Qinglong (Donnie) who is given this box 14 blades that he can selectively use with his awesome skills to kill people who get in the way of his mission.. phew. Qinglong is caught in between a corrupt imperial court, the emperor authority (the Imperial Seal), the rebellion, the Jinyiwei, Heaven’s Eagle’s Gang and Qiao Hua (the heroine, played by Zhao Wei from Shaolin Soccer). Here’s a short summary of the plot of the film 14 Blades.

All of the groups come together to form a reasonably good storyline. It is tough keeping track of which group wants what, especially with all the martial arts and flipping around. The bottom line is – Qinglong is in the possession of the Imperial Seal and the bad guys want it as it helps them gain authority. The other people get involved as and when they cross paths with Qinglong. It’s not a “one man fight all” kind of movie. Gangs either side with or against Qinglong and fight themselves off. It’s Donnie Yen, you’re either with him or get hit by him.

While Qiao Hua appears to be the damsel in distress, that is not her only role, thankfully. The leader of Heaven’s Eagles Gang is played by Wu Chun who shares a neat fight against Tou-Tou.The badass villainess is Tou-Tou played by Kate Tsui. It’s impressive watching her go toe to toe against Donnie Yen. The movie also sees Sammo Hung in a guest appearance as Prince Qing. With a name like that, how can you not want to be the King?